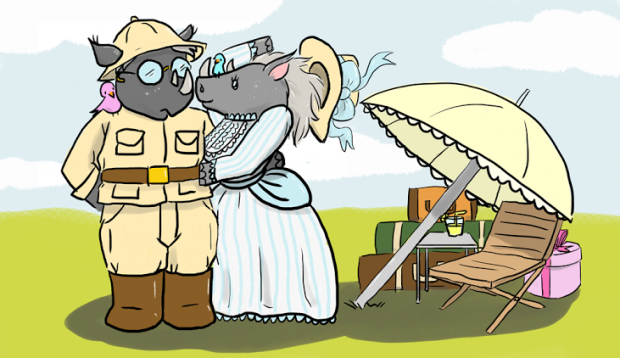 A Roomful of Shooters and Nothing to Shoot

There are three shooters on my flight from Charlotte to Dallas. Two middle-aged men in varying degrees of camouflage and another, younger man in a white nylon windbreaker with a hunting face mask. They’re going on a duck-hunting trip. I know this because one of them has a manila folder labeled “TX Duck Hunt Trip” peeking out from an open pocket of his laptop case. As I wait behind them on the jet bridge, I listen to the older men talk about their investment portfolios. The more vivacious of the two – a dark-haired man who’s trimmed his ear hair down to a shadowy stubble – changes tack abruptly and asks the younger man, “How’s that gun shooting?” He just blinks in response, and the older men laugh and call him gun-shy. “You’re giving me financial advice,” he says in his defense, obviously embarrassed. “Now we’re talking about weapons.”

I sit a few rows back from the happy huntsmen on the plane, watching them drink their bourbon and regale the flight attendants with tales of their adventures. They strike up a special rapport with one in particular and invite him along on their trip. “Hell yeah,” the flight attendant says, “I’m out of duck.” He kneels down in the aisle and tells them that men who shoot never have to worry, even should the apocalypse come. His girlfriend, however, is doomed. “‘If they close the Hershey’s store, what’re you gonna do?’” he says, then raises his voice an octave, draws out the drawl of his accent: “‘Well, I guess I’ll starve.’”

Hunting is a common enough pastime in the United States. According to the US Fish and Wildlife Service, 13.7 million Americans aged sixteen or over “took to the field” in 2011. But amongst Southern white men of means, shooting is a culture unto itself. The shooters on my flight (and this is the preferred terminology: “shooters” or “hunters” or “sportsmen” but, oddly enough, not “gunmen”) are part of what remains of the American hunting aristocracy of Teddy Roosevelt’s day. The older men know this; “free bourbon in coach!” crows the dark-haired one when the flight attendant proves himself an ally. The younger man, on the other hand, hasn’t quite learned the ropes. He has no camo on at all and he doesn’t seem to know that it’s all right for him – but probably not other people – to talk about guns on an airplane. If the younger man’s anxious to learn what’s what, he couldn’t have picked a better time to come to Dallas. This weekend – the 10th through the 12th of January – Dallas is playing host to Generations, the 2014 iteration of the Dallas Safari Club’s annual convention. If he’s got time before the TX Duck Hunt Trip, he can join the thousands of hunting enthusiasts who’ve thronged to this inflection point between the Deep South and the Wild West to learn which sort of bullets explode best inside bears, which sort of blinds keep you hidden from geese, and which sort of feed makes deer’s antlers grow so their heads look more impressive mounted on your wall. Generations also has the added draw of controversy. This year, the Dallas Safari Club plans to auction off the right to hunt one of the world’s five thousand remaining black rhinoceros. Conservation authorities in Namibia have been tasked with identifying the target animal: an old, post-breeding male who poses a danger to others. This one-of-a-kind prize is expected to fetch upwards of a quarter-million dollars, all of it earmarked for rhinoceros conservation. Needless to say, many animal-welfare advocates and wildlife conservationists are indignant at the idea that killing critically endangered rhinos is an effective way to save them. Auction organizers say they’ve received death threats. “Man up!” says one of the shooters on the plane, I’m not sure what about.

If the young man in the windbreaker on the flight from Charlotte to Dallas had ditched the TX Duck Hunt Trip and come to Generations, he might have taken advantage of the Safari Club’s array of educational seminars. These carry intriguing titles like “Safari Destination NAMIBIA!,” “Fierce Fishes of the Amazon,” “Intro To Reloading Clinic,” and “Shotgunning: The Reality of What It Really Looks Like.” I’m too compulsive a school-goer to pass these by. One of them – Tom Julian’s session on designing one’s own trophy room, which he insists is much more than “four walls and a bunch of dead critters” – is a jovial run-down of topics like wall height, humidity, “special niches,” plywood, windows, soffits, and LEDs. The other seminars I attend are much more grim, offering as they do variations on the theme that hunting is imperiled and people are out to get us. The well-known sportsman Craig Boddington – a mild-mannered ex-marine from Kansas with placid hair and a knowledgeable smile – kicks things off by reminding us that “next time an anti-hunter engages you,” we should let him know that “there’s no alternative funding.” Apparently, being accosted by “anti-hunters” is a common enough occurrence that we must be on our guard. Hikers, photographers, boaters, birdwatchers, and other unarmed varieties of nature enthusiast should be thanking hunters, Boddington says, because, without “us,” there’d be no wildlife left. (Here the facts bear him out, at least to an extent. Since 1937, excise taxes on firearms and ammunition have gone to support state wildlife agencies; the National Shooting Sports Foundation – which, in a ghastly coincidence, is headquartered in Newtown, Connecticut – estimates that these excise taxes, combined with license and permit sales and hunters’ philanthropic donations, contribute $1.6 billion to conservation annually.) Of course, the American hunting aristocracy “takes to the field” all over the world, where they’re liable to meet all sorts of people, and not just “anti-hunters” who can be waved off with statistics. When he gets to discussing how pigs are larger in Central Asia because Muslims don’t eat pork, Boddington’s PowerPoint alternates between pictures of himself, crouched beside animals he’s killed, and candids of his Pakistani and Tajik guides. “Asia is different,” Boddington says. “They’re dressed different than you and me.” He holds us in suspense for a moment, then smiles a disarming smile. “Hey, don’t worry about it – as hunters, they speak the same language.” This view is not shared by Nick Wackym, the security expert who leads a session about avoiding death at the hands of people like Boddington’s guides. Wackym insists that he wants us to go to “the far side of the world,” but that we should do it in a smart way. Midway through his presentation, he tells a long story about a comic misadventure he was privy to in Najaf, Iraq, in 2007. A “midget sniper” was proving a problem for NATO troops. They captured a man they thought was their guy only to learn from their Iraqi informant – and here Wackym grins and lapses into the accent American actors use when playing Soviets – that “is wrong midget.” It turns out that Najaf is “full of midgets” and it’s easy to mistake one for another. Wackym says that the Delta Force men who captured the “wrong midget” held him down with a broom, stuffed a hundred dollars in his pocket, and “un-arrested” him. Later, thankfully, they managed to apprehend “the right midget” and all was well with the world. This story is intended, I think, to impress on us the gravity of the security situation abroad. Wackym ends his presentation with a YouTube clip of a successful hostage rescue, despite his insistence that most kidnap and ransom cases (“K ‘n’ R-s” to those in the know) end either with the ransom being paid or in death and disaster. After a few seconds of shaky helmet-cam footage of helicopter shadows and men being shot, we see the three Italian hostages in question alive and well and smiling. Wackym says: “Here they are with a bottle of Pepsi and bad haircuts, God bless ‘em.” But, for all that, it’s Michael Sabbeth’s seminar that turns this sense of being under siege all the way up to 11. Sabbeth is a lawyer and author from Denver with the jittery eloquence of a comedian. He peppers his comments with references to “illegal thugs,” terrorists, rapists, criminals, and gang members who are in the country illegally or possess guns illegally and against whom responsible gun owners are a needed bulwark. And yet, he says, shooters are blamed for all of society’s ills, from “illegitimate births” to the public school system. “We hunters” don’t have “cultural confidence,” he says, because “we have been beaten up for so long.” Among those doing the beating is the “flash mob” that opposes the Safari Club’s impending rhino auction. Sabbeth reminds us that Safari Club members are receiving death threats on social media. And all this for the sake of an old, cantankerous, post-breeding male who’s more of a threat to his fellow rhinoceros than anything else. “It sounds like me,” Sabbeth quips, in a moment of almost-empathy. “I could go on his wall.” When pressed, he expresses doubt that the controversy will amount to much of anything. After all, anyone might “think twice about protesting ten thousand people with guns.”

Inside the Convention Center I spot the Ries family gaping up at the killing on the big screen, much as I did when I first arrived. The exhibition floor is closing, and I follow the tide of shooters back across the sky bridge to the Omni Hotel. The Omni is hosting a black-tie reception before the rhino auction begins. I tried earlier to wrangle a ticket and was laughed at. They’ve been sold out for quite a while. For the first time since I’ve been in Dallas, my plaid shirt, jeans and boots mark me as an outsider, and hotel security keeps an eye on me. I sit on an upholstered pouf and watch men in glossy tuxedoes and fancy cowboy hats escort women in pink and purple fluff past the rope line. This is the hunting aristocracy that the young man in the windbreaker on the plane could be part of if he wanted. No matter how much has changed, that hasn’t. Waiters rove around, passing out champagne. Later tonight they’ll toast Corey Knowlton and his winning bid. But the hotel security guys are giving me dark looks and talking to their lapels, so there’s no point in staying. I go down the stairs and out into the evening. The protesters are gone. The streets are quiet. Overhead, in the darkening sky, thousands of black birds thread their way down Lamar and take a sharp right at Pioneer Square. Art by Yvonne Martinez.

Joshua Williams' plays have been performed in theatres across the United States and abroad, and his fiction has appeared in The Courant and The Nassau Literary Review. In 2007, New York Magazine named him a “star of tomorrow” in a feature on young writers. He is currently working towards a PhD at the University of California, Berkeley, with a focus on the role of animals in political and social life. Follow him on Twitter @jdmwilliams.