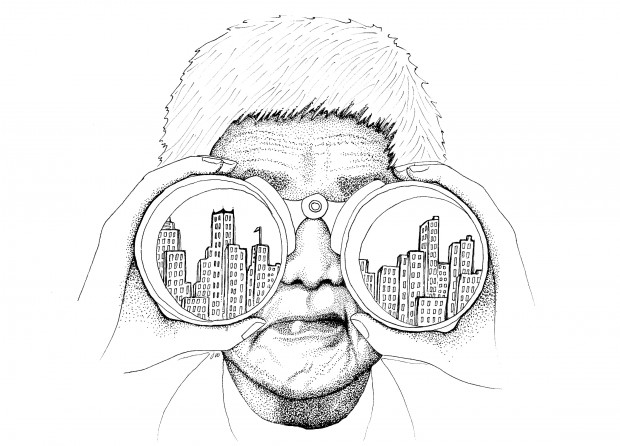 “I feel so sorry for people not living in Detroit.” Despite her city’s troubles, a 98-year-old activist sees hope.

In the opening shot of the film American Revolutionary, the activist and philosopher Grace Lee Boggs muses: “I feel so sorry for people not living in Detroit.” As you watch the (then) 95-year-old carefully wheel her walker among one of the many urban ruins of the city, you will surely wonder if she can be serious. Grace (as she is universally known) has been an activist for all her 98 years. She first worked with the legendary Caribbean activist C. L. R. James and then moved to Detroit with her partner James Lee Boggs in 1958, where she continues to live, teach and inspire others on the East Side. When Grace was in New York for the première of the documentary, she left those of us in the audience in no doubt. Leaning forward, she declared New York City to be “monstrous.” Other Detroiters in her group from the James and Grace Lee Boggs Center agreed. How awful it was to see subway riders utterly ignore some young African-American men singing Motown songs in smart suits. The activists in the audience, some of us still with residual pride from Occupy Wall Street, felt a little rebuffed. Grace’s deeper point was not (just) that the capital of capital is so soulless but that, as she put it, “you have a lot of work to do.”

The message from her work is that activism needs to begin where you are and to take on the needs of the area. It’s doing that work that makes community, rather than the “doing work for the community” that charities and NGOs like to espouse. This is what I have come to feel as the challenge posed by Detroit in general and Grace Lee Boggs in particular. How can we move “beyond making a living to make a life?” It’s a question that is resonating with people. I told this story to an elegantly-dressed urban digital designer. She told me later that she can’t stop thinking about it. Students where I teach have changed their choices after reading Grace’s work. Some refocus on Detroit and its issues. Others head into activism or teaching, leaving universities behind.

Several regulars at the Boggs Center have set aside other projects and engaged in building what architect Andrew Herscher calls “unreal estate,” a concept he and the other members of the Detroit UnReal Estate Agency define as “remarkable, distinct, characteristic or subjectively significant sites of urban culture.” Grace has stressed the need in these climate-changed times for local areas to be able to sustain themselves. In East Detroit, the urban farming movement is well-established in a city that has only one major supermarket—a Whole Foods for the incoming gentrifiers. When I mentioned Detroit’s farms to a well-known African-American academic in New York, the response was an eye-roll and the comment, “How’s that going to solve anything?” It’s a familiar question to former occupiers. It demands to know what we’re going to do about the state. In Detroit, to be fair, where the state of Michigan is bankrupting the city, it’s not clear how the state is going to solve anything. For some, the self-reliance that Grace espouses smacks of neo-liberalism. In the abstract, I can see that. On the ground, it looks different.

Last autumn, I walked around an urban farm called Feedom Freedom in East Detroit with one of its founders, Wayne Curtis. He showed me how flowers had been planted to keep insects off the kale, and how the farm was nurturing vines in a homemade greenhouse with the goal of making wine some day. There was a clay oven in the making that Myrtle Thompson told me has now begun baking bread. Both stressed that the farm had to make marketable produce in order to survive and that they were aware of the contradiction. It didn’t stop them because the real project was to “grow a community.” The farms aren’t just about food. They keep blocks from being demolished in the spaces of the city that both capital and the state have abandoned. They build networks of community by sharing food and ideas, creating social bonds rather than the unpayable municipal bonds that have brought down the city government.

Grace calls this “visionary organizing.” In her visit to New York, she stressed that this doesn’t mean religion, but it does have a spiritual sense for her. Again, I feel challenged. Throughout Occupy and beyond, there’s always been a call to involve “people of faith.” Many have been amazing, like those at Judson Church who always made space available for meetings and the always-arrestable Bishop George Packard. When it came to OWS looking to use space owned by Trinity Church at Duarte Square, however, the answer was no. Ironically, they did make it available to the incoming De Blasio administration for the now-obligatory “listening” process.

Is it possible in this hyper-religious country to think spiritually without being co-opted or worse by organized religion? At the New York panel, writer Shea Howell matter-of-factly pointed out that in many areas the African-American church is literally the last institution left standing. So any effort to create safe blocks, after-school care, or other projects has to work with the churches. Still, if we are, as Grace challenges us, “to define our humanity” after the devastations of neo-liberalism, it cannot be enough to offer materialist goals in this time of planetary biocide. Zuccotti Park offered a glimpse of what Dr. King called the “beloved community.” He also spoke of debt cancellation, a living wage, and ending war as requirements to sustain that community. Those are ideas that Occupy and Strike Debt also tried and failed to achieve. Detroit aims for the same goals. It sees them as a way to live a meaningful life, despite all the devastation, the violence, and the poverty. That’s spirit.

In the end, Grace Lee Boggs embodies what Dr. King meant by “militancy,” the willingness to persist and therefore find balance. It’s the militancy of the British Suffragettes, who consistently called their work “militant.” It knows the difference between revolt and revolution. And not in a simple way. A revolt is an uprising, often angry, but which dies away. The question is how to make a sustainable revolution, one that lasts, but does not forget how violent capitalism is towards people. Look up “militant” in Manning Marable’s biography of Malcolm X and there on the same page is Grace Lee Boggs. She almost persuaded Malcolm to move his operation to Detroit in 1965. Imagine that.

Ed. Note: Inspired by Grace? If you’re in the New York area, you can see her in person this Thursday, February 6th in conversation with Melissa Harris-Perry at NYU, or at a screening & discussion of American Revolutionary at Barnard College on Friday, February 7th.