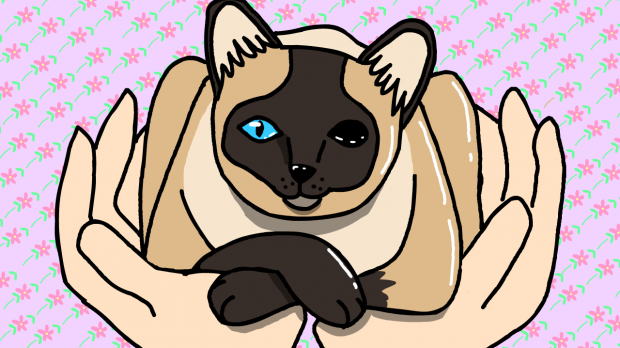 My mother once said you never have to lose if you choose your battles correctly. This was, of course, before she died and came to me in dreams.

I trained exactly two dogs in grade school—one christened Phil, the other Philip. There were three nameless cats and one Maine Coon, who was tail-less, sadly, after an elongated visit to my neighbor Phil’s house. Then after grade school, I continued on, had two naturally deceased dogs not named Phil, and one dart-prize, golden-dollar-sized goldfish that resurfaced, surviving a flushing. I once health-bound three crippled bunnies following the Solar Pool Cover Incident of 1987, and when the bunnies left, two ducks vacationed with us every summer and flapped away come winter. And then, of course, were the numerous shoe-box frogs, and a menagerie of guinea pigs for whenever you were feeling small.

But Barbara, we met in high school. She was my Siamese, my baby. I tell all of this to Solomon when I set Barbara in his lap.

We are on his porch, in the canvas woven rockers that don’t rock, and Solomon only swats her, knocks her one, and she thuds the floor. A blue eye rolls along the cement crack. My taxidermist prevented Barbara’s coat loss by spraying a small amount of shellac across the whole of her. The eyes, though, poor quality. My plasticized maternal guilt for not shelling out the cash. I gather Barbara in my arms. She is in her most casual position—right front paw folded neatly over left, head alert and left-cocked. She was never a very casual cat, I suppose. All business. All proper.

I hold her to Solomon’s chest.

Solomon points an index finger toward me, a trainer with a chair to his lion.

I’m no lion. Across the street is my shack. The lawn is spot-on plaided. I enjoy lawn work. Sometimes I enjoy it so much I just sit in the green grass, cutting individual blades with my kitchen shears, remarking how wonderful it is to hear the singular sound of each blade as it’s sliced. A small sound, but worth remarking upon.

“And don’t we think we’re overreacting.”

Solomon is adorable in his little blue cap, alert like a skin-folded watch hound in his lawn chair. He’s quite a bit older than I, a retiree and navy veteran. I won’t say I’m not youngish or several-suitored, but Solomon is special, like Paul Newman. He is Cool Hand Luke in the first frames, a wrinkled meter chopper.

I say, “I’m not leaving,” and I place Barbara on the cement, hip my hands.

Solomon still points. We are having a standoff, which is what I suppose many new couples do when embarking on the longest journey —commitment.

He takes one step backward, so I take one forward. Then he is two steps backward, and I am three forward to beat him at his own game. I don’t know how to lose. My mother once said you never have to lose if you choose your battles correctly. This was, of course, before she died and came to me in dreams. The first time she came, she said to me, “Elizabeth. Solomon is the king.” She is still with me, picking my destiny, my compass. A heavy calibrator.

Solomon is sneaky, though. I thrust Barbara toward him. He fakes right, I follow, and a moment later, he is latching the door. Sometimes I feel like we are speaking different languages.

Sometimes when my mother comes, she recites instructions like grocery lists, and I wake and scratch notes for later interpretation. I am nothing without her. The house I bought on her whim. Dyed my hair according to her color swatches. My trash bags even dictated from her tiny, lined mouth. I am astonished when cats and birds and dogs wander inches or cities from home and return faithfully and slightly fatter. Do they have guardians like my mother haunting their days and flights? Barbara was one of those compass cats. Barbara had direction.

I pick up Barbara, return to my home across the street. I stake out Solomon’s house, and when I see the lights off, I put on my coat and some kitten-heel shoes. Barbara comes with me. She is super-glued brand new, and she is looking quite genteel. I find Solomon’s living-room window. I think of our first date. He sat me on his plaid couch and showed me his collection of tiny, wooden ships inside glass bottles, and I looked at him and said, “I understand.” He kissed me, ran his hand under my blouse while I admired photos of his late wife, Pearl. She was there with us, too, I’m sure. She was displeased, and it was all very sad, but change is a necessary part of life and an unnecessary part of death. I wouldn’t expect her to understand. I had gone home that night a happy woman, and I’m sure Solomon was happy as well. We were happy. We were new.

I slip the window open and push Barbara through first, then hoist myself up and over. I am mice quiet. Now there’s only one large photo of Pearl on the mantle. She is dressed in glittered blue, looking over her left shoulder in a kind of peek-a-boo profile. I snuggle Barbara beside her. Solomon will have them both, because one can never have too many guardians.

I fidget out the window and dream my mother.

She is telling me a story. She is reminding me of something: another pet. She says I once had a cockatiel named Tico. Tico bit her right leg raw, and I presumed it was simply a strange bird nerve habit until the day I saw the very inner tendons at her joints. From then on, I sat on my knees cage-side to watch her beak plunge into her own flesh. I sang through my palms for her to stop, please stop, but I don’t speak bird, so it didn’t do any good. Each day she got deeper, slanting more and more on the zig-zag path, so I tilted my head to keep level with hers. In the night sometime, she bit too hard, and the leg fell like a dirty sock to the bottom of the cage. I imagine she fell, too, flapping directionless with her clipped wings. But it’s hard to fly and land on one leg.

My mother had cleared and cleaned the whole mess of my friend by morning. I wished I had seen her, though. Just one last time with the leg off swaying like a downtown drunk.

A. Wolfe is a writer and filmmaker in Los Angeles. Her work appears in Vice, Good, Flaunt, Golly, Unsaid, Quarterly West, The Pinch, The Collagist, Barrelhouse , and a handful of other nice places. Find her at awolfeswolfworld.wordpress.com.