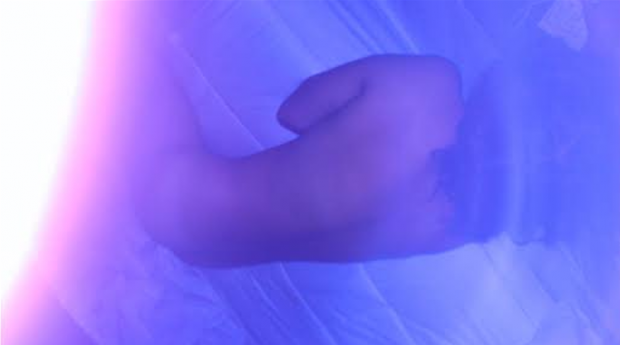 Two clocks, a song, and the unbearable blueness of being.

The only two things I’ve ever recorded were for J. The first was of me singing “Blue Room” by Chet Baker—I listen to it now and can hear how in love with J. I was, how much I believed the words, and how much I wanted that blue room. I remember that his favorite part was in the middle, and how he loved that you can hear me click the keyboard to stop the recording at the end—he said it was the accidental proof that I made the recording on my computer in my old apartment on Page Street in San Francisco. He stayed there with me the night I met him. It was Halloween, he was visiting from New York, and was dressed as Bill Nye the Science Guy in a light blue lab coat and bow tie. I knew then, and I know now that J. would never give himself to me the way I had already given myself to him after only a few months; with the exuberant abandon of running down a hill and not controlling your arms, letting them flail around you. We walked around the streets of New York when I visited him in January, our faces glowing ruddy in the cold. (Red, like the stain on my favorite white shirt from the night we fought and I cried so hard that I got a bloody nose and he wouldn’t say “I love you” even though I screamed it at him). 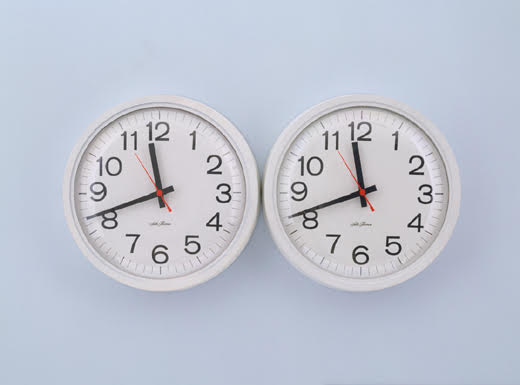 Almost exactly a year later, I recorded myself reading a poem of mine that I pretended was about Felix Gonzalez-Torres’s artwork, Perfect Lovers (1988). It was Gonzalez-Torres’s piece and his story and his love, but it became ours. Simple things can do that sometimes, I think that’s the point—to fall into it, to surrender yourself to it with an unquestioning reception of an experience in its totality. I haven’t figured out how to write about something I love without spilling my entire self into it. Perfect Lovers captured me and became a part of me, as though the Gonzalez-Torres siphoned the idea from my mind. When Salvador Dalí first saw Rose Hobart (1936)—the experimental film that Joseph Cornell assembled by cutting up and re-editing the film East of Borneo (1931), saturating it with a tanzanite glow (the not-quite blue, not-quite purple gemstone tanzanite is really a ‘blue zoisite,’ but English jewelers changed the name, worrying it would be mistaken for ‘blue suicide’)—Dalí allegedly knocked over the projector and accused Cornell of stealing the idea from his subconscious. So I overflowed into Perfect Lovers and everything mixed up into some kind of beautiful mess. I think that is where we are supposed to exist.

After becoming aware of the blue in J., I noticed it everywhere. The instructions given by Gonzalez-Torres for Perfect Lovers say that the clocks should hang on a wall painted light blue, (like the early morning sky I flew past to visit J. I’ve forgotten the blue of his eyes in early morning). Maggie Nelson found the title for her literary ode, Bluets, in the Joan Mitchell painting Les Bluets (1973), made the year Nelson was born. (In French, ‘les bluets’ means ‘the cornflowers.’ Cornflowers don’t lose their color after they’re picked. A dried cornflower will maintain its chromatic purity until it turns to dust.) Perfect Lovers was made in 1988, the year I was born. It’s hard not to read into a coincidence like that even if I don’t believe in ‘fate.’ Or at least, I don’t believe in it when it doesn’t predict what I want. Some things are blue, but other things just need to be blue for us to understand them.

Extending beyond its spectral properties, blue is equally at home in the lexicon of emotion and music: the blues. It has the singular ability of expressing the happiest, and the most tragic of states, and everything in between. Chet Baker is like that; his versions of “The Thrill is Gone” and “My Funny Valentine” can send me spiraling into a state of melancholic catatonia, no matter how sunny the sky is, while the euphonious duet of bass and Chet alternating on trumpet and vocals in “But Not For Me” has me grinning in seconds, despite its fatalist lyrics. It was Chet Baker who got me through my first New York winter. Walking the blocks from the Kingston-Throop station to my apartment could never be so bad, as long as I listened to the right songs. (Or at least so I thought, the only other meteorological blues I had ever really known were where the Pacific Ocean melts into the California sky, and you can’t tell where they meet except for the clouds, which most days look like waves anyway. We tattooed clouds on each other and there’s still sand at the bottom of my bag from the day in November when J. and I took the train to the beach and I swam in the Atlantic for the first time and it was so cold I couldn’t breathe and everything went wrong but that didn’t stop us.) Chet’s songs have a way of picking you up into the swinging notes he loosely buzzed out of polished brass—as if he could take a breath and exhale a charm so convincing you would forget all your worries and just sway with the music. He was like that in life too: a notoriously manipulative person. He conned his way out of the army and into three marriages and countless love affairs, all based on his most potent natural talent: making people feel what he wanted them to. He effortlessly wove dissonant chords and minor keys into an inescapable web of unconditional empathy and desire, then, as in all deliciously toxic relationships, he could change suddenly, rendering his listeners punch-drunk in love. All he cared about was the jazz, and making sure he could live in it, no matter what. In Bruce Weber’s documentary on Chet Baker, Let’s Get Lost (made the year I was born), an unidentified narrator tells this story: “I can’t forget the first time I ever saw him. It was in New York City a long time ago in the winter. And it was snowing a lot and I was crossing the street in front of Tiffany at 57th and 5th. He was in an old Chevy convertible with the top down. He was stopped at a red light and the snow was falling all over him. His hair was all slicked down. He was listening to Zoot Sims on the car radio…he could have cared less about the snow. Just the jazz.”

There is a tree near Tompkins and MacDonough that I sometimes walk past on my way home. In warmer weather, it blooms with plastic gossamer angels, luminescent in the mid-morning or street-lamp light. Or, the bare, black winter arms strain under the weight of the unnaturally heavy corpses of things we once wanted. Tonight was the first time I’ve seen the tree look so menacing, and it caught me off guard. Like when I forget about the inevitability of seconds, then look at a clock and realize how much time passed without me knowing. Or when I realize a person isn’t who I thought they were, and suddenly (out of the blue) I find myself betrayed and don’t know how I got so lost. Or when it’s so suffocatingly cold, and the sky lies to me but I can’t feel it because my heart is so full of someone that nothing matters except the pursuit of spinning gloriously out of control. Or the realization that while J. used to saturate every thought I had, he is fading away. To depict atmospheric perspective—the illusion of something being far away—artists typically render the background of a composition in blue hues. Our eyes read cool colors as farthest away, and warm colors as closest to us. Looking back, I should have known that J. wasn’t just three thousand miles away. Like a horizon, no matter how I tried to get closer to him he would continue receding into a blue haze. 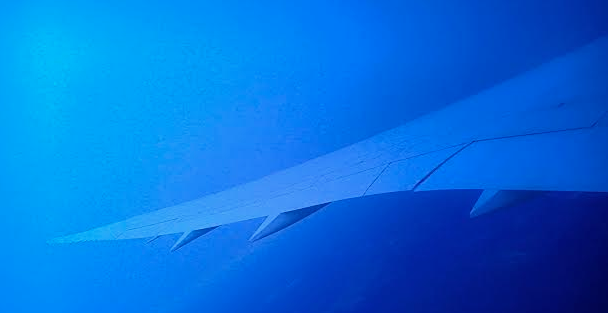 Amelia Rina is a critic, writer, freelance philosopher, confectionery wizard, aspiring physicist, and coffee enthusiast based in Brooklyn, NY. She is a regular contributor for Daily Serving and Hyperallergic.