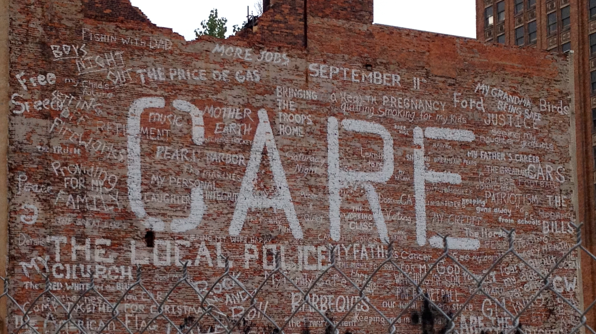 As Detroit faces bankruptcy, its people are responding with a revolution of everyday life.

There’s a new world being designed in Detroit. This time it’s got nothing to do with selling you a car. They want what you have, however little that is. Fifty years ago the Detroit Rebellion of 1967—as the so-called riots are known in the city—ushered in the first African-American mayor, a victory that lasted until this year’s elections. The victory over this long revolt is that made familiar in Vietnam: it was necessary to destroy the city in order to save it. While no one is watching, the surplus citizenry have also been rethinking what it means to live, in cities or elsewhere. It’s truly a revolution—a turning away from one way of life to another. This Detroit isn’t dead; it’s transitioning.

Nonetheless, on November 13 (or shortly thereafter), Judge Stephen Rhodes will almost certainly send the city of Detroit into bankruptcy at the behest of Kevyn Orr, the city’s Emergency Manager. Appointed by the Republican (white) state governor to run the 82% African-American and overwhelmingly Democratic city, Orr turns off the electricity when he thinks people are using too much. He panics the entire art world by musing idly about having a fire sale at the Detroit Institute of Art. Meanwhile he lives in a hotel penthouse, paid for by a clandestine political action committee. This is neo-colonial power at its most naked.

In his poorly-written slide presentation justifying the bankruptcy petition, Orr reveals how minor the purported crisis really is. The city is projecting “negative cash flows of $198.5 million in FY 2014.” However, State revenue sharing has decreased by $161 million since FY 2002, due to declining population and rewritten rules on sharing revenue. So if someone somewhere (the Michigan  legislature) merely restored the status quo ante, Detroit’s cash-flow problem would be close to solved.

Then there are 78,000 abandoned buildings, 66,000 vacant or blighted lots, and over 40,000 malfunctioning streetlights. Yet what really worries Orr is the local income tax rate—of 2.4%. His future projections of disaster rely on dramatic declines in revenue from property taxes, gambling taxes, utility taxes, general fund reimbursements, and other sources. He projects noticeable increases in health care costs for current and retired workers, inexplicably countering the present trend of decline in health care costs. Even if we were to accept his headline figure of $18 billion in projected debt, we all know such debts would be erased in a heartbeat for Citibank and their ilk. Unlike banks, American cities are apparently not too big to fail.

This is the city that was the birthplace of Ford Motors and the system of mass production known as Fordism, the city that gave us first Motown and then Eminem. It was a refuge for the Weather Underground and Patti Smith and home of Nelson Algren, whose novel A Walk on the Wild Side became the title of Lou Reed’s sub-cultural anthem. It is, in short, about as modern an American city as you can find, and like modern America, it’s been in a long decline. Even in the 1950s, over 50 households a day left the city. Its population has declined from a high of 2 million to its current 685,000. The unused space in Detroit city limits could accommodate all of San Francisco.

Detroit was always racially segregated, and, according to the 2010 Census, it remains the most segregated city in the country. African Americans worked the nastiest, most dangerous and most toxic jobs in the overly romanticized auto factories. When there were over 2.5 million African-Americans in the AFL-CIO in 1968, there was also mass absenteeism, especially on Mondays and Fridays, wildcat strikes, sabotage and repeated efforts to lower the retirement age. Why not? One-in-ten workers were disabled every year.

And so the revolutionaries in the city—the people who created the Revolutionary Union Movement and the League of Revolutionary Black Workers in the years around the Rebellion—changed course. As the best-known of their number, Grace Lee Boggs puts it in her must-read new book The Next American Revolution: “Through no fault of our own, we had been granted an opportunity to begin a new chapter in the evolution of the human race, a chapter that global warming and corporate globalization had made increasingly necessary. In its dying, Detroit could also be the birthplace of a new kind of city.”

That city would be more self-reliant, more co-operative, centered on human needs and not those of capital. The James and Grace Lee Boggs Center runs a school in one of the most deprived regions of the city. There are urban farms across the east side, some of which now work with local diners and restaurants. Boggs is a Hegelian, a former labor organizer, and civil rights activist, and she has been part of every progressive movement since the Second World War. Born in 1915, she had the wisdom to warn Occupy Wall Street in October 2011 that there was “a long way to go” and that organizers needed to be thinking about “values and not just abuses.” In short, as she asks at every meeting, “What time is it on the clock of the world?”

There are those who roll their eyes at all this and insist that the solutions must continue to come from the state. Such objections miss two key points. First, we can’t grow our way out of economic trouble, even if we were able to restore the productivity levels of yesteryear. All of these models of growth rely on increased energy use, leading to higher carbon emissions. The air in China has already reached its saturation point. Our carbon dioxide levels are over 400 parts per million for the first time since the Pliocene era, 2.5 million years ago. If you wanted a one word metonym for why that happened, “Detroit” would do. That’s the Detroit we can’t have anything to do with any more.

The second point came as a real surprise to me. Despite the fact I’m about as metropolitan as you can imagine, when I visited Detroit’s urban farms and other alternative spaces, I found myself wanting to stay, and to start again without the expectations of getting ahead and “making it,” whatever that “it” means anymore. This is the feeling I had at the best moments in Zuccotti Park and other Occupy actions. I’m a long way from actually being able to do that, but I’ll be back in Detroit and reporting on what’s happening there here. As bell hooks used to say: “Love will take you places you might not ordinarily go.” That’s the Detroit state of mind.