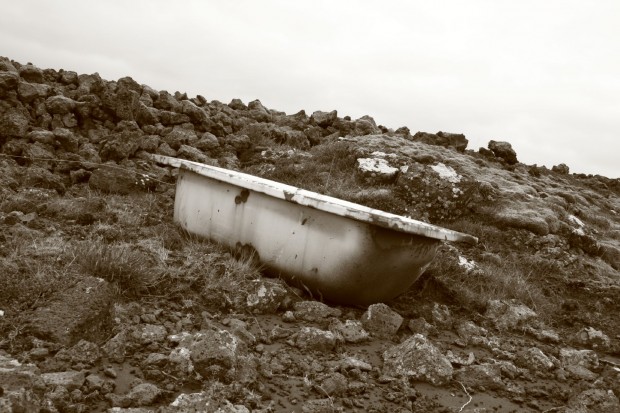 Flash Fictions for the Weary Traveler

You want the wrong things. The camera glories in the horse at full gallop through russet woods. And on its back you the bride in white, urging onwards. Hoof beat, snapped twig, threshing sounds of the wheat. Music swells and the branches of the trees catch at your veil, and you are every heroine of romance, ripping loose her stitches to get out of the picture. Into the open field. No more compulsive acquiescence. No more smiling on cue. No more men standing too close explaining how to exist, believing, if left to your own devices, you’d not quite manage such a feat. You want the wrong things. You resist, you run.

This is the town behind you: the town of old stone or skyscrapers and crisp smoke. The town of the snarky, ugly man who is most desirable. The town of the handsome man who speaks with his eyes and slow smile and pristine bulk of his masculinity. The town of kiss, pull back, laugh, kiss with the right man and no one else. The town of it’s just your fault for never knowing what you want. The town of what’s new with women this decade. The town of unacknowledged debasement. The town of fake snow and empty streets circling around each other forever. The town without any kind of scent. The town of one carefully messed up desk to show you are a busy heterosexual woman. God, it’s a big town. A capital city, though it tries not to let on. You drive the horse onwards and the sun is lowering in the sky. Red and Autumn spill everywhere, and the hills besides.

For your whole life there had been just enough irony to let you breathe – but an oxygen mask is not a good alternative to the air being real. The music says to you, keep flitting. The music says to you, this is narrative, and soon the close, and soon the laughter and a hard, ending kiss. Turf kicks up behind you. A dull thump against the twisting strain. Because you want too much, and that’s the trouble with you women. You want the wrong things. Like flesh and life, like a wet heart and nimble, unheld fingers. The only choice is to protect yourself with the things you’ve been given. The horse rears and dashes and you are alone. In a painting of a beautiful woman turned away in a landscape. You don’t want to be alone, do you? A giant sign saying, hollow cry. Is there no way out of the mind? Only as a punchline, only as a kiss.

Waiting in the town, there’s the man thumbing red roses in the long golden wheat. Smile coming slowly unhinged from his face. There’s the ex-loverboy miming the acceptable level of anger and despair and acceptance and there’s his new love beside him, his consolation prize. There’s the best friend, smiling and waving, having no thought in her head other than you, but this is straight, of course it’s a straight way of thinking. No lips touching other lips that can be soft red and hot– and maybe you don’t want love at all, maybe you want other wrong things. The pastoral strapped to your chest. The season turning and tender brittling, and for a second, a drawing down through a channel of wind and leaves. A fractured wholeness like an exploded dandelion, no strings attached. And here’s the road where you thought you would leave. Fields and scenic birds rising over it. Music rising over it. Are you leaving? Do you really want to go? And you are loved by something creeping a long blue shadow behind, and you’re running? You, running. You start to open your mouth, and in the wide open empty field, in the wide valley of all these stringencies, you gently call out – lips bluish now – the last and stale and only thing you cherish – your own name.

The Expectation of a Job Well Done

A curious state of affairs, Ausweiger thought as the men drove him through the desert towards their destination. The flat drab countryside stuttered by, dun sand marked with dark rocks. The surface of Mars it might as well have been. Ausweiger couldn’t feel the sun but he soon would. The car took a hard right, going down a barely-defined track between two dun, yes, and rocky hills. They drove for a few more minutes and Ausweiger, looking at his bald reflection in the window pane, did his best to keep his thoughts trim and careful. At last the car stopped, and the men got out. They were in a concave spot in the desert, a place that could have been either natural or unnatural. Seats had been arranged around the highest part of the bowl, and beyond the car, in the very centre, had been placed a large tin bath.

Ah, all right, okay, said Ausweiger under his breath. The men climbed the hill to their seats, and soon others were beside them, appearing over the crest, having walked out of the desert like phantoms. Ausweiger proceeded to the bath. He pushed the plug into the plughole and ran both taps at full. From the taps came the thin substance that looked almost like water with a pretty, greenish tint. It could have been marsh water, he thought, from the place where he had grown up, a land of huge ferns and tiny white houses. Reflections from the liquid danced around the sides of the bath and on Ausweiger’s face. He began to meticulously remove his clothes, starting with the shoes and working up, leaving his boxers on because even here he was shy. His little paunch, with its line of fine dark hair, was looking less protruding, he thought. Even now, he had such thoughts.

The bath was about half-way full. Ausweiger lifted one foot, his left, and hovered it over the liquid. The men viewing from the hill had their black hats low on their faces, or else sunglasses. They said nothing, did not break the silence at all, as Ausweiger lowered his foot and the acid began to froth around it, eating the flesh away.

Ausweiger lifted the leg up, now a stump with a single, stripped bone remaining. He clapped some dust from his hands.

A pause came, and then one man said, “Right Arm.” There was a quiet and general sense of agreement at this, but Ausweiger frowned. He made little theatricality of this dip, and when the handless arm came back out, he shook off the drops and turned to the men again.

“Fair,” said the man who had spoken before. In such crowds, there will be one who finds the voice of all and speaks it.

Ausweiger maneuvered himself into the bath, leaning on his good left hand. He held his breath, though even then thinking, what a thing to do. The acid rose up around him in a great hissing roiling mass. He sank into it, and lay down so that first the back of his head, then his whole head, was submerged. The sky was above him and full of an infinity that had no use for finite creatures such as Ausweiger. It was then that the bath, the sand, and his body began to fall back, and in the process of falling, begin to re-assemble from the acid-broken particles and their memory of being Ausweiger’s flesh and bones. There was a rushing, screaming wind and a flickering blue. The tin bath spun out, and Ausweiger, as he became other than the Ausweiger he had been in all his days thus far, swore he heard it clatter off in the distance, where other old spent things had gathered, collecting dust.

Helen McClory's first flash fiction collection, On the Edges of Vision, was published by Queen’s Ferry Press in August 2015 and won the Saltire First Book of the Year Award. There is a moor and a cold sea in her heart.