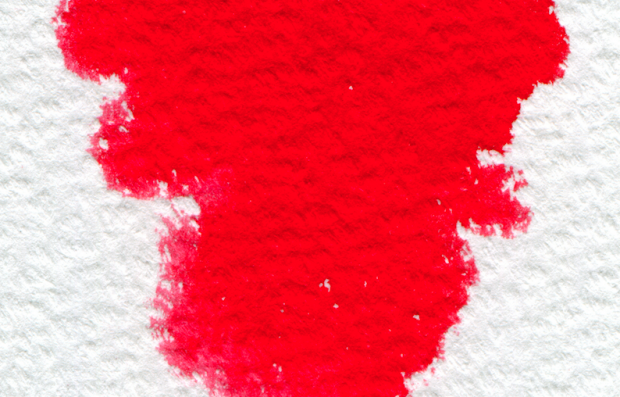 A normal day at the office, then twelve people were slaughtered. There was rage and there was grief. Some urged us to hold onto the rage, to let it swell up like a pustule of bile until it explodes all over an entire religion. Others were morbidly eager to take to the Internet and start talking about roosting chickens and about how they-don’t-personally-approve-of-murder-but. People scavenged the carnage for whatever fragments might carry a charge in their prefab ideological circuit. It was gross. It was predictable.

Since the Charlie Hebdo murders:

France’s xenophobic right wing is happy to hear this. The more France turns against its minorities, the better the National Front party does at the polls.

Islamist militants are happy to hear this. The worse things get for European Muslims, the more fertile their recruiting ground.

Charlie ruthlessly mocks the racist, authoritarian National Front. Charlie has been sued more than a dozen times by Catholic groups who don’t like the way it criticizes the Church’s dogma, crimes, and hypocrisies. Charlie took Israel to task for its disregard for the lives of Palestinian civilians. Charlie ran a column by a serious leftist economist right up until some jihadists assassinated him. Charlie uses racist imagery, giving huge hooked noses to Jews and Arabs. Charlie stands up for immigrants. Charlie publishes cartoons that offend many immigrants. Charlie punches up. Charlie punches down. Charlie is funny. Charlie is revolting. Charlie contains multitudes.

Take this Charlie Hebdo cover: A white couple is on a walk. One of them holds a leash. At the end of the leash is a crawling black woman. The racism looks self-evident.

Translate the text: “Surrogate motherhood is two parents and a slave.”

Research the background: Some wealthy European couples are paying women in poor countries to carry their babies to term.

Consider the intended message: Commercial surrogacy is a form of racist exploitation.

This information is important, indispensable in forming an opinion about the cartoon. It makes the image look quite different. It’s context.

But it’s not the only context to consider.

Maybe the use of such imagery, even for anti-racist ends, does more to reinforce racism than to subvert it. Maybe this kind of art lets a white audience enjoy a racist stereotype without feeling racist. Maybe in a country like France–a country where the deck is stacked in favor of people with one skin color and against those with another–being an equal opportunity offender doesn’t prevent the damage you do from being unequally distributed. Maybe the cartoon is just not funny.

Let’s take a breath. Let’s learn all the context we can. Let’s talk. Let’s not let the conversation die.

Liberté:
A court in the south of France has fined an Algerian man 750 euros (£637; $984) for insulting the national flag – the first penalty under a new decree.

Égalité:
A French rap star is to appear in court today (May 30) charged with offending public decency with a song in which he referred to the country as a “slut” and vowed to “piss” on national heroes Napoleon and Charles de Gaulle.

Fraternité:
Earlier this year, Amina signed up to accompany her nine-year-old daughter, Rabia, on a school trip to a museum. But when she arrived at the school, close to their house in Paris, she had an unpleasant surprise.

“The teacher told me that I was not allowed to go with the group unless I removed my headscarf,” the 35-year old says. “She said that I should respect that France is a secular society. She did not care when I said I have spent my whole life in France and I value my equality.”

Amina, a tall, assertive woman, was forced to go back home, leaving her daughter to attend the trip in tears.

Bernard “Willem” Holtrop is a cartoonist for Charlie Hebdo. The only reason he is alive is his profound dislike of editorial meetings. Faced with the outpouring of support from monarchs like Queen Elizabeth, politicians like Vladimir Putin, and religious leaders like Pope Francis, Willem grew emotional: “We vomit on these people who suddenly say they are our friends.”

The Rolling Stones wrote a song fantasizing about the sexual proclivities of women of different races.

The Sex Pistols wore swastikas and joked about the Holocaust.

Public Enemy rapped about roughing up women and gays, and one of its members suggested that “Jews are responsible for the majority of wickedness in the world.”

Do we disown them? Disavow them? Angrily delete their songs from our iPods, never to listen to them again? Or do we criticize their screw-ups, process their failings, and recognize that their bodies of work are more complicated than just the most repulsive moments?

Time to recognize the growing Christian cancer for which I must be held responsible:

Just days ago, Boko Haram massacred 2,000 Nigerians. People were shot. People were burned alive. Bodies still litter the scene. On Saturday, the group is believed to have strapped a bomb to a little girl and detonated her in a marketplace.

Where is the breathless coverage? Where are the hot takes? Who were these victims? When will we solemnly repeat their names?

You’ve probably seen this Joe Sacco cartoon, the one in which he claims the right to use racist stereotypes in his art while simultaneously questioning the wisdom of doing so. It’s smart and insightful, right up until the end. There he urges his audience to consider “what it is about Muslims in this time and place that makes them unable to laugh off a mere image.”

This aversion to laughter might surprise Mustapha Ourrad, an Algerian copy editor at Charlie Hebdo who was murdered last week, or Zineb El Rhazoui, a surviving Charlie journalist from Morocco who co-authored an irreverent comic book about the life of Muhammad. It might surprise the Arab cartoonists who drew in support of Charlie in the days following the attack.

Certainly some Muslims don’t like Charlie’s cartoons. But a monolithic Islam with a single sense of humor? That’s National Front thinking.

From Sunday’s rally in Paris: “I’m marching but I’m conscious of the confusion and hypocrisy of the situation.” 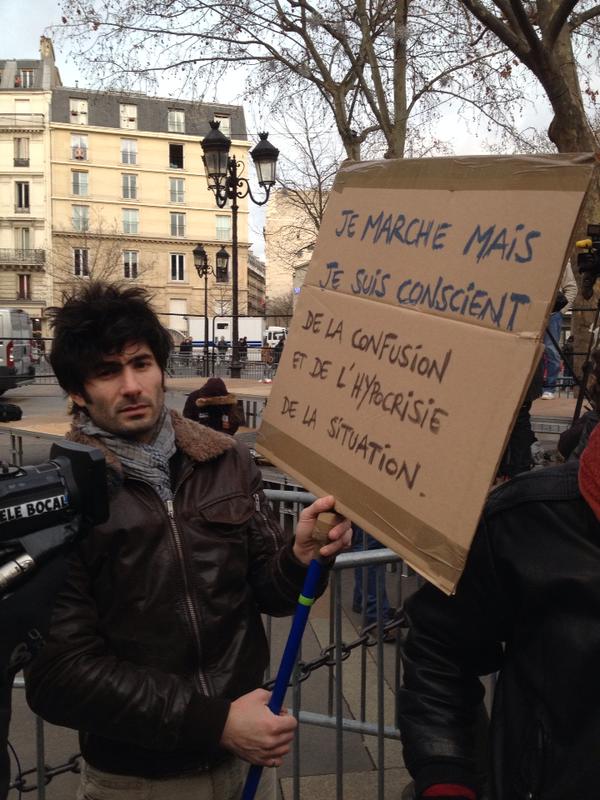 Last May, Saudi blogger Raif Badawi was sentenced to ten years in prison and 1,000 lashes. His criticism of conservative clerics got him convicted of “insulting Islam.” On Friday he received the first 50 of those lashes. A crowd gathered to watch. His hands and feet were shackled. His back was flogged. A witness says he clenched his eyes and did not cry out. America’s allies in the Saudi government will give him 50 more lashes every week for the next 19 weeks.

In 2001, Sudanese journalist Sami al-Hajj was arrested by the Pakistani army. They turned him over to the United States who used the pretense of an ever-shifting, unsubstantiated set of allegations to keep him in Guantánamo Bay for six years. We tortured him. He was released on a stretcher. He now heads Al Jazeera’s human rights and public liberties desk.

In 2010, Yemeni cartoonist Kamal Sharaf was breaking his Ramadan fast when government special forces surrounded his home. He was blindfolded, forced at gunpoint into a vehicle, and interrogated for hours by men who assured him “we can squash you with our feet.” When Sharaf was released from custody nearly two months later, he was coerced into signing a pledge to never draw caricatures of the Yemeni president again. He has not honored this pledge.

In 2011, Syrian cartoonist Ali Farzat was savagely beaten by pro-Assad goons in retaliation for his criticism of the dictator and his regime. They made a special effort to break the hands. His eloquent reply: 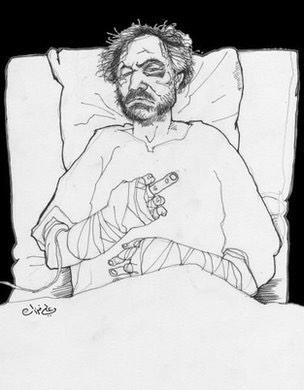 I am not Charlie Hebdo. I would not publish many of the cartoons they publish. I take less delight in offense than Charlie does. I doubt I’m as brave they are. If Blunderbuss had offices and somebody firebombed them, I don’t know that I’d have the courage to keep publishing. But I want to stand with Charlie Hebdo, just as I want to stand with France’s Muslims as they face the violence of neo-fascist thugs, and with Edward Snowden and Chelsea Manning, and with the artists and writers enduring the wrath of the same leaders who spent the weekend swapping paeans to free speech and pretending to lead a solidarity march.

This is easy to say, easy for me to type. No one is threatening to shoot me, to smash my fingers, to subject me to enhanced interrogation. I’m not sure what standing with Charlie even means, just as I’m not sure the millions who have proclaimed Je suis Charlie Hebdo know exactly what they mean. “I stand with Charlie.” “I am Charlie.” It might only mean “we are sad,” but I’ve got to hope it means something more. I hope we take it as a charge to call out and resist the monsters whether they’re storming offices in Paris or homes in Yemen, whether the people they maim and kill are white or brown or black. I’m not the first to observe that the enemy isn’t Islam and the hero isn’t the West. The enemy is authoritarianism and the heroes are from everywhere.