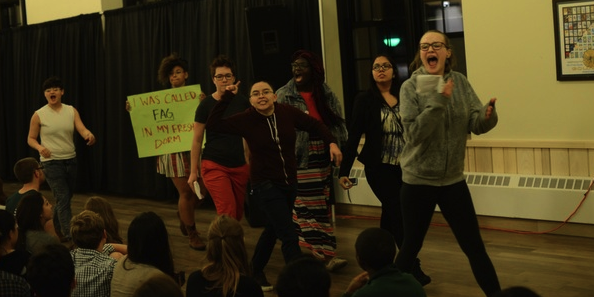 Get Rude: In Praise of Obnoxious and Annoying Activism

As student protesters up at Dartmouth College are proving, sometimes you need to get impolite to provoke an adult conversation.

As a rule of thumb, when someone dismisses a protest by insisting that it happened at an improper time & place, this person doesn’t give much of a damn about the issues driving the protest. Oh, they might insist that they give a damn, that they, in fact, give quite a large damn indeed! But if you take a look at the times & places that they think are proper and improper, you’ll find that, mysteriously, the “improper” place is always a highly public one where the issues are likely to actually garner some attention, and the “proper” one is tucked out of the view of most everyone, easy to ignore and contain, or relegated to some indefinite point in the future.

Think of Democratic or Republican national conventions, where municipalities claim to support the right to protest and then turn around and use “time, place, and manner” restrictions to the First Amendment to cordon protesters into Free Speech Zones that are isolated enough to be essentially invisible to the attendees and to the news media. Or think of liberals who, while positioning themselves as fellow travelers of Occupy Wall Street, took care to shit on the very tactics that forced the issues they ostensibly care about into the public eye to begin with (click here for a plum example straight out of Harvard Yard). Or how about the educated, urbane Betty Draper casually counseling her black maid that “maybe [the Civil Rights Movement] isn’t supposed to happen right now”?

The ways people use a mask of concerned support to undermine protest politics has been on my mind over the past few days. As you may have heard via ABC, Bloomberg Businessweek, or Think Progress, there was a kerfuffle at my alma mater on Friday night. Apparently, a group of totally obnoxious protesters shoved their way into a student-organized song & dance performance put on annually for accepted high school seniors. The protesters—Dartmouth students themselves—then, very rudely, began to denounce recent incidents of rape, homophobia, and racism on campus. They did this in full knowledge that these are just the kinds of issues that neither the administration nor the show organizers particularly want addressed in front of students whose parents may not yet have mailed in a tuition deposit. Besides, these shows are a TON of work to put on, and couldn’t they have waited for a more courteous time to mention that the social environment these kids are deciding whether or not to enter is, like, deeply pathological. After all, isn’t this why we have sparsely attended forums held by the diversity office?

Tone down the sarcasm in the previous paragraph by about half a notch, and you have what seems to be the middle of the road view up in Hanover. For example, here’s the campus newspaper’s confidently titled “Verbum Ultimum” on the incident: “While the protesters admittedly seek to address very real issues, rudely interrupting the welcome show was absolutely the wrong strategy. Their actions were unfair to the students who worked hard to create a great Dimensions show for prospective members of the Class of 2017.”

And you know what? The protesters were rude. They shoved their way into a show where they weren’t invited and they directed attention away from the hard work of their colleagues (who, it should be said, still got to put on their performance). The question the editors fail to answer is, “So what?”

Protests happen when the normal channels cease to function. Occupy Wall Street—a movement near and dear to my heart—emerged after three years of a presidency that touted itself as an agent of change failed to do much of anything to orient the economy on saner and more equitable course. The Dartmouth incident was essentially a strike against a twisted milieu where, as a friend of mine put it, “every social space [is] designed to venerate the brobag cad’s sexual priorities,” an environment that existed when I got to campus in 2004 and likely predates my arrival by roughly two-and-a-half centuries. If the administration—which fully knows that it is presiding over a profoundly fucked up situation—refuses to take action, then, yeah, it’s time to get disruptive, maybe even—I shudder to suggest—time to get impolite.

A good activist only cares about being popular inasmuch as this is useful to shoving their issues onto the docket and forging solutions. Sometimes this is best done with sweet-talking and good faith discussion, but it’s deeply naïve to think that people who benefit from a screwed up set of relations will give up their sweet deal if you just bother to reason with them. People who benefit from the current environment at Dartmouth are no more likely to be reasoned into change than Goldman Sachs is to be reasoned into backing effective financial regulation. The disgusting tenor of the backlash to the protest (which has included slurs and anonymous threats directed at the students) shows how deep the well of asshole-itude runs. When your opponents are too entrenched and powerful to be reasoned with, you had better be ready to get obnoxious. You’re gonna have to get rude even when it scandalizes folks like a campus paper’s editorial board—folks who claim to care about the same issues as you do, but only, you know, if you let the singing-dancing show start on time. Despite their affected tone of ersatz maturity, their own paper is now brimming with a real back and forth that wouldn’t have happened without the protest. Classes were cancelled today for teach-ins, a community gathering, and “a day of campus wide reflection,” and as I mentioned above, the national news media have taken note. The protesters made this happen not in spite of being rude and annoying, but because they were rude and annoying. They insisted on their issues, and in instigating an ugly backlash, revealed (again) just how nasty the campus environment can be. Still skeptical of the efficacy of rudeness? Imagine that the protesters had instead held a well-mannered dialogue in a student center conference room. Now you tell me if classes would still be on today.

These dramatic disruptions are often a necessary part of political activism, but they’re not sufficient. It’s combined outside-inside work that gets shit done; you raise hell on the outside to put heat on those with institutional power, and you work with them behind the scenes to hammer out concrete changes. You act rude to provoke the adult conversation. In the late ‘80s and early ‘90s, the AIDS advocacy group ACT UP was expert at this one-two punch.  They’d stage a militant action at St. Patrick’s Cathedral one day and meet with medical experts the next.

So to the students at Dartmouth—and to the rest of us involved in protest politics—when “allies” chastise you for choosing a too public venue for protest, or for behaving in a manner they call obnoxious or (that favorite slur of the moderate) alienating, remember that being courteous and being effective aren’t necessarily compatible. You know what’s a graver sin than being rude? Not using every tool at your disposal to fight for what’s right.

This article has been edited for clarity and to reflect the increasing national media coverage of the events at Dartmouth.

Header photo by Jacob Weiss of The Dartmouth.