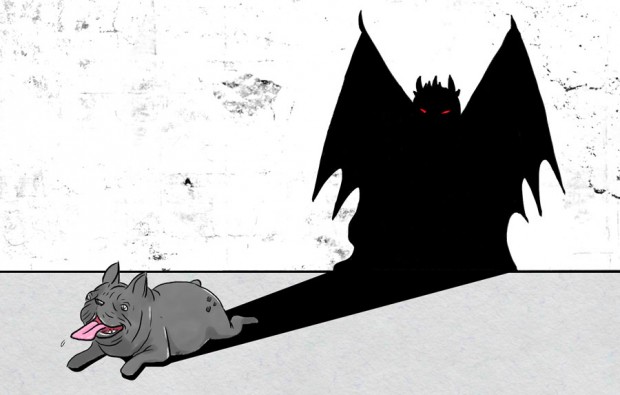 “He has definitely eaten unwary campers before. But that hasn’t happened in a while. This does not make me feel safer. Instead it makes me think how hungry he must be.”

I am nine years old. I have never seen Hugo but I know he’s there. Hugo lives in his cave dug out of the backside of the biggest hill on the grounds at day camp. He is probably a troll. He has definitely eaten unwary campers before. But that hasn’t happened for a while, not since I started coming here. This does not make me feel safer. Instead it makes me think how hungry he must be.

Jenny is tall, like a grownup almost. She has wild blonde hair and can do anything. She has read all the Choose Your Own Adventure books. Everyone is in love with her. Especially me. Jenny does not believe in Hugo. She tucks the corner of her mouth up into her cheek at the mention of his name. I pretend to disbelieve too, when I’m around her. I would probably die if she ever rolled her eyes at me.

“You kids stay out of there,” Ellen says whenever we talk about the cave. She sounds distracted whenever she talks to us, like she is re-ordering a mental list of all the places she’d rather be than here.

Some of the older kids aren’t afraid of Hugo. They barrel into his cave, feeding off each other’s unspoken dares, kicking their way through the debris and bones.

“There’s nothing here,” they yell out. “Just a bunch of shitty desks.” But Daniel Foley went in there once and came out with a stick jammed deep into his eyeball. You could hear his howling through the solid oak doors of the infirmary and halfway down this hill.

Sleepover night for my group. The now-empty camp is suddenly full of possibility and dread, a wide open expanse too big for just the twenty of us. During the day, our sheer numbers keep Hugo contained. But at night the camp is his. At night it would be a trivial thing to disappear in the woods of birch and red oak, to take a wrong turn down a quiet path that leads only to a grisly end. We must stick together, or be lost.

After dinner Jenny and I play box hockey until after sunset. My rules are onesies, because my game is defense. Whenever Jenny wins she calls a scramble, which really means no rules, just hacking away at the plywood puck. Thwack-thwack-thwack. She is athletic, as strong as any of the boys in our group, and often overpowers me in scrambles. We drop the puck over and over. I wish time would stop.

But she looks up and around. “Where is everyone?”

She’s right. We’re alone in the suddenly ominous dusk, just her and me and Hugo. We do not see him but he is there, watching, waiting, hungry. Her face changes as we start looking for our friends, her natural confidence dissipating like bubbles from ginger ale. I grip my box hockey stick like a club. It’s heavy and comforting. She digs her fingers into my arm. She will never admit her fear. She will never admit that Hugo is real, even as he devours us whole, his breath tangy and rotten, his fangs sharp and inevitable. For the first time, I feel like a man, even though I’m terrified.

We find them twenty minutes later, in the cluster of pastel domes where the little kids do gymnastics. Simone is threading the projector when we walk in—ohhhhhh right, the movie. We’d forgotten.

“Those aren’t allowed in here,” Simone says. I look down. I still have the stick. Everyone is looking at us, waiting, knowing. Jenny drops my arm, leaving red divots where her fingers were, and sits down with the girls on the far side of the dome.

The movie is Nosferatu, which is supposed to be scary. But it isn’t, not really.
*

Spencer Fleury lives in Florida and makes no apologies for that. His work has previously appeared in Word Riot, Squalorly and Earth Island Journal. He is currently working on his still-untitled debut novel.