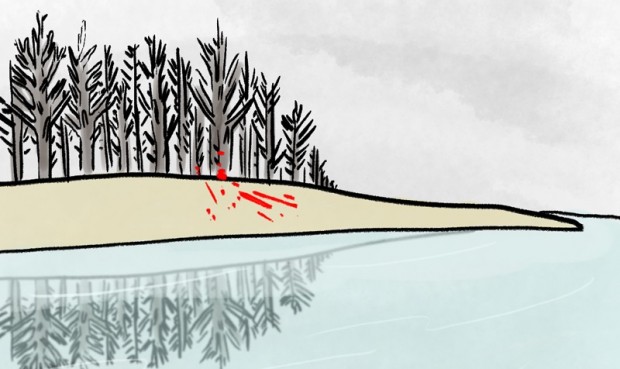 Neither man screams. The only sound is the sound of a body breaking. These two have been playing this game for centuries.

On the edge of the woods, the land is marshy. Early spring and the grasses are dead, straw yellow after months of cold. The last snow has melted away, but at night a skin of ice, thin as a whisper, still grows over everything, and morning footsteps sound cruel breaking through. Now it is no longer morning. Hard to tell the time of day. Clouds without form, an even and unending gray—the color of water just waiting to fall—fill the sky. The river, a listless current looking for lower ground woven in among the rushes and cattails, replies to the sky with a mirrored gloom. It seems the sun will never shine again.

Out of the pines: a man running with desperate speed. He can’t have known what he would find. The wide marshland and the river are his ruin. Impossible to cross. He tries to hide himself, hunkered, boots sunk in the clammy silt of the bank, a feeble screen of stalks worrying in the wind before him. He bends his head. Is this a prayer? He has no wish to fight and he has no wish to die.

He can hear, coming nearer, the certain footfalls of his pursuer. Both men are dressed in colors to match the day, dreary as a lament. The fabrics they wear and their faces and their souls are textured like the land. They belong to this world, are as intrinsic to it as the rutted bark of the pines, as the naked, languid water.

The scene unfolds without their wishing it. One man hunts the other through the woods to the riverbank. The hidden one is found. His hands above his head are no defense. Blow follows blow, the implement a thick stick, some pine bough hewn for service. There is no mercy.

Too far away to see; still, there must be blood: the only brightness in that dim world, that world of ineludible gray. Bright as hope.

Neither man screams. The only sound is the sound of a body breaking. These two have been playing this game for centuries. One is always in hot pursuit. One is always falling to his knees. It is far worse to be the murderer.

More of Kate Brittain's writing can be found at Volume 1 Brooklyn, The Paris Review Daily and Tin House's blog, The Open Bar.