n+1’s new book surveys the literary landscapes of NYC and MFA, but what of the independent magazine culture that exists beyond their borders?

After finishing MFA vs. NYC: The Two Cultures of American Fiction, a new book of essays from n+1 and Faber & Faber, the early warning symptoms of a panic attack forced me to put the book down and, with the help of a stiff drink and a hot bath, collect myself. Deep breaths, I muttered. You can do this. You can find a way to make a life as a writer. Of course—and this is one of the core takeaways of the book—everyone else who writes is telling themselves the same thing, and there aren’t nearly enough books being pumped out by New York’s Big Five publishing houses or tenure track jobs at the country’s creative writing MFA programs for everyone to make it. Whether you’re writing in Park Slope or Iowa City, this Chad Harbach-edited collection is eager to remind you that you’re probably screwed. 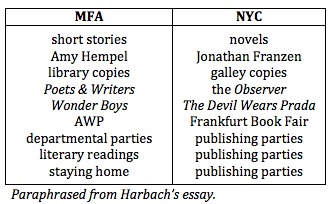 MFA vs. NYC takes its title from a Harbach’s book-opening essay, originally published in the Fall 2010 issue of n+1 and available online here. In it, he argues that the main bifurcation in American literary culture isn’t, as it’s often framed, one of education, but one of economics. “It’s time to do away with this distinction between the MFAs and the non-MFAs, the unfree and the free, the caged and the wild,” he writes. “Once we do, perhaps we can venture a new, less normative distinction, based not on the writer’s educational background but on the system within which she earns (or aspires to earn) her living: MFA or NYC.” The cultures that have grown up around these two epicenters of writerly livelihood are different. MFA culture tends to look a lot like the safe, quiet, unambitious culture of academia, and the culture of New York publishing “increasingly resembles the Hollywood world of blockbuster-or-bust.” The former scene encourages its professors to place competent short stories in the kind of reputable journals that will impress a tenure committee, and the latter scene elevates and discards writers based on the will of the market (and on agents’ and publishers’ perceptions thereof). The pressures, perks, and risks of each culture are different, and MFA vs. NYC provides firsthand accounts from both sides of the divide.

Given the states of academia and the publishing industry, I guess it shouldn’t be a surprise that the assessments here tend toward the bleak. Emily Gould (NYC) made $7,000 in 2011, but still felt obliged to pick up the coffee tab to impress the admiring young would-be writers who wanted to know how she’d managed to be so “successful.” Eric Bennett (MFA) left his stint at the Iowa Writers’ Workshop wondering if he despised the place because of its distinctly Cold War literary ideology or if the Workshop simply didn’t “love [him] enough.” UK literary agents like Jim Rutman (NYC) forthrightly titles his essay “The Disappointment Business.” David Foster Wallace (MFA and NYC?) thinks writing programs are an okay way to provide established writers with a paycheck and young writers with a community, but worries that their ultimate consequence is “a veritable storm of boredom: envision if you dare a careful, accomplished national literature, mistake-free, seamless as fine linoleum; fiction preoccupied with norm as value instead of value’s servant; fiction by academics who were taught by academics and teach aspiring academics; novel after critique-resistant novel about tenure-angst, coed-lust, cafeteria-schmerz.” Shit.

To be fair, not every essay is totally despairing. Alexander Chee calls his time at Iowa “one of the best things I ever did for my writing life,” and George Saunders assures us, “If someone wants to go to a CW [creative writing] program, then goes to a CW program and it sucks, she probably won’t die from it.” But overall, MFA vs. NYC is a field guide to a terrain that’s practically post-apocalyptic. Keith Gessen spends a pair of essays cataloging the various hustles he’s used to make ends meet. Diana Wagman struggles futilely to convince the faculty of a MFA program she’s “cool” enough for a long-term position. Eli S. Evans gives us “A Partial List of the Books I’ve Written.” The list is long, and none of these books has been published.

While, in retrospect, I might have rather not picked up this book just a couple weeks after sending my first novel out to prospective literary agents, clear-eyed appraisals are generally more useful than full-hearted ones. A writer’s path to solvency is a treacherous one. I get it. It was never much of a secret that the life an aspiring literary fiction writer is a tough one. Reading essay after essay of writers testifying with sobering specificity about how and why it’s been tough for them, and of industry professionals attesting again and again to the brutality and semi-randomness of success their industry, is, I guess, a good character building exercise. “Steel yourself, young writer. There is trouble ahead.” I survived your purgatory, n+1, and with the help of that stiff drink and hot bath, I’m at least partially revived. Now what?

Of this, of how to actually make a go of a writing life or, grander still, of how to bend the institutions that dominate either prong of our two literary cultures in more satisfying directions or to circumvent them all together, MFA vs. NYC has little to say. It’s quite possible that this is because there is little to say. Writing advice tends to either be so general as to be meaningless or so specific to a given writer’s personal tics and life experience as to be useless, and an ocean of think pieces on the State of Publishing and the State of the Academy haven’t exactly solved the problems of either.

Maybe n+1’s best answer to these problems isn’t to be found in the pages of its latest book, but in the fact that n+1 continues to exist. Outside of both official academia and the machine of corporate publishing, the small journal and its various ventures into book publishing, podcasting, and broadsiding have managed to stay afloat for almost a decade, giving venue to a literary conversation that is not quite MFA (though many of its writers are graduates) and not quite NYC (despite the location of its offices). The realm inhabited by n+1—and other youngish, independent literary/cultural/political publications, this one included—is decentralized, ad hoc, run on a shoestring. Radical politics bubble to the surface in n+1, the New Inquiry, Jacobin, or Blunderbuss in a way that they don’t in the university workshops of Irvine and Wilmington, or at the Random House offices in Midtown Manhattan. This scene is centered in New York, but it’s not the faux-glamorous rat race that Harbach means when he says “NYC.” It’s a culture of LeftForum panels, readings at KGB Bar, Twitter fights, and occupied parks. It draws ideas from academia but lives largely outside it.  It imagines—and finds—an engaged readership for something other than the quiet craftsmanship of the MFA canon or the middlebrow liberal sensibilities of mainstream literary publishing. It prizes the DIY over appeasing traditional gatekeepers. What is stirring is a Third Culture, one that has grown in the shadow of the other two but belongs to neither. Those who edit and write for these publications sometimes teach creative writing—see n+1 editor Gessen’s account in “Money (2013)”—and occasionally they get blockbuster paydays from big publishing houses—see Harbach’s $650,000 advance for The Art of Fielding. But the ability of individuals to straddle boundaries doesn’t mean that these different cultures don’t exist. Harbach himself writes, “The fact that it’s possible to travel without a passport, or to be granted dual citizenship, makes [literary cultures] no less distinct.”

As the book’s essays relentlessly remind you, the hope of making a living in the worlds of MFA or NYC is, for the vast majority of writers, more aspirational than realistic. What makes the Third Culture different is that it doesn’t even pretend that anybody can support themselves off its largesse. I lose money on Blunderbuss. Keith Gessen says he only breaks even on n+1. On a good day, an article placed in one of these publications might earn you $150. More often, writers, editors, and artists labor for free. There is no pretense of this being a viable way to earn a living. People rely on side gigs, day jobs, or family support to get buy, and as we age, consider starting families, and tire of too many roommates and long walks to the subway, many of us likely to drift away, like would-be rockers quitting their bands when they hit 30. But drift away to what? Even if we all wanted them—and probably on some level, most of us do—there aren’t enough endowed chairs at Iowa to hold all of our asses, and not enough three-book deals floating around Manhattan to buy all of us brownstones. If the institutions won’t make room for us, what are to do except build a network of counter-institutions?