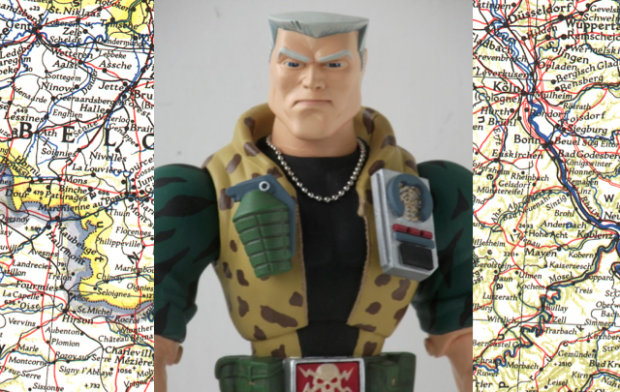 Last year, my mother celebrated her retirement from the US Navy after 37 years of service as a civilian employee of FMSO, the Fleet Material Support Office. Therefore: a substantial portion of my childhood and undergraduate education were made possible by the military industrial complex.

In the film Small Soldiers, toys wage mini-war on the suburbs. Arms dealer-cum-toy company GloboTech engineers the Commando Elite, a line of action figures with a chip ‘enhancing’ their preexisting mentality: “There will be no mercy.” Commando leader Chip Hazard stands before the flag, a visual nod to Patton: “No sap ever won a war by dying for his country, he won it by being all that he can be. Damn the torpedoes, or give me death!” The mangled military cliches are played for laughs, but how many in the regulation-sized military speak like this? How many use these words with ironic detachment and how many as ‘truth?’

As part of the centennial anniversary of World War I, Mini-Europe devotes a section to mini-battlefields, mini-trenches. A ‘small soldier’ in the mud awaits his fate.

In 2000, middle-aged alcoholic Mark Hogancamp mentioned his love of crossdressing to five teenage boys, who drug him out of the bar, beat him, and left him for dead. Hogancamp awoke, memory gone. Relearn to walk. Relearn to think. Short on visitors, he speaks to dolls, constructing a village in his yard and populating it with toy soldiers and Barbies. “This is me,” he says, holding a handsome soldier with five o’clock shadow and a cigarette. Mini-money in his mini-briefcase. Removable clip in his mini-gun. “Doesn’t everybody wish they had a double who could do things they could never do?”

Many critics dismissed Small Soldiers as a two-hour toy commercial, the same year they hailed World War II prestige drama, Saving Private Ryan. But a view through the Commando Elite lens reframes Tom Hanks and his noble comrades as cogs with chips in their heads ‘enhancing’ their backwards moral code. According to film critic Jonathan Rosenbaum, Private Ryan’s claims for ‘authenticity’ and ‘realistic’ violence make it “one more link in an endless chain of generic macho self-deceptions…with patriotic and patriarchal slop ladled on top of it.” A three-hour war commercial.

How many men in America tonight in basements watching three-hour war commercials on flat screens?

A few days after Mini-Europe, I visit the Royal Museum of the Army and of Military History in Brussels. Rows of vitrines of mannequins in uniform. Sixty-six Belgian flags in one room. Halos of shotguns. Swords encircling armor. Two massive air hangers worth of war leftovers, armored vehicles, tanks, planes:

My military mother didn’t allow toy guns in her house. I had to go to the neighbors’ house for that.

If we can’t end war, can we make it smaller? Could we get rid of the all this stuff?

May 1950: Robert Schuman proposed the first step towards the EU, a unified Europe, with a plan to integrate France and Germany’s coal and steel industries, a way to “make war not only unthinkable, but materially impossible.”

Hogancamp’s dolls have a one-to-one correspondence with people in his hometown, Kingston, NY. One doll is his mother. One, his neighbor, Colleen. “Who does each face remind me of?” An ongoing plot in a parallel reality. In one narrative, five enemy troops kidnap mini-Hogancamp. They torture him, scar his plastic face, but before they can finish him, three Barbies with pistols break in and swiftly dispose of his captors. Hogancamp: “I don’t want to get hurt ever again.”

Is Mini-Europe someone else’s dramatized re-imagining of the world? If so, whose?

Mini-Germany: a toy construction vehicle knocks down a portion of the Mini-Berlin Wall, reenacting its 1989 demolition. Before I look away, the wall sprung back into place. The vehicle knocks it down again, it springs up, knocks it down, springs up, up, down, up, down, up, communism, capitalism, back, forth, back. The central struggle of the twentieth century fought daily in 30-second intervals by a rectangle of graffitied plastic and a toy back hoe with no driver.

Above the Mini-Berlin Wall, under plexiglass encircled by fake barbed wire, is some rubble labelled “Real Piece of the Berlin Wall.”