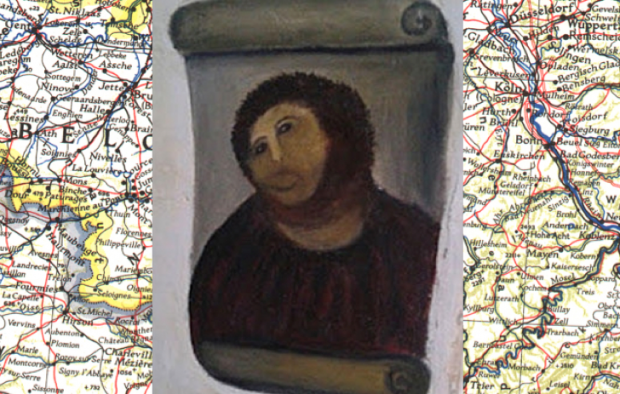 When you set out to prune an artificial flower and end up giving a fuzzy mane to Jesus Christ.

The Mini-Leaning Tower of Pisa 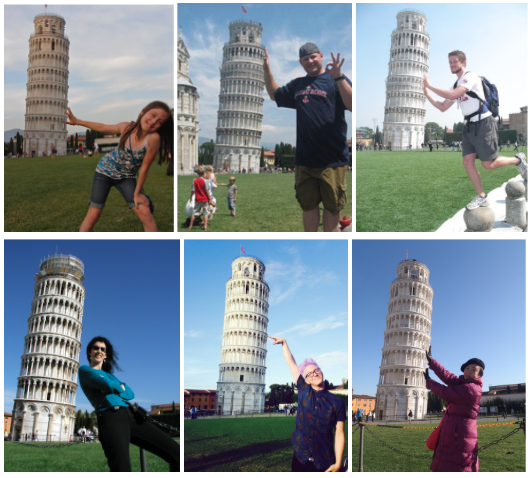 I concern myself too much with being clever and original.

Each pose with the Leaning Tower a visual knock-knock joke, the subject’s well-meaning bid for cleverness immediately undermined by the sheer volume of cleverness preceding it.

According to the avant-garde, first is best. Copyright agrees. Each foot on the moon a cover of Neil Armstrong.

So who leaned first? Who is The Leaning Auteur?

Elaine Sturtevant never painted an ‘original’ painting. An entire career, repainting the work of artists such as Roy Lichtenstein and Jasper Johns before their international fame, her work approximate but never the same, never copy and paste. Find posters that look like her paintings in the MoMA gift shop or via Art dot Com under the name Andy Warhol. 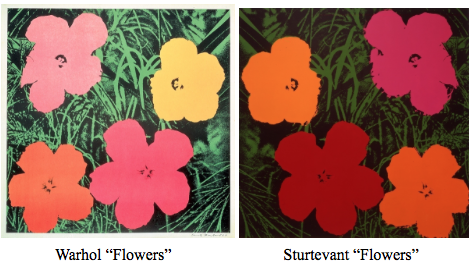 That there’s no original Leaning Tower photo feels comforting. Purposefully or not, we arrive at the same place. When Bill Withers sings: Just call on me, brother, when you need a hand, the chorus replies: We all need somebody to lean on. Look long enough and the Tower recedes, leaving a portrait, body, canvas of subjectivity. Some lean in repose, others save it from crumbling. Patrons at Mini-Europe engage in the same act, though the comment on depth of field weakens. 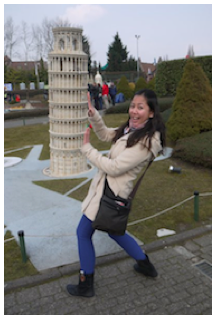 “It’s important not to come across as the ugly American,” says Lisa Grotts, author of A Traveler’s Passport to Etiquette. When abroad, don’t embarrass your country by being yourself. Hide your identity. Immediately, seamlessly, blend in.

My second grade teacher told me I had to change the way I held my pen. “But you gave me an A in handwriting!” I’d written an A just like my teacher’s A, but with my hand inappropriately leaning on the tabletop. Identical product, wrong process. The teacher sent a letter home to my parents. I still refused. 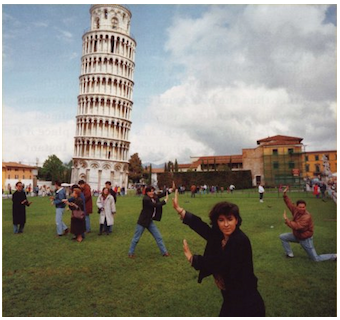 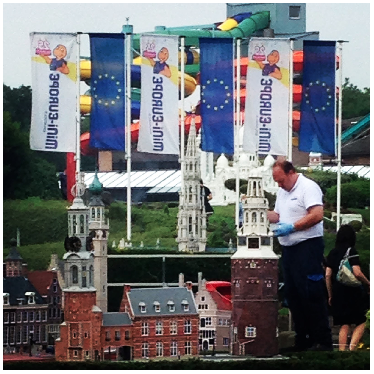 Mini-Europe is maintained by giants. One vacuums the Mini-Neris River, guzzling mini-riverbed debris through a hose. One wears a polo and rubber gloves and looms above a mini-clock tower with a paint brush. King Kong as pool boy. Godzilla mowing the lawn. They touch up the architecture and citizenry, staving off beauty’s enemies, time and weather.

At a party, a friend who works with ancient art told me that museums stop caring for a work if they find out it’s ‘fake.’ The real Matisse may live. Almost Matisse must die. “So you euthanize fakes?” I asked. “No, we just let them go.”

Mini-Europe awards the fake with eternal life. If fake’s all you got, at least keep it nice.

Wallace Stevens rarely left Hartford and never traveled to Europe, but his words may still apply: “Death is the mother of beauty. Only the perishable can be beautiful, which is why we are unmoved by artificial flowers.” The goal of restoration: to resist temporality. To reupholster age with a plastic rose.

January 2010: A patron at the Metropolitan Museum of Art trips into a Picasso. Though the patron walks away unscathed, the tumble creates a 5.9in rip in the painting’s lower right corner. For the next six weeks, the work recuperates, supine beneath the weight of silk sand pouches.

August 2012: In Borja, Spain, a fresco of Jesus in pre-crucifixion pose, is dying. Time has erased his ear, his chin, his lower torso. Eighty-year-old Cecilia Giménez, parishioner at the fresco’s church, volunteers to stop the slow fade, and her restoration makes international news.

In Giménez’s version, Christ’s crown of thorns becomes more fuzzy mane with chin strap. Many journalists joke about changing the title from “Behold the Man” to “Behold the Monkey.” Giménez intended to prune an artificial flower, and accidentally grew a real one. She aimed for timelessness and missed. 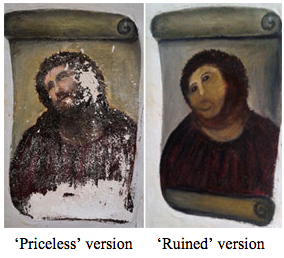 The painting discussed on The Today Show: Matt Lauer: “This is not good.” Samantha Guthrie: “I can’t even look at it. Is nothing sacred? Apparently not.” Why shame this woman? Newscasters, Giménez, and I all want the same things: to believe in the fakeness of the eternal, that expertly applied anti-wrinkle cream could sustain us, that institutionally sanctioned art gets to binge-drink from the fountain of youth. But come on.

At Mini-Europe, the giants go to lunch, leaving a country partially dismantled, a mini-bridge half-finished, massive power drills and electric saws as big as buildings dwarf the citizens of Mini-Luxembourg.

At Grand Place, the central square of Brussels, I sat amongst fellow tourists on the open brick. We grazed on sandwiches, pointed and posed by lavish archways. At the plaza’s far end, workers restored the aging facades of guildhalls, standing on multiple floors of scaffolding, all concealed by a giant scrim printed with a replica of the buildings it covers. A monument veiled in a photo of itself.  An eye patch with an eye drawn on it. A broken leg wrapped in a photo of a leg.

Did Giménez ‘ruin’ Jesus with her ‘amateurism?’ One could argue Elías García Martínez’s 19th century original wasn’t that ‘good’ to begin with, just as one could argue Jesus’s attempt to ‘restore’ the world from original sin also falls into the category of ‘botch-job.’

In East Side Story 2006-8, Croatian artist Igor Grubic projects two simultaneous images. Each takes place in the same urban center, a few years apart. On the left, television footage of neo-Nazis attacking and overrunning peaceful gay pride events. Chases, slurs, beatings. On the right, Grubic attempts to write over these atrocities, so thickly as to destroy what came before. Grubic and his colleagues dance, incorporating gestures from the events  into their own movement. They swirl in street clothes in the same public squares, aggression answered with grace, a layer of small and temporary beauty atop a screaming past. 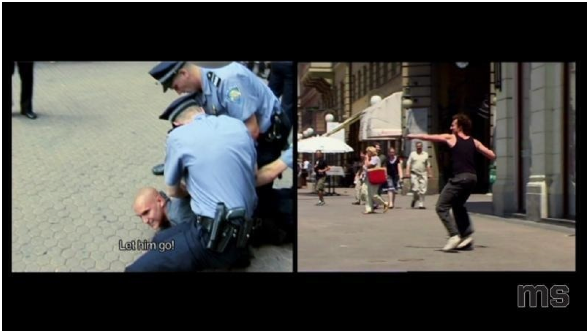