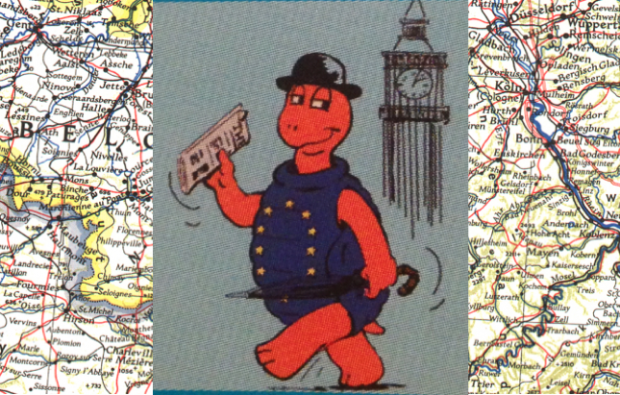 It’s turtles all the way down.

We’re all turtles in different clothes.

Upon entering Mini-Europe, a turtle embraced me. The turtle itself was mute, but its companion, a young man with a camera, asked on its behalf, first in French, then in English, if I’d please pose with the turtle. An orange ambassador welcoming me into the “we” of Europe. Handshake. Sidehug. 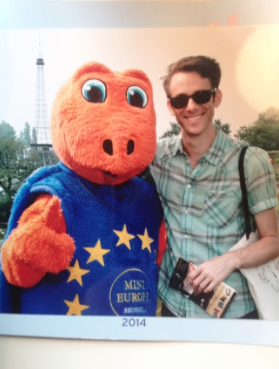 A mascot “represents” a group: a school, a sports team, a society, but how does one represent the entirety of a continent? Best solution so far: a person in a turtle costume.

My brief affair de cœur with sport and mascots peaked somewhere between the ages of 11 and 14.  Many settle for the closest geographically. I preferred to shop around. Which ‘we’ was most me?

Over two thousand teams in the US use Native Americans as their mascots, their representatives, the Washington Redskins being the most infamous, originally named by a former coach, William Dietz, who claimed to be Native American, but lied about this heritage to avoid a military draft. His parents were both German American.

Interviewer: “What is a Redskin?” Redskins owner Dan Snyder: “A Redskin is a football player. A Redskin is our fans.” His reason for not changing the mascot: “Tradition.” 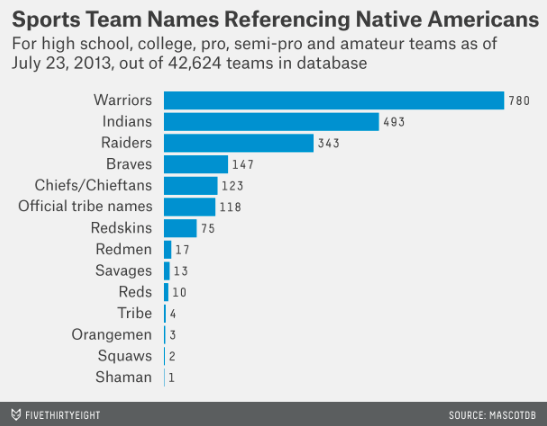 The turtle is the undisputed star of the Mini-Europe booklet. Along with photographs, fun facts, and descriptions of the reduced-size monuments, the booklet boasts color illustrations of the turtle sporting various stereotypical nationalistic props and outfits, one for each every country.

My Catholic high school’s mascot: the Crusaders. One could argue all ‘our’ away games at neighboring public high schools were watered-down reenactments of the Middle Ages, boys in gold helmets called upon to reenact the slaughter, securing passage to heaven by scoring more points.

I watched clips of “The 20 Funniest Mascot Fights Ever,” a countdown of costumed characters brawling mid-court, mid-field, tackling, punching, tossing each other over railings.

Due to the increasing volume of bad press, Snyder hired a crisis management firm to build the website ‘Redskin Facts,’ with testimonials from Native Americans saying they don’t mind. Snyder: “We live in the present, and from that standpoint what we really feel and understand is the name [Redskin] represents pride. It represents honor. It represents respect.”

My first year of undergrad, what represented me changed. The previous mascot, ‘Flying Dutchmen,’ a nod to the school’s Dutch immigrant founders, was vetoed in favor of ‘Pride.’ The Hofstra Pride. The school intended the word to refer to a pride “of lions.” When lions gather en masse, they’re referred to as a pride. Yet, the word also happens to be the abstract noun most associated with queer rights, with the shedding of the need to hide one’s sexuality. Pride could also be the equivalent of calling the team “School Spirit,” or “The Feeling Felt by the People in the Stands.”  If one ignored the doofy lions, the mascot  wasn’t an animal symbolizing pride, but pride itself.

When I returned from Mini-Europe and showed Ben my photo with the mascot, he almost spit  beer on it. He laughed and pointed at me with his cigarette then took the photo in his hand, his brow narrow in study and wondered aloud, “Why a turtle?”

The origin of the phrase “turtles all the way down” stems from a 19th century science lecture, maybe given by William James, possibly Bertrand Russell, or sometimes attributed to simply ‘a scientist.’ I’ll paraphrase: The scientist speaks at length about the spherical world and its relation to the cosmos, etc, when an audience member, often depicted as a ‘little old lady,’ stands and interrupts: ‘But we all know the mini-world is flat and rests on the back of a giant turtle.’ The unfazed scientist replies, ‘Then what does the turtle stand on?’ ‘Oh, you think you’re so clever, don’t you?’ says the woman. ‘It’s turtles all the way down!’