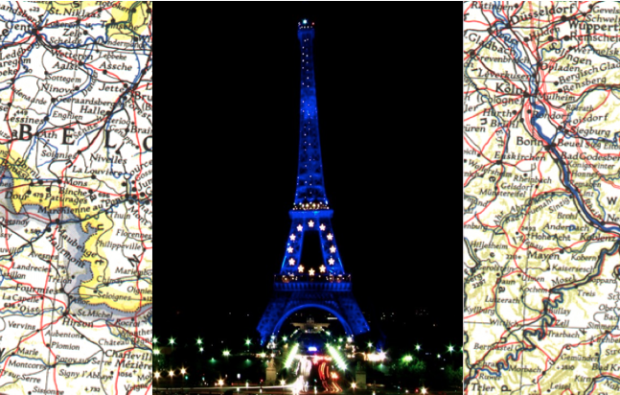 Sun rises over Mini-Acropolis. Sun rises through crannies of Mini-Eiffel Tower. Onto glimmering thighs of the Mini-Roman Army. 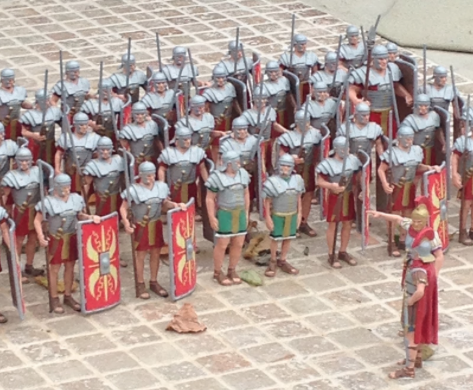 What if Mini-Europe had its own sun, a 1:25 scale disco globe dangling above regular-sized Belgium? Somehow the actual sun protrudes, brightens, crossing through regular-sized shrubs onto a copy of a continent. 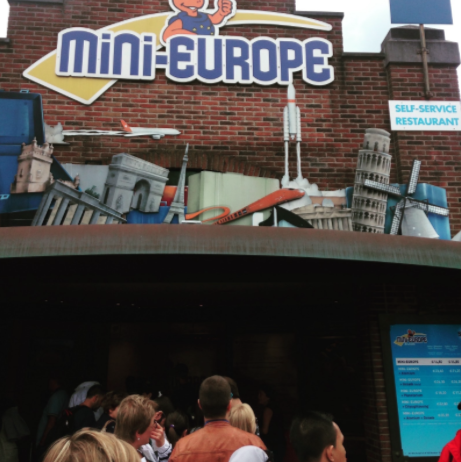 Outside, regular-sized people queue. They check their phones. They say to their kids, “That’s enough!,” “Get back here!,” and believe their kids will love Mini-Europe because it’s small like them. No one understands what the small love.

Inside, there is stillness. Sun rises on Mini-Plaza Mayor. Onto 1-inch Don Quixote tilting at 4-inch windmills. Onto mini-Hungarian sunbathers who lift their right knees in unison to greet the morning.

What will my Mini-European counterparts be like? Will they be a mirror to my own experience such that I’ll know myself fully upon beholding their mini-eyes? Though the Europe is small, will the revelation be extra-large?

Voiceover from the 1957 film The Incredible Shrinking Man: “I just saw the impossible happen before my astounded eyes. I saw a man grow smaller and smaller day by day. I saw the loneliest and most frightened creature on earth living a nightmare in a world of giants.” A person in a blue Mini-Europe polo shirt unchains a gate. Credit cards spring from purses. The man next to me grunts, and tilts back his head. “Finally!” 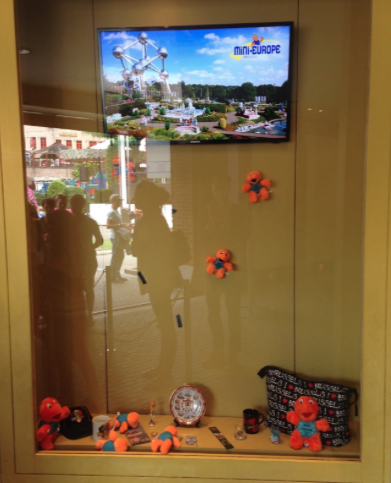 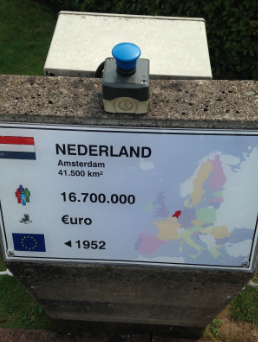 Every country identified with a plaque, and above every plaque, a blue button. Press the button to hear a 20-second clip of that country’s national anthem.

Arrive at Mini-Europe with 27 friends. Position one at each blue button. Press play. The cacophony of patriotism. 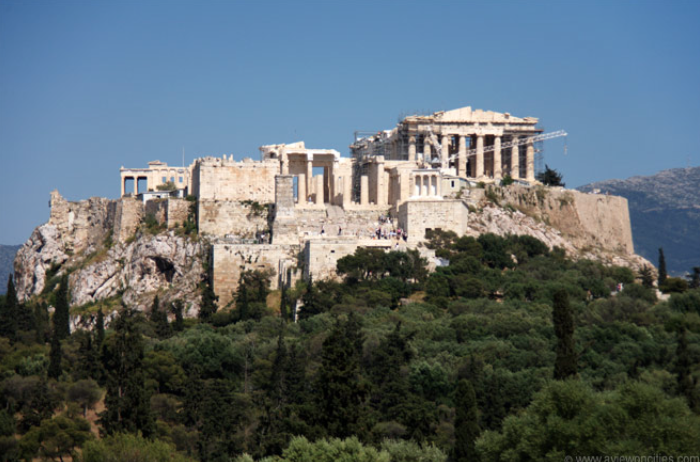 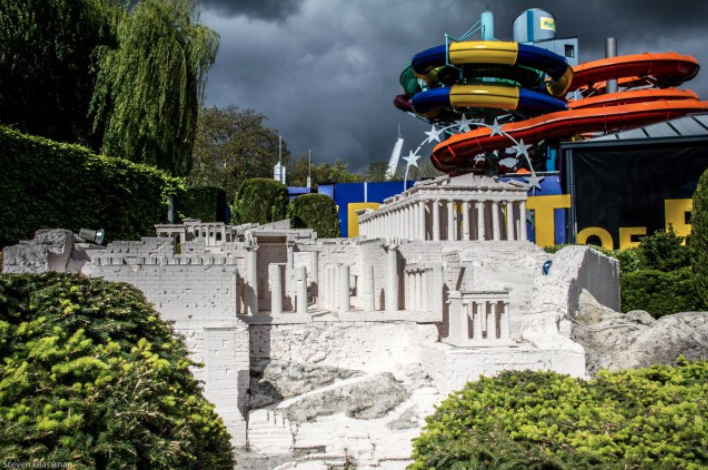 How much of all this is an intellectualized version of playing with dolls? Of preferring to look at the world instead of be of it? Voiceover from Chris Marker’s Sans Soliel: “I’ve been around the world several times and now only the banalities interest me.” Mini-beauties only, thank you.

I arrived at smallness by default. The Kmarts and JCPenneys of my city never carried Men’s Size S. No choice but to shop elsewhere.

The wallpaper of my childhood bedroom was the world. Ocean blue, land brown, each location caricatured by its culturally reductive sign: panda for China, pyramid for Egypt, oil rig for Middle East. After 25 years, my parents have taken the world off the wall. They will paint a deep gold in its place.

From the Mini-Europe brochure: “Europe is under construction and is your future. It is up to you to find out more, to support it and guide it.”

Consider Patricia Schultz’s 1,000 Places to See Before You Die vs Xavier de Maistre’s A Journey Around My Room. Who travelled further? The big demands the skim, the skip-over, the snap judgement. Miniature is the domain of patience. Time to look, look away, look again. It took Mini-Europe employees 24,000 hours just to complete the mini-Cathedral of Santiago de Compostela, and it took me about eighteen months, on and off, to write this.

According to British historian Stuart Laycock, there are only 22 countries the British haven’t invaded. Ideally, it’ll stay that way. When I read in the brochure, “The European Union’s share in the world is falling. From 12% in 1950, it is down to 6.5%, and in 2050 it will be less than 4%,” I can’t help but misconstrue a decline in population as a decline in colonialism. Either way, Europe is shrinking.

Joshua Oppenheimer, documentarian: “I think everything we see is nonfiction. Everything is true.” Though the EU created Mini-Europe as a Europe reenactment, a reduction for PR’s sake, it also accidentally turned its backyard into an art installation, the subject of which is its own enormity and absurdity. Europe magnified is a few old buildings, multilingual propaganda placards, a place to buy lunch, a refrigerator magnet with your name on it.

I found a mini-turtle in Mini-Lithuania. Was I the only one who saw it waving? As I framed it on my iPhone camera, it sang a song, a song like the Disney flume ride anthem, “It’s a Small World,” but different, a copy of

For two full minutes, the turtle sang a cappella in the most gorgeous soprano. And it should be this: my iPhone, attached to a crane, slowly pulls away, and we all watch the screen together, as it reveals Mini-Romania, then Mini-Ukraine, the Mini-Eiffel, until all the Mini-Europeans join the turtle in song,

Singing the words without internalizing the words, most of the men kind of humming or imperceptibly moving their mouths, since it’s too emasculating to sing, and my iPhone continues higher into the sky and we see actual Belgium, France, Spain united by this song just like the song often labelled ‘The World’s Most Annoying Song,’ an en masse plea for diversity and connectivity, written by the Sherman Brothers at Walt Disney’s behest during the height of the Cold War, in the wake of the Cuban Missile Crisis, it was like that song but smaller, and through the iPhone we see Mini-Europes on foreign shores, all fifty-nine of the world’s fake Eiffel Towers rigid and protruding, smiling for the camera, one small iPhone photo after all.

As kids, my sister and I would play “Animal Town” with our collection of plastic figurines, the bulk of which were from Happy Meals. On the living room carpet, we would arrange them into like species and then further divide them into families, for instance, 12 Minnies & Mickeys of varying size would make up the Mouse family, or my sister’s Lion King lions and my Garfield figurines would merge into a Brady Bunch-style family called The Cats, until all the plastic animals from all the conflicting cartoon franchises, often with the words Made In China or Made In Japan branded into the hot plastic of Donald Duck’s mini-molten feet or seared into Simba’s teenage stomach, and they would all come together like that, tagged by their far flung origins, and live in our harmonious, heterogenous living room.
______________
Featured image of Eiffel Tower by Yann Caradec.