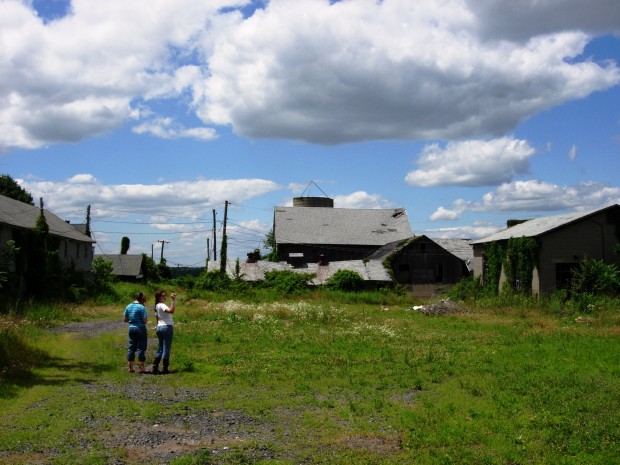 On the Terror Traditionally Associated with Developing Real Property

He’d planted his daughters there, but they’d borne no fruit. He called it a farm though that was the exact thing it wasn’t.

The girls would not listen to their father when he told them not to play in the mud by the edge of the pond. They jumped into the muck with a ripple of laughter, but they soon found they could not move. “Daddy, Daddy!” they yelled, but their father just turned his head away as they slowly sank, struggling against the mire.

On the edge of the pasture, there was a white cow that didn’t know anything about the man or his daughters. To the cow, when they were gone, it was as though they’d never been.

Every summer, the father would drive out to the farm and sit on the edge of the grass and think about his girls. The summers had been dry since then. The pond was mostly dried up and the mud where the girls had played was hard and cracked. Once he put his ear to one of the cracks and listened. He realized that he was relieved to hear nothing.

The farm hadn’t been used as a farm for many years, but the father didn’t have a good word for the unused acres, so he thought of it as a farm anyway, that being the only word he had. He’d planted his daughters there, but they’d borne no fruit. He called it a farm though that was the exact thing it wasn’t.

Once while he sat, a deer wandered out of the woods and stood watching him for a few minutes before it bolted. The father wanted it to mean something, but he knew that it was just a scared deer in the dark.

After a few years the father stopped visiting the farm and, eventually, he sold the land to a real estate developer who built a large complex. Mixed-use, commercial and residential. Luxury condominiums and boutique shops. But the economy stalled and the shops sat vacant and the condominium units sat unsold and a bank foreclosed and sold the project at auction to another developer. The shops still went unrented.

The children who grew up in the development told each other stories about how it was haunted by the ghosts of these girls. They’d been murdered by their father and buried in the dirt by a pond which now was the half-empty reflecting pool around the side of the building. There was a spot of ground that never grew grass, no matter how often maintenance watered and seeded. Older children called bullshit—that side of the building just didn’t get enough sunlight—but the younger ones knew they were right. Why else would the shops remain empty? Why else wouldn’t their classmates come to their birthday parties? Why else would dark shapes appear on the ceiling?

One boy’s mother found muddy footprints on the beige carpet and spanked him for it, but he hadn’t had muddy feet. One girl saw a shadowy figure outside by the air conditioner units. It crawled out from underneath a bush and ran toward the gap in the trees where the utility easement was. Sometimes, there would be a knock on a door. Steps in the hall. An elevator opening on its own. The children collected the evidence and rendered their verdict.

One of the older boys would laugh at the young children and called them babies and weirdos and retards, would push them to the blacktop and stomp on their fingers with his red hightops, would spit and toss decorative quartz at exposed calves, but when he was found face down in the reflecting pool everyone stayed away from the side of the building that didn’t get as much sun. The only question was whether he too would add to the darkness that clumped in the corners of the hallways where the florescent lamps did not reach.
*
Photo by Sara Nović

David Connerley Nahm is the author of Ancient Oceans of Central Kentucky (Two Dollar Radio, 2014). His work has appeared in Little Fiction, Wyvern, Vol. 1 Brooklyn, Monkeybicycle and Pithead Chapel. He lives in Virginia with his wife and cats.