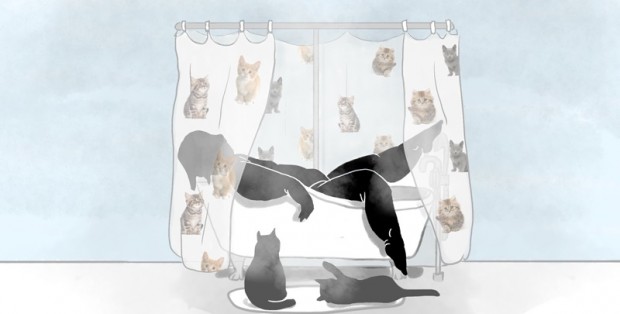 “In the bathtub, behind a plastic shower curtain printed with photos of cats, her head curved in such a way as to force observation of her body. She touched a kneecap, that foreign object. Yes, she said, remembering. You.”

The wife was a soured milk gallon. She spilled over the edge of her chair and smelled weakly of cat urine. The television turned everything into half-beings. Radio, answering machine, stove—all sounds without life. She noticed a plane flying over the apartment. The mailman turning his key in the box. Television made her hungry. Peach schnapps made her hungry. She sipped sticky liquid from a tall glass. She spoke to the animals curled at her ankle. Hi, Lump.

Bert, are you writhing? Bert?

In the bathtub, behind a plastic shower curtain printed with photos of cats, her head curved in such a way as to force observation of her body. She touched a kneecap, that foreign object. Yes, she said, remembering. You.

A past employer had once told her that the cats in photos were dead, stuffed, with glass eyes, but she refused to believe that about her shower curtain cats. These were definitely real—just look at their expressions! She leaned toward the curtain, sucked air in through her mouth so that the plastic attached itself to her lips in an idle play-kiss.

She slid the bulk of herself down, allowing her ears to fill with water. Positioning one leg over each side of the tub permitted her sex to loll below the faucet. It wasn’t difficult for her—she thought of nothing but the sensation. She let out a few short pants and it was done. The water drained in small whirlpools around her. She thought about the pools she had known in her youth. They seemed a part of a different time, a different city, though she knew they still existed, some just down the street, hidden in back yards. They would be empty now, in January.

The bruises on her thighs resembled yellow sunspots; she pressed each with her thumb, staining them white. The television bellowed continuously in the living room. Lump and Bert stood on the edge of the bath and curiously sniffed her damp, prickled legs. She would have sandwiches for dinner.

The husband sliced meats behind a counter in the grocery store. He gripped the hunks mindfully—his steady hands curved around a still bloody roast beef. He said, I can slice turkey thin as paper without shredding.

The customer, a woman with generous hips and a wide, Midwestern face, nodded.

He bunched some meat onto a toothpick and bestowed it upon her as a sample before wrapping the beef in slick paper. His mustache, a bristled caterpillar, twitched as he watched her sniff the meat, then taste it.

Each bundle was sealed with a small gold sticker on which the letters J and M interlaced.

She squeaked out a laugh.

Lorraine became a valued customer. He learned the following week that she had been to Paris once, had sat in wicker chairs and eaten ice cream.

So rich, she said. Must’ve been made with twelve egg yolks just for my little bowl.

He slid the gleaming handle of the meat slicer back and forth.

And the snails! Everywhere when it rains! You see their little shells smashed along the road, but of course, their bodies are just lumps of goo by then.

He had a sudden terrible urge to readjust his hair. No. This smooth-faced woman did not need dark strands in her sandwiches.

After work he folded his blood-dappled apron and placed it inside an old plastic bag to carry through the city park. Large cement steps spiraled upward at the south end. He climbed them, but paused halfway and sat down. The longer he sat on the steps, the larger they became. He was nearly engulfed by sunset. His palms felt rough against the cool concrete. The horizon was curdling into a yellow-orange hue. He pulled out a small packet of sandwich meat from his coat pocket and unwrapped it. He picked off a few pieces of the beige substance and tossed it toward a cluster of pigeons before realizing that it was turkey. Should birds eat other birds? Well, vultures ate everything, and the pigeons seemed to be enjoying it. He put the rest back into his pocket and watched the spotted creatures fight over his offering.

A few beers made the evening slide by. The husband and wife matched cold cuts with yellow mustard and sauerkraut, ate in front of the television.

I miss that show, she said. That one about the guy and his dog.

You know which one I mean?

The dog was a Corgi. With the short legs.

The faint clinking of bottles outside their window startled her. She shifted her weight on the couch. The homeless men were picking through their garbage.

I wish they wouldn’t do that, she said.

He took a long swig from his beer.

The husband lit his first cigarette at ten o’clock in the gray morning light. Snow had started coming down intermittently. He stood in the parking lot of J & M Grocery, next to the dumpster. Like everything else he touched, the cigarette tasted of beef and the counter’s lemon soap; he had learned to enjoy smoking that way.

Lorraine, in a puffy down coat, approached, hanging out the driver’s side window of her blue Volvo. Well, hi, stranger, she said, pulling into the parking spot in front of him. This here is my meat slicer.

He glanced around to see whom she was addressing. Finding no one made his mouth dry.

Do you have an extra? she asked.

He paused, then reached into the front pocket of his denim jacket.

It’s cold out there, she said. I have the heat running. You on break?

He nodded, moved to the passenger side and yanked on the door handle. They sat inside the running car together, relishing the hot air pouring from the vents. While he fumbled for that extra cigarette, she slid her hands under her thighs. He pushed the car’s lighter into its socket, waited a moment, then pulled it back out, presenting her with the glowing orange coils. Do you have to have a license to slice meats? she asked.

Just…just a food handler’s card, he stuttered. You just have to cut against the muscle grain to keep it tender.

Can I see it? The food handler’s card?

He looked at her blank smiling face then reached into his back pocket to retrieve a well-worn leather wallet. The card was buried underneath his ID and an old photo of the wife. She was thinner in the photo than she’d been in a long time. She was crinkling her eyes for a smile, pressing her lips together to hide her gaped teeth.

For the husband there was still the memory of Eva walking around the edges of swimming pools—before, when her body had been small, when it was difficult to find a bathing suit top tiny enough. She had cleaned pools one summer, wearing a paisley bikini with an abundance of strings. He had flipped through her magazines, sitting on the lawns, and watched. She wielded a long pole with a net on the end, to drag out dead leaves. This task took a long time. He looked at the shiny pages about girls’ fashion and watched her dip the net into the pools over and over, watched her skin ripple against her ribs as she flicked leaves on the grass. Once she had carried a drowned rat to a garbage can with her tee shirt, crying.

Lorraine exhaled smoke from her nose. It had stopped snowing and the wipers were squeaking against the windshield. She flicked a switch and blue fluid spurted against the glass. She shook her head in frustration, and then flicked a different switch, turning the wipers off. They flopped into their home at the base of the windshield. Lorraine sighed.

Thanks, he said to her, then stepped out of the car.

The husband sold a lot of turkey that day, as it was on sale for 3.99 a pound. From the meat counter he could see through the glass doors of the entrance that snow was coming down in small eddies. At the end of his shift he folded his apron and placed it inside the old plastic bag. He wrapped up a half pound of pastrami for dinner, then walked to the checkout line where he lingered, considering which chocolate bars to buy. Heading home, his footsteps printed irregular ovals in the snow and he hummed to himself. The tune was soft and familiar.

Madeline Stevens is from Boring, Oregon. She holds an MFA from Columbia University and currently lives in Brooklyn, where she works as a nanny.