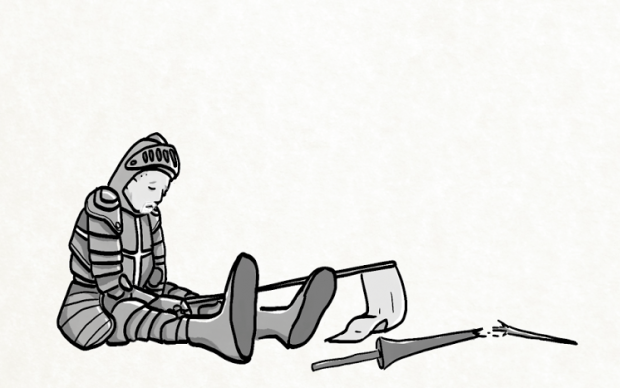 On forcing 738 high school seniors to share a drink they call loneliness.

I am standing in the lobby of a Medieval Times, an hour after closing, basking in the fresh triumph of the Green Knight’s victory. I am riding the sugar buzz of not one but two virgin daiquiris, because my friend Joe did not drink the one that came complimentary with our plates of greasy, utensil-free chicken. I am 18, blonde for some reason, and secretly terrified out of my fucking mind, because I am about to graduate high school. My graduating class was large (738 students), imposing, and from New Jersey—and on our Senior Trip to exotic Orlando, Florida, we considered ourselves obligated to assert these facts at every opportunity.

Earlier in the week, a few dozen of my classmates had bestowed the dreaded ASSHOLE chant upon a family of four who happened to be blocking their view of the Epcot fireworks display (“AAAASS-HOLE, AAAASS-HOLE”). That night at the Medieval Times, when the announcer acknowledged the other groups that were present—a church choir on a bus trip from Georgia, a Girl Scout troupe from a nearby town—several hundred of us booed resoundingly and hurled a few choice obscenities. When our school was finally shouted out—“THE 2005 WASHINGTON TOWNSHIP HIGH SCHOOL SENIOR CLASS”—we stomped the floor like we were at a football game. (This feels like a good time to mention the authentic Revolutionary War-era canon that was fired off every time our football team scored a home game touchdown.) Brutish exceptionalism was the default way of life in my town and so after the show—naturally—the restaurant shut down the lobby for us, so we could have in the lobby of a Medieval Times what our administration was calling with a straight face “A Dance.”

In keeping with that spirit of excess, you should know that my class had not one but two separate senior songs. One that we had chosen, to assert our individuality—Green Day’s “Time of Your Life”—and then one that had been omnisciently bestowed upon us as a part of a tradition that was never fully explained. That one was Billy Joel’s “Piano Man.”

As the forlorn opening harmonica wheezes of “Piano Man” filled the cavernous lobby of the Medieval Times, we did what we had at some point in our WTHS education been trained like Pavlovian dogs to do: We assembled in a circle and joined hands, everyone scrambling to avoid standing next to someone unfamiliar or, worse, sweaty. And, with Vice Principle Greene as our guide, we sang. We sang of Paul the real estate novelist, of Davy who’s still in the Navy, of the businessmen sharing a drink they called loneliness. Maybe it was an early sign that I was destined to become someone who thought too much about music for a living, but right there amidst the smell of hay and overcooked meats I vividly remember thinking that “Piano Man”—a song that is ostensibly about people drinking heavily enough to forget that they did not live up to their high school superlatives—was a terrible, if not outright sadistic choice for a Senior Class Song.

Why “Piano Man”? Where had this tradition come from? I blame Mr. Greene, a VP and assistant football couch who seemed to instill a lot of bizarrely personal “traditions” upon the student body. Perhaps the strangest was that, year in and year out, every single School Spirit assembly involved him treating us to a performance of “Brown Eyed Girl.” Get a good picture of your high school VP in your head right now. And now picture him swiveling his stiff hips and serenading you with a Van Morrison song, in a voice that suggested he may have been in the chorus of a school play or two, but not much beyond that. Of course, you spent the whole time dreading that line, you know the one: “Makin’ love in the green grass, behind the stadium with you.” Teenagers are immune to vulgarity in the regular sense, which means that when you are sixteen, you can imagine someone getting fucked or blown or finger-banged in the patch of grass behind the stadium. In ninth grade I’d even heard of an incident happening there in which a guy who would be known for the next four years as “Thumbs” earned his unfortunate nickname. But no phrase disturbed me more deeply than the thought of an authority figure “makin’ love,” let alone in the green grass, behind the stadium. I shudder even now.

And yet, I feel a little ashamed to be complaining about this. After all, I got what I always wanted, what very few of the other 738 did: I got out. Out of my town, and its bullish way of thinking about things, and that cycle of regret and unrealized dreams that paralyzes the characters in the song. And I feel such an odd guilt about it all that I had to give Mr. Greene a fake name just to tell this story. In revisiting all of this, though, I think I’ve finally solved the riddle of “Why ‘Piano Man’?” Maybe it’s that Greene was offering a subtle corrective to our local exceptionalism, preparing us for fact that the Medieval Times will not always close down just for you and at a certain age no one’s going to fire off a canon every time you do a good job. It might have been even simpler than that, though. I bet he wanted, just once, for someone to genuinely appreciate that secret bohemian streak that ran against the current of my town, to look at the crooner in the starched beige suit and faculty lanyard and think, “Man, what are you doing here?”

Lindsay Zoladz is the pop critic at New York Magazine.