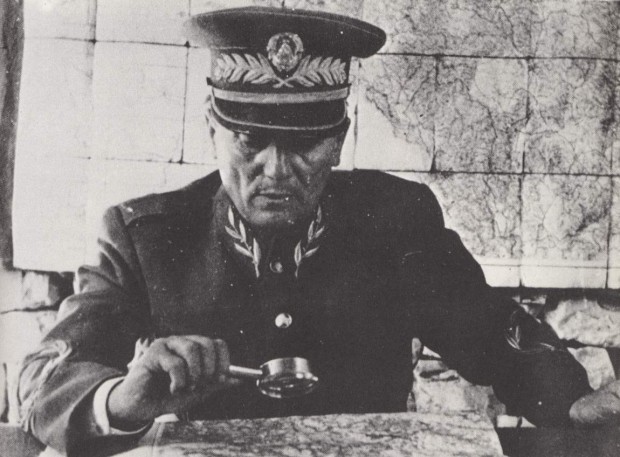 “Dear Usurper, You will find a dozen letters in this house. Each letter, each comma, each sentence, each period on the page is a curse.”

Everyone has been talking in hushed voices about Marshal Tito’s health: There’s something wrong with the blood in his legs.

They’re going to amputate, they whisper.

I read he gave his New Year’s speech from his seat.

Not long ago, the Marshal shot a bear in Karađorđevo. His photograph was in the paper: the Marshal propped his foot on the animal’s spine, and the dead bear eyed the camera.

My room looks out over the neighbor’s pigs.

He has been letting them into his orchard to eat the fallen, fermented apples.

My windows watch the pigs bump into each other under the apple tree. They watch me, too. The windows pass the things they see onto other windows, who pass it on to walls, onto thresholds and door handles until the Marshal himself gets wind.

My room has an infestation of lady beetles. They scuttle across the glass in hordes. The windows aren’t the only ones who watch. Each black dot on the red shells stares.

I remember the day my family moved into the house in Jabuka. It had four rooms and a courtyard. Our first house had been a small apartment outside of Jagodina; I was too young then to remember much, except that we moved from a place named after strawberries to one named after apples. Everything was the same only bigger—and my father wasn’t a janitor anymore. He wrote pamphlets for Marshal Tito. God is make-believe created by the ruling class, he wrote. The monks with their false vows of poverty live in fine monasteries while men like us clean their toilets.

I saw caravans full of Germans moving up the highways toward Hungary. They are being sent back where they came from, my father had said.

The house in Jabuka had belonged to a German family.

I found envelopes full of letters under the floorboards. One of the letters was a family tree, each name a leaf dangling from the branches. Another letter was from a woman named Gertrude. Dear Usurper, it began, You will find a dozen letters in this house. Each letter, each comma, each sentence, each period on the page is a curse. I put the weight of our family’s loss on your spine.

A new building is going up in Kikinda. A big one. I heard about it from a friend: The new depot needs a digger.

I needed a job.

I don’t know how many I lifted out of the soil before Stevan shouted up at the cab and waved his arms. I turned off the engine. A muffled word came through the cab windows. I opened the door.

“Bones,” he said as I stepped off the machine.

He pointed to my bucket.

One poked out of the dirt like a stick.

We will not be destroyed, Gertrude had written.

“What am I supposed to do?”

He handed me a pack of cigarettes and a lighter.

“You and Stevan are the only ones who saw this? And Boris?” Vlatko asked, rubbing his forehead with his palm.

There was a long silence. It was pregnant. Full of bones and full of watching. The sun was a spotlight. Even the bones had eyes. I could feel sweat pooling in my armpits.

Stevan shifted as if he wanted to speak, but said nothing. It’s always best to say nothing.

“I called the authorities,” Vlatko said. He looked tired. “They told me to send everyone home. But we need you to stay, Nikola.”

Five officials showed up and ordered me to keep digging. I climbed back into the cab and turned the key. This time I didn’t need Stevan to tell me they were there. I saw them: ribs and skulls and femurs, hip bones, spines dangling like Jacob’s ladders.

When one of the men motioned for me to stop, I stopped. The headlights on my backhoe were watching.

The officials counted fifteen bodies. Pieces were missing. They found fifteen sets of collar bones, twelve and a half fibulas, thirteen elbows, fourteen skulls. The missing skull drew the most concern. The skull is the human bone.

With the whispers of Tito’s illness, I wondered: if a symbol of a thing dies, does the thing die with it?

The five men loaded the bones into wheelbarrows and took them away. I was told to go home.

The sky is turning black outside my windows, but the pigs still gorge themselves on rotten apples.

I pour myself a glass of rakija. There’s a pear at the bottom of the bottle that I want to eat, but it won’t fit through the mouth. I drink until there’s nothing but the fruit. It smells sweet. It also smells like cleaning agent.

My mother found the family tree under my bed. She took it from me and said, Don’t let their filth contaminate you. Germans are animals. After she took it, the leaves filled with names remained. They burned like eyes inside my head.

I can’t see the pigs anymore, but I can hear them.

Two hogs are fighting. I’ve never heard them growl before.

Your walls are filled with our dust.

We hide in all the cracks.

While the windows stare like passersby, the neighbor comes outside in the night with a lantern and a stick the size of a human femur.

He beats the swine until they stop screaming.

Alexandra Ford is a writer and wine educator from Philadelphia. She has worked as a castle tour guide, wine tasting room manager, and the editor of a compilation of Shakespeare scenes for finger puppets. She holds an MFA in fiction from Sarah Lawrence College and a BA in creative writing from Virginia Tech. Her work appears in No Tokens Journal, and she is currently working on a novel.