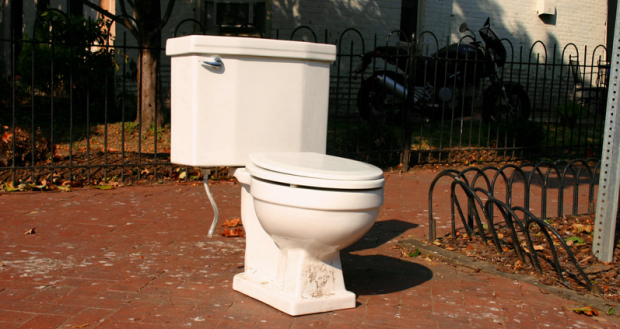 In a short story not for the weak of stomach, one woman gropes for a “glimmer among feces.”

With her plastic purple sanitation glove, Carmen uncovers the toilet seat in the handicap stall. Defecation, the likes of which she’s never seen, pervading the water and sticking to the inner bowl revolts Carmen, who covers her mouth with her sanitation glove in a reflex but instantly realizes her glove isn’t sanitary and removes it from lips, extending it as far away from herself as possible to the point that she feels her arm stretch, and she exhales, “Uh.”

Embarrassed by her volume, Carmen peeks out of the handicap stall to confirm what she already knows: she’s alone. She closes the stall’s door and allows her eyes to look into the toilet again, one more time before the flush. Diamonds, a necklace of diamonds, unless they’re faux, glimmer among feces.

Staring, defecation’s smell becomes more prominent as she lingers. In fifth grade, her teacher taught her that when she smells cookies in her bedroom upstairs even though the kitchen’s downstairs, it’s because miniscule particles of cookie have flown through the air all the way into her nose.

Did someone leave this necklace in the toilet? Carmen will need her yellow forearm protecting sanitation gloves. Hoping no one sets foot in the bathroom, she leaves the stall and goes to her four-wheel maintenance cart. The fourth drawer, like all the drawers, needs wiggling because it’s old and inflated from the moisture it contracts.

When she’s opening the handicap stall, a little piece of her worries the necklace won’t be in the toilet, and all her struggle and the chafing of her forearms will be for nothing. But the necklace is in the toilet, vanishing here and there from masking feces. Chortling, Carmen extends her right hand for the toilet’s wealth.

In spite of the plastic gloving her hand, Carmen feels moistness as she reaches around defecation’s water. Moistness is bitterly cold, but when her fingers squeeze around for the necklace, squishing feces is warm. Carmen moves her arm to the side, looking at the necklace between her fingers, and her gloved forearm touches the dry feces on the side of the bowl. In her nasal cavity, miniscule feces particles tell her body to get the fuck out of the handicap stall.

A successful aha on her tongue and breath, Carmen removes her grasping hand from the toilet. All she removes is feces, and they drip from her fist, which she then shakes open, and feces plop into the water and splatter around the bowl and tile floor.

Diamond necklace rests in the water surrounded by and inside feces, and because of Carmen’s movements in the defecation, a silver emblem, with a faint yellow diamond at its center, exposes itself. Carmen can see the inscription on the bottom of the emblem, not enough to read.

She reaches her right hand for wealth again, squishing around in feces without feeling concrete. Defecation sloshes around the toilet. “It’s there.” The necklace is in Carmen’s sight indefinitely, and she keeps it there while she grabs at it now with both her hands and feels nothing but different temperatures of moistness. “It’s there.” Defecation sloshes around the bowl with the whirl of her arms and splashes above her sanitation gloves. “I see it, Jesus Christ!”

She adjusts her tired back and breathes heavily while staring at the light above. The smell is unbearable. She’s dizzy with questions. Both her hands grasp the sordid bowl, the first concrete thing Carmen’s grasped, really grasped, all day. She drops to her knees and can’t see the necklace because her stomach purges and forces her eyes shut.

Her stomach done purging, teardrops mingle with the other human fluids in the toilet. Again reaching for diamonds, Carmen collapses: her legs straighten out on each side of the bowl, and her face is close to the bowl. Her bent arms, whose bare skin rubs against the top of the warmly speckled bowl, whirls the defecation and forces the diamond necklace into a dance. Inside her, particles of chaos scream at her body to get up, to get up and leave this handicap stall and its diamond necklace behind. She doesn’t.

The clunk of the stall door next to her shutting numbs Carmen, who didn’t hear the customer’s Prada heels clicking against bathroom tiles.

A little over a minute later, a knocking on the other side of the wall, Carmen continues staring at the all too human fluids before her eyes and the dancing necklace she can’t grasp. Another minute or two, and the knocking again asks if everything’s OK.

“No,” Carmen says into the toilet.

Adam Berg is new, a candidate for a BA in Philosophy from Skidmore College, and a lover of all things but in particular Miley Cyrus’s twerks and burgers where the cheese stuffed inside oozes out.