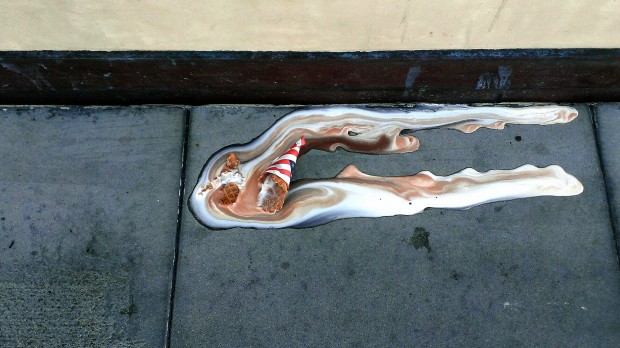 “Look. When it gets bad for me, I want you to do me just like you did that dog.”

Mama moved out. Said she was tired of “their bullshit” and that it was time to go live with her cousin in Azalea, Louisiana, where she could live the life of a “fucking lady” like she deserved. Sheila was the dame of the house, now, but Shoney knew he’d have a lot of new things to do. Hidden necessaries would come out around Sheila, he figured.

Mama’s best ice cream was still in the freezer. Shoney and Sheila agreed that they should eat it together, and listen to the CD Mama had left on the t.v., and then put the ice cream carton on the fencerow with a Post­It Note sketch of Mama in her favorite wig, and shoot it. Target practice. But Shoney finally just threw the whole frozen mess into the driveway. Never mind the music. Sheila was drifting and tired. She scraped her arm against the mailbox.

Shoney was surprised to find Mama’s dog–Brent Scowcroft–hanging out in the bed of the pickup truck. Mama had left him behind, too. His right eye was eaten through with a cancer, and the scaly tumor had begun to alter his skull.

Sheila pulled Brent out by his back legs until he fell out of the truck. He was whining, what a mess. Shoney cocked his .22. It was all he had.

Sheila leaned there trying to catch her breath. “You got a cigarette?”

“I got my e­cig. You want it? Or does that go across your meds?”

Brent nibbled at a flea in his fine black tail.

Sheila puffed, made the little blue LED work. “Well, it would be easier if you’d just do it. Just shoot, come on.”

“I know. But Brent’s so good. He was good for Mama. Really good, up until all this, and you know it.”

“Quick is mercy. What you want to do, just let the cancer eat him up? We’ve talked it through plenty, now Shoney. Mama left him. Here to die.”

“Well you shoot him then, Sheila. If you so damn hard.” She just looked at him. Brent was up now, panting at her, trying to make up with her for being dragged out of the truck. She took a chunk of hot dog from her pocket and pushed a couple painkillers in.

A while later, a breeze from the north, and the dog was dead. Moonlight was bright on everything. Sheila sat with Shoney on the tailgate watching the stars and the dark lump of the dog’s body.

“Do you believe in UFOs?” he said. “Somebody coming down here from real far away?”

“Look. When it gets bad for me, I want you to do me just like you did that dog.”

“Don’t get excited about it or nothing.”

He smiled. “That little black train is coming. Everybody has to ride on it.”

“Better clean this up,” she said. She hopped down and picked up the shovels. They got about three feet deep before giving up. He pulled Brent in, and the body twisted up. Sheila threw in her empty pill bottle. Sheila leaned against the truck, wheezing.

“That was nice of you, to give him Lortabs.”

“You could see it helped him.”

“Yeah. He barely felt it, probably. Just like a rubber band snap, probably.”

They pushed in the dirt, got it packed down around his fat little tummy and his hardening legs. Sheila found two sticks, laid them as a cross. Shoney found a chunk of cinder block in the bed of the truck, put that down on the spot.

“How we gonna break it to Mama?” he said. He put the shovels back, closed the tailgate.

Shoney chuckled. “Bull. Well, let’s stop at the DQ. I want to wash my hands. Maybe get a Blizzard.”

Sheila got in the truck, and he cranked it up, put on the headlights, tenderly picked his way back down the trail toward the open spot in the fence. Then he hit a deep rut on the way out to the main road. Sheila smacked into the dashboard.

“Yeah.” She was breathing hard, and one side of her collar was flipped up. “I don’t know. But I think so.” Hairs out of place on her brow.

“Put your fucking seat belt on,” he said.

She did, right away. “Okay, that’s right. I should wear my seat belt.”

He backed the truck up, cut the wheels. He got out of it. Nearly to the lights of the highway when Sheila said, “I think I do believe in UFOs. We might have some space brothers and sisters. I’m not New Age or anything, but that’s what I think.”

They got ice cream and went back home.

The place was way too quiet now. The counters were dusty and the microwave stank. Light from the one kitchen fluorescent lit up the specks on the coffee­-stained countertop.

Sheila put Brent’s chew toys and feed­bowl in a brown sack, and put the sack out on the porch by the wheelbarrow. She squeezed some sani­gel onto her palms, rubbed it in real good, then rubbed her neck with it. “Maybe space is where we go when we die.”

“You ought to take me to the doctor’s tomorrow. My neck hurts.”

She went to bed, and Shoney nuked some ham and put on the Weather. He went to the kitchen again and fished out another Lortab from her weekly pill box.

“Nothing Mama. How’s the new place?”

“Well. I was almost asleep. I’m doing good. I’m doing a Lord of The Rings marathon.”

“We killed Brent. Put him down. And I’m about to tear the paneling out of this kitchen.”

“You put down Brent tonight?”

“Yeah. And ‘yeah’ about the panelling too. I packed the dishes up. Got my clawhammer, that’s all I’ve got. Can’t find the sledge.”

“I think there’s a four­-pounder under the sink.”

New pipes, new panelling. “Everything will be new,” he said.
*

Woody Evans is a librarian from Mississippi, now living in North Texas. He has written for Juked, American Libraries, Boing Boing, Rain Taxi Review of Books, New World Writing, and many others. He likes to whittle, travel, and play with Legos.