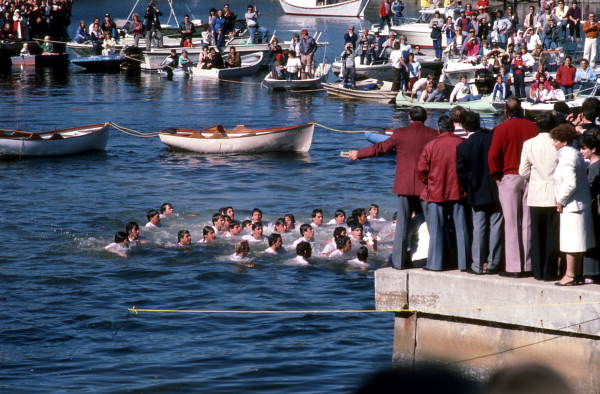 I’m not saying that’s not sad, I can see how sad that makes you. So if you say you’re sad, then yeah. I’m just asking if you’re sad for the right reasons. Sadness can have a correct angle of attack, which implies there are incorrect angles, maybe a whole lot of them. But I’m sorry you’re sad. I’ve never thought about oranges that way. Oh, I get that beautiful things come so often to us with the hint of decay – that banana, for instance, is a goner in a few days. You eat them with the spots? Not me, something about the mouthfeel. My mom called them sugar spots, but who was she fooling? And if I pulled off those little banana threads, part thread, part peel, she’d say “You know you can eat those.” When I topped and tailed beans, she’d get mad. Have you ever eaten beans with the stem intact? Now that’s something to be sad about. The hard rasp of it down the throat. It tastes like eating poor. But those grapes? Grapes are the fruit of wealth. It’s always women in blowsy tops and guys with the breath of warm milk holding full grape stems – see, there’s the symbolics of it, plucked grapes not yet consumed, in the hands of the young. The fish, the two loaves of bread, the clutch of pheasants, a hare hanging by a foot, tomatoes, I’ll give you some sad. If my mom were still alive she’d be the one a little angry, asking the question: Who in the world is going to eat all that?

Gah, look at your floppy little neck, the way the head crashes forward into the chest. Here, let me help. Oh for god’s sake, let me help again. At least stop forgetting how weak your neck muscles are. You’ll grow out of this, right? Look at your feet rounded from never touching the ground. Your tight little fists, those fingers webbed and welded together. When my son was an infant, I had to unwind long strands of my hair from his fists. No one clenches harder than a baby, and I had to pry his fingers open. He’d scream as if I were taking his birthright. What’s that mewling sound you’re making? Isn’t sign language all the rage these days? What do you mean you have no fine motor control? Let’s practice picking up pennies. No, don’t put it in your – give that to me. My brother once shoved a dime up his nose. Last week my son, now seven, put a rock up there. Apparently there’s a connection between young boys and noses that transcends generations. Do they ever shove things in their ears? Hey, I’m asking you a question. Tell me what you know about boys.

Every day we wished for someone to invent the cell phone. We walked around a little lost, our arms held out as if we were walking dogs, but not many of us had dogs. Where was Sue? I mean, right now, what if we had to find Sue? In that way, Sue was lost to us when she went shopping and held the different heads of lettuce in her hands. Weighing her options without us. Wishing she, too, had a cell phone that had yet to be invented, since in our circle we have a carrot expert who knows Chantenay, Imperator, Danvers. This was before the bags of baby carrots. The food industry had yet to shape our desires. Janelle thought meat would be big soon and we couldn’t wait. We wanted the next decade in our throats. Barnyards we eyed up and dreamed of a day for bacon, another for marbled steaks. We hated the constant not-now of the future, the fantastic mixed drink recipes that would come from someone who was now only a toddler. How happy we’d be with one of those drinks! We mimed the paper umbrella, our fists circling the ghost drink, bringing it to our lips, our slurping exaggerated and overjoyed. The other hand air-dialing Sue, letting her know everything she was missing.

Karen Skolfield’s book Frost in the Low Areas (Zone 3 Press) won the 2014 PEN New England Award in poetry. She received the 2015 Robert H. Winner Memorial Award from the Poetry Society of America and the 2015 Arts & Humanities Award from New England Public Radio, and has received additional fellowships and awards in 2014/2015 from the Massachusetts Cultural Council, Ucross Foundation, Split This Rock, Hedgebrook, and Vermont Studio Center. New poems appear in Crab Orchard Review, Crazyhorse, Guernica, Indiana Review, Tahoma Literary Review, and others; she teaches writing to engineers at the University of Massachusetts Amherst. www.karenskolfield.com