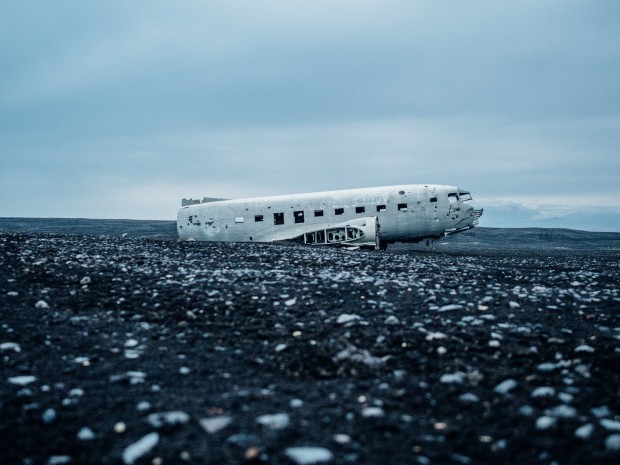 “Because he said that if he didn’t want to be here, he wouldn’t be here, you now think about that when he is not here.”

They say, anyway, that planes are most likely to crash within the first three minutes of flight.

When he is asleep you cannot help feeling that you have lost him. That the body next to yours, chest rising and gently falling, is not him. That he has gone away to some other place. That you have somehow been left behind.

It happened so slowly, and yet quickly too. On the couch there was an ocean between you, and then there was not.

And now here he is in the street, gentlemanly, flagging the bus down for you like he is hailing a cab.

Most days in this world you exist without him. You subsist on memories. You bide your time.

Your apartment looks out over the building’s dumpster. There is a man here digging through it right now, pulling out half-broken things and laying them carefully at his feet. He has been doing this for about twenty minutes. At times from your open window you think you can hear him crying.

You try to imagine moments in the past of which you were both conscious. The World Trade Center falling, and much later, the gallery opening, the film festival. Sometimes you wonder if, that summer, you ever passed each other on the street.

In the mornings he is nearly incoherent, mumbling things in your ear that sound only somewhat like words.

Moments when you are truly asleep are rare. Mostly, like the insect that looks and acts like a stick, you are only pretending.

It is never peaceful here. There is always someone yelling, the crash of returnable glass bottles, cars speeding by. The other morning you woke to the vibrations of construction workers drilling into concrete.

When you get up in the middle of the night he notices. He curls his sleepy body into the space you have left behind, and when you return it is still warm.

You are systematically reading all of his favorite books. Your thought is this: that if these romances with literary men continue to fail at the same rate, by your old age if still single, you will at least be very well-read.

It is not until you have supposed yourself into some dark and terrible future that you are able to remember that really, you have no idea what will happen.

Here where you work you are always told when something is broken, but you are never told when it has been fixed.

There is a man making his way down the street by your window, yelling, over and over, the word “nothing.” However, he has a speech impediment, and thus it goes like this: “NUTTING, NUTTING, NUTTING…”

Here in this book about weasels, you read that a weasel attacking an especially large bird runs the risk of being carried off into the air because it refuses to let go of its prey while it is still moving.

Your friend is dating a man who comes over to her apartment most every night. He arrives around eleven, after he gets off work, and promptly falls fast asleep in her bed.

Because he said that if he didn’t want to be here, he wouldn’t be here, you now think about that when he is not here.

It is bad form, someone says, to say that you are a nominee for some certain prize when really, you were not selected as a nominee, but rather nominated for consideration as a nominee.

“I’m not ready,” your friend says over drinks one night,” For a ‘hi honey, here’s your beer’ kind of relationship.”

The building that you pass on your commute home has now a new doorman. This one looks the part, but you still wonder about the old one, the man who never looked comfortable standing out there, who never seemed quite sure of what to do with his hands.

From the window of your friends’ apartment you can see the Empire State Building. A brightly-lit triangle in the dark; it is blue now, though you are certain that earlier it was red.

Yes, it is true that you have left, that you have crossed the country without him. You have gone away, but you will come back too.

Someone you used to date told you a story once, of a couple that his friend knew. These two, a man and a woman, had met and started dating. The woman had had to leave town for a brief time, to go back to the city where she was from for a visit. While she was away, the man lost touch with her. He never heard from her again. After extensive efforts to track her down, he at last learned that she had died in a car accident while she was away.

Lying too long in this large and unfamiliar bed, you try to recall the geography of his back.

Your friends in the city take you out for drinks. You spend twenty-four dollars and leave the bar with only a headache.

Though you want so badly to call him, you want him to be the one to call you, and so you find reasons why you must wait, why you must not call him.

You told yourself that you would not play these kinds of games anymore, but you are very good at breaking your own rules.

You didn’t tell him about your friends’ friend in Brooklyn. The one who said that you were cute.

Really, you imagine that time slips easily through his fingers, that unlike you, he does not count seconds, hours and days.

But mostly you are glad that he cannot see you now, with your messy hair, your runny nose, your sunburnt face.

And when a tall and handsome man opens the door for you, you still cannot help but blush.

But here you are imagining ways in which this could end, as if you actually want it to end.

Then the dirty floor gets suddenly closer, and there you are, arms and legs splayed out like some rag doll.

And having now this new vantage point, you ask yourself once again, “How does it all look?”

A man on the platform asks if you need any help and before you tell him no, you think about all the different things that the word help can mean.

The people nearby who saw you fall say that you did so gracefully.

You and your friend apply facial masks made of clay. In the kitchen window you examine your reflection, picking at the dry cracks on your face until she points out that the neighbors across the way can see you from their window.

At times you wonder if that blue-rimmed glass in which he brought you water that first night is still sitting on the floor in his room, its water now, after all this time, evaporated.

When you were young your mother said that you had a tendency to “put all your eggs in one basket.” You do not need anyone to tell you that this is still the case.

But how might your life have been with those other men, had you merely said something or smiled, allowed yourself to be walked home so late at night?

Of course, there were always those men who, having walked you all the way to your door, would then refuse to come inside.

The journey back seems endless. Train to train. Plane to plane to train again and at last here you are in the place where he is.

Towing your suitcase through the dark, you imagine him behind the wheel of every passing car.

Though you spend countless minutes gazing into the mirror each day, you are unable to imagine how you look, standing now, waiting in the twilight. Out here visions become murky, ripples form and vanish on the surface.

It was so easy when you were away to imagine how things would be. It was so hard to actually know.

You can see him like your future coming, his shadowy figure crossing eleventh and making a left now at the corner. In a minute or so he will be here. You stand and you wait, and as he gets closer you strain your eyes, trying to glimpse the expression on his face.
*
Photo by Liquid

Delphine Bedient is a writer and maker currently based in Portland, Oregon. A book of her short fiction, Down and Out on a Yacht, was recently published by Two Plum Press. She spends most of her time touching books.