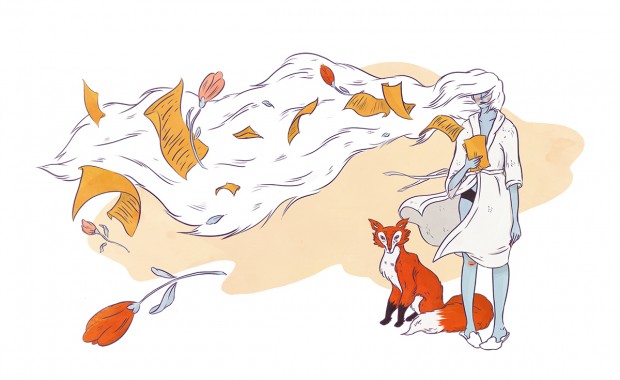 A fox passes the window, while I, with my tea, attempt amends to those who I have harmed. In the sleeping house, I PayPal back debts I owe: a dress to be altered, a bowl of Marcona almonds, the French tulips you bought your frustrated wife, twenty bucks for a cab home. I apologize. I write letters, and letters become words, become even whole sentences, btw I’m dfw. LOL. I find time to write things that might help salve the damage that I have done. Also, I try to bring goodness in form of fruit pies and small re-gifted soaps where previously I had not only showed up early (tsk-tsk) but also empty-handed, save discourse and destruction. In the end (because They tell me I should acknowledge the end), I was on an eastbound train drinking from a paper bag. Even the men in the bar at TGI Fridays knew what foxes do to toddlers. It takes insight, courage and dedication to make such amends (They say), but now I have the help of the poems to know what to do and how to do it. Listen: the fox is not a metaphor while he is in your yard. Only after he has darted into the woods can he become something else. Mornings, I earnestly seek the right way to go about this process; nights are harder. Alongside the rabbits, I attempt to live the kind of life meant for me to live all along.

Nicole Callihan writes poems, stories and essays. Her work has appeared or is forthcoming in Forklift, Ohio, PANK, Painted Bride Quarterly and as a Poem-a-Day selection from the Academy of American Poets. Her first book of poems, SuperLoop, was published in early 2014. A Senior Language Lecturer at New York University, she lives in Brooklyn with her husband and daughters.