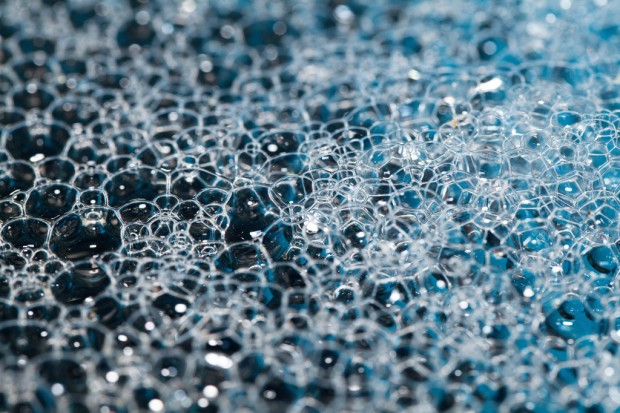 “Without the benefit of the diagram, you might just start clapping, creating tiny explosions that spread myriad pustules of anti-bacterial hand soap all over…”

Just below the diagram that shows how to wash your hands is the brand new electronic soap dispenser. It’s got sensors so you never have to touch your skin to anything more concrete than air. The assumption that gave rise to this important technology is that everyone’s hands are Petri dishes of germs, transference of which could occur if flesh touched the soap pump, like on the old manual dispensers, because, seriously, how much is really known about just who’s previously touched that thing anyway? It’s a reasonable fear.

Sophomore Jennifer Mendoza lost her battle with (choose infection here) this morning. It’s assumed that Ms. Mendoza caught the virus after touching the soap dispenser with what is assumed to be her right hand – Coach Meniffee confirmed that Jennifer is right-handed, because she’s always spiking the ball with that fist, a trait that nevertheless has kept the Scorpions in the never-won-a-game column of women’s collegiate volleyball in Southern California—then, instead of washing her hands, Jennifer inserted her fingers into her mouth, which, as we all know, sophomores are always doing. How could the germ hordes interpret this gesture as anything but a green light – tacit permission to charge forth down into her pristine gorge?

Jennifer will be missed. Her memorial service was well-attended.

But now, with sensors sensing proximity of anything, it spits out a premeasured blob of white anti-bacterial soap, accompanied by the sound of a tiny mechanical grunt – a plaintive plastic belch made by a mechanism that you’d love to see because it’s got to be the cutest little bladder ever, all plastic and full of foamy white germ poison miniaturized inside an impossibly tiny machine and expelled into what is assumed to be an upturned palm. And this blob, which is less than you might actually pump if left to rely on your free will and sloppy judgment, just slightly less, just a pinch less than the amount of soap necessary to kill off approximately 100 percent of germs on your hands, because studies have been conducted—exhaustive studies—to determine the lethal dose of soap to the legions of lurking, leering germs malingering on the surface of your hands. And you’re always mindful that the cost of these studies—the cost of certainty—is mitigated by an acceptable margin of error laid out in detail within the pages of graphs, cost/benefit analyses and tables prepared by ranks of actuarial-type folks who, in an attempt to resist conforming to the stereotyping of these people which lumps them into groups of skinny-armed bespectacled non-entities who subsist on frozen dinners chewed by flossed teeth that nevertheless fall out prematurely, I will describe as muscle-bound nerdy jocks with prowess of all kinds and enormous bulges at their crotches—comparing, over say a year or so, the number of accumulated miniscule units of electricity needed to fuel the tiny squeezes of the soap bladder, to the cost of a human life, even one human life (or so), which, it’s assumed, by virtue of the location of this electronic soap pump: just along the left wall of the bathroom (squarely facing the toilet) of a small liberal arts girls’ college, would grow to evolve into a satisfied grocery buying, television-watching, Internet shopping, tax-paying broodmare who’s got a penis pump-buying, midlife-crisis-sports-car owning, tax-paying husband and a litter or two of troubled iPhone browsing, first-time-buying, anti-depressant-grinning, tax-paying progeny, instead of a dementia-assailed, kidney-failing, hospice-dwelling victim of infection who can do nothing but continue to drain any remaining vitality from society.

This taxonomy of cleanliness next progresses, logically, to rinsing the poison soap off the hands while under a stream of water, an activity which unfortunately rests well outside the realm of advanced technology, even though you’re pretty sure that such technology is identical to the soap-dispensing kind. But the faucet remains sensorless, and you’re just left with one of those stupid facts of life: You’ve got to touch the thing in order to rinse your hands. Hopefully this isn’t an oversight. Hopefully it’s an intentional feature born from scientific consensus: The belief that no matter how virulent or hardy faucet germs once were, evolution itself has rendered this last faucet-dwelling stronghold of the Republican Guard of Germ Mordor no match to the constant bombardment of poison-covered skin. It’s simply a nod to Darwin himself, who predicted that no family or genus subjected to a sustained, prolonged attack, barring Divine intervention, can survive such punishment, unless said germs, like the organisms living alongside gas-spewing undersea volcanic vents are able to grow and thrive on boiling sulfur jets themselves. The world of the unplanned-for anomaly, like a non-carbon-based life form dwelling in a carbon-dominant—actually, carbon-defined environment—or Russell Stoakes’ impromptu crusade to the front door of the chair of the math department where Russell, after being denied tenure, was photographed (duh—it’s 2014) pulling his substantially oversized dick out and urinating on said front door, the resultant video file serving as the evidence that not only got Stoakes fired, but actually arrested and subsequently convicted of a sex crime because students (duh), the defense to which was obvious: 18-year-olds are adults—a fact not vigorously emphasized during trial because students nonetheless (duh), because Stoakes, even after having achieved a substantial level of success in manipulation of puerile formulae, which objectively has more in common with setting the table for Queen Elizabeth and Guests than the embodiment of a fuzzier, kinder, more mature and humanistic set of values, had planned his entire formative life to stowaway if need be, then climb his way up through the decks and ranks of the good ship Large Animal Veterinary Medicine where he imagined himself, after clutching a degree in one hand, using his remaining hand to probe deep inside the uterus of a horse or—it can’t be true but I’ll go ahead and say it anyway—or a wild elephant to help in the birthing process because he saw it once on the Discovery Channel, and it was, objectively, less analogous to maintaining symmetry than just being plain awesome and really, really interesting.

Then there’s that hand-washing diagram, just above the electronic soap dispenser, consisting of a graphic representation of just one hand overlaid with several bending arrows pointing in this direction or that, an important reminder that after having soap pumped into your palm you should actually rub your hands together, always being mindful that the shape of your fingers actually invites a vigorous hand-scrubbing motion rather than, without the benefit of the diagram, you might just start clapping, creating tiny explosions that spread myriad pustules of anti-bacterial hand soap all over the immediate area around the sink, which, without near constant vigilance, would create the need for the paid-by-the-hour janitorial staff to spend unplanned for amounts of time scraping and scrubbing these dried white peaks of poison meringue from the otherwise pristine face of Sea-Green bathroom tile walls.

Paper towels can be touched – grabbed and pulled with complete abandon because they’re only used once and then thrown into the trash. Adding a sensor to a paper towel dispenser would not only be unnecessary, it would land such a sensor-equipped dispenser within the realm of useless decoration, much like the tassels on your brand new Rococo loafers. So you dry your hands, and as you do, you look at your reflection in the mirror and are slightly distressed—again—by the fact that you’re not getting any younger. But this time there’s an additional facet to this unfinished gemstone of regret: you wish, just quietly to yourself for now, that you’d taken another path, because you’ve got something to say—you’ve got a lot to say to your sleepy students, not about rhetoric or arguments, audience or genre, but about how the effects are felt to this day, in this very bathroom, of colonialism and the inflated valuation of the ruling classes that espouse the notion that the benefits of hands-free electronic soap dispensers and sterile paper towels are reserved not for the people who regularly unlock the devices and fill the reservoirs that feed those darling bladders with poison soap, and restock the dispensers with paper towels, but for those who’ve earned degrees and been hired to teach, or paid tuition so that they can be taught, and, when the need arises, can freely, with disregarded privilege, enter this brightly-lit Sea-Green tiled getaway, lock the door and shit and piss with abandon.
*

Doug Weaver lives in Southern California’s provincial capitol, Long Beach, with a cairn terrier named Duffy. They sleep together. Often, before nodding off, Doug turns to Duffy and says, Duffy, will you accept this rose? Duffy is noncommittal. He can be reached at weaverdoug@yahoo.com.