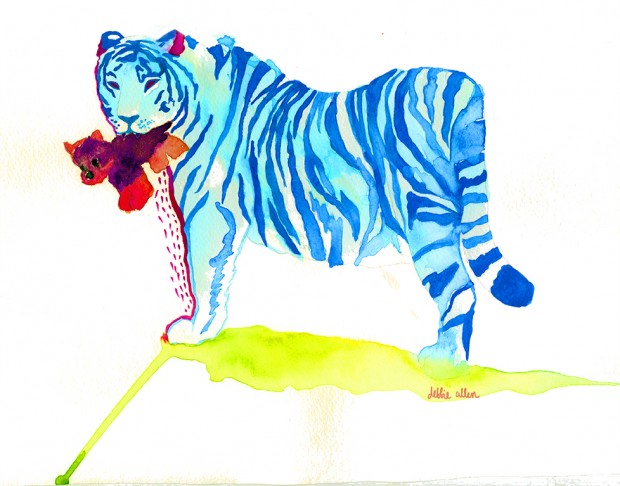 “She guessed that’s what love was–making each other feel bad on purpose and then being sorry about it.”

“You’re a grown man,” the woman said. “What do you need a stuffed animal for?”

The couple had been arguing on the phone for an hour and a half. The man was on a trip to visit his sick mother in Minnesota, and the woman stayed in New York to take care of the dog and the apartment. She didn’t know when he’d be back. He didn’t either.

“Oh, but she loves it,” the woman said, ruffling the fur of the terrier lying on the bed beside her legs.

Before the man left, the woman had given him a small plush tiger that she’d found in a gift shop on Avenue B. It was strange because it was blue. She had never seen a blue tiger before. Sleep with this and think of me. He thanked her and said he would, but the day after he left, she found it in a pile of dirty laundry beside his dresser. She thought he must have misplaced or forgotten it. Surely he didn’t leave it behind on purpose. She threw it to the dog. She’ll enjoy it more anyway, the woman thought.

“I loved it, too,” the man said. “I’ve been looking all over for it here. I thought it must have fallen out of my bag somewhere.”

“She throws it up in the air and catches it,” the woman said. The dog rolled on its back and the woman poked at its teats, absently pinching at the little pink nubs.

“Take it away from her. She’ll destroy it.”

“The beans in the stomach–she loves how they feel in her teeth. I’ll just get you a new one,” the woman said. She was lying.

“She loves this one.”

The dog was taking perfectly fine care of the stuffed tiger. She hadn’t made a single hole in it yet. She only gnawed at the stomach area and around the eyes. She slept with it like it was her pup.

“This is fucked up.” He was crying now.

“Would you stop?” the woman said. She was angry now that he was crying. He always did this. She pushed the dog off the bed to give herself room to stretch her legs. “If you liked it so much you wouldn’t have left it behind. She cares more than you do. You left it here in a pile of dirty laundry.” If he was going to cry, she was going to turn this around.

“So it’s my fault?” the man said. “Sorry I forgot it. Now admit that you made a mistake giving it to her.”

The woman knew how to win this one. She apologized. “I made a mistake,” she said. “I shouldn’t have given it to the dog, it just didn’t seem like you liked it very much. I bought it especially for you, and when I saw that you left it here, I got upset. I gave it to the dog because I knew that she would appreciate it.”

“It’s a four-dollar stuffed tiger,” the woman said. “Can’t you let it go?”

“I wouldn’t take something of hers. I wouldn’t do this to you.”

The trick to winning arguments was telling him what he wanted to hear, apologizing profusely, letting him think he held all the power, and then making him feel stupid.

“Share it with her at least,” the woman said. The dog looked up at her from the floor with the tiger in its mouth.

“What if she destroys it?”

“She won’t,” the woman said, taking the tiger from the dog and throwing it across the room for her to fetch. She was thinking about her ex-boyfriend now. She had never been on the accused side of things in that relationship. He was always the one doing something wrong, she started the fights, he apologized and it was over. Now, a year’s worth of accusations taught her how to somehow still come out on top. She just had to make him crack. It took persistence. It was a miracle he hadn’t figured her out yet. She knew every centimeter of him, every angle, every possible trajectory.

“She gets everything she wants.” the man said.

The woman didn’t say anything.

“Do you think I’m wrong?” the man asked.

“Fine,” the woman said. “I’ll take it away from her, and I’ll begrudge you for making me do it.”

“You did this to yourself,” the man said.

“You’re ridiculous,” the woman said. It was a waiting game. She felt a sick kind of joy from provoking him, convincing him that he was wrong, making him feel sorry.

“For having an emotional attachment to something?” the man said.

“You barely even touched it. You left it in a pile of laundry,” the woman said. “Dirty laundry.” She really thought he was too sensitive sometimes. She couldn’t stop thinking about her ex-boyfriend now. He didn’t care about anything. She hated that about him when they were together, but now she missed it the same way she missed the way his hair smelled like burnt chocolate and the embarrassed feeling she got when she first introduced him to her family–a feeling quickly overtaken by rebellious pride. She wondered what he had been up to the past year and a half. He was back into drugs again, surely.

“Maybe you should have taken better care of it.”

“Just stop.” She was getting bored with the back-and-forth.

“All you’re doing is making me feel bad for wanting my gift back. You still haven’t apologized.”

“I apologized,” the woman said. It was working.

“But then you made it out to be my fault. Don’t you care about my feelings?” the man said.

“You’re overdramatic,” the woman said. “I have to go. The dog needs a walk.”

“Whatever,” the man said.

She turned to the dog. “You would never leave me, would you?”

The man hung up. Moments later, the woman received a text message. It was from him. I’m sorry. For everything, it read.

Why are you apologizing now? the woman responded.

I love you. I’m sorry for being an idiot. I feel like shit.

I’ll give you the tiger back.

For all the reasons you said I should.

It worked. She won. But for some reason, the woman didn’t feel proud. If anything, she felt sorry for him. She guessed that’s what love was–making each other feel bad on purpose and then being sorry about it.

That’s not what I wanted, she replied. And a few minutes later when she got no response she sent, I love you.

The dog brought the tiger, and she threw it again. She didn’t know what she was supposed to do now. She went to the kitchen to pour herself a lemonade, and lit a cigarette. She took a drag and sipped her drink before the exhale—the smoke came out sweeter that way. He’d taught her that. When she got back to bed, she checked her phone once more. No response. She scrolled through her contact list and selected her ex-boyfriend’s name, then Create New Message.

Hey, I’ve been thinking about you. Hope all is well.

She sat a moment, reading it over to herself. She waited an extra minute or two for a response and when she didn’t get one, she pressed Send.

Rhianna Reinmuth graduated from Emerson College with a BFA in Writing, Literature & Publishing and will be pursing her MA in Fashion Studies at Parsons in the fall. Her writing has also appeared in the catharsis and Concrete.