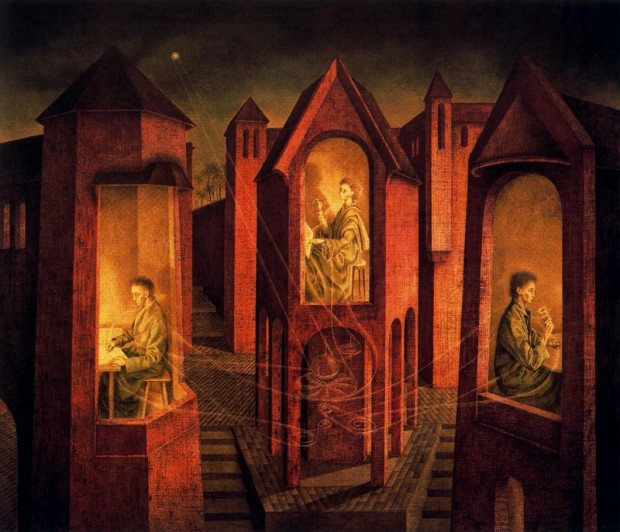 Each time I have read Job’s complaint, I have thought,
what’s worse? The misery of losing one’s children
and wealth, the humiliation of a wife’s contemptuous curse,
the pain of unsightly boils and ash on the skin,
the doubt of a handful of alleged friends who say
surely, you must have done something to deserve this,
or a visit from a God who reminds you that you are abject,
a mite on the border of subjectivity, utterly powerless
in his midst, precisely because he created you that way?
Impossible to know Job’s misery; impossible to fathom
his silence at the end of that book, which, in the end,
may be even more compelling than his lament. In that silence,
I can imagine him understanding a thousand varieties
of misery in the world, especially those
that have become only more creative over time.
What might Job have thought of the many doctors who,
when commanded by Franco’s men, took hundreds
of newborn babies from their mothers as they trembled
on the delivery table. It took only a few moments
for the doctor to leave the room and then return
with a somber look, a simple story of loss
and God’s plan, a death certificate typed
on a typewriter that skipped a little each time
the typist used the “A,” and a promise that a tiny
wooden coffin would offer the baby shelter as its body
and spirit endured the inevitability of Purgatory;
and then, while that story was told, there would be another
unfolding, a miracle play of sorts, in which the gravedigger
would push his hoe into the ground behind the hospital
then bury the empty coffin, and the typist who composed
the death certificate would type a birth certificate as well,
but this time for a different name, and no parents,
so that the baby who never died would live as a phantom
in a Spanish orphanage. Such creative work
to ensure that Franco’s babies would not
lean to the left, not tell the secrets of the fallen,
not ever try to win the Republic back. For Franco, the world
did not contain enough mystery, enough unsolvable crimes.
How much more interesting to have a nation of orphans
grow to adulthood, every day looking into the eyes of every mother
on every park bench, every last one a helix full of dissidence
living up to the Latin archaeology of that word, dissedere,
to sit apart, to be foreign to one another, to never know
the other’s truest name.

Twelve Robert Johnsons! Maybe one made a deal
with the devil. Guitar virtuosity bumps you up the watch list.

Saddam Hussein (after his death), the 9/11 hijackers
(also after death): my companions on the watch list.

The blood of Islam runs in every Spanish vein.
Perhaps that’s why some of us are watched thus.

One of twenty methods of interrogation and vetting,
the most benign of which is the TSA watch list.

“To understand just one life, you have to swallow
the world.” I believe you, Salman: you’re on their watch list.

One man shackled to the chair as his wife waits
without food. Through plexiglass, she watches, listless.

“Oh yeah. In the new century, I think we will all
be insane.” Diaz is half-way there. Watch this.

When she looked at my mother’s corpse on the gurney,
she didn’t see the sun that had seeped into nearly every pore
in those final years when my parents spent one month
each winter in Ft. Myers; she didn’t see my mother beam
cherry pink at Bingo games, at Perk-and-Glaze socials,
at water aerobics in the community pool where, each
morning, the women played a tape on a boom box
and drifted obligingly to the recorded instructions
but mostly used that hour to gossip about the women
who brought casseroles to widowed men who dotted the map
of the community like an epidemiological crisis. The nurse
couldn’t have seen my mother’s chest as broad and high as a shelf
as she floated in the shallow end of the pool; didn’t see
my mother’s fingers later that same day, fat as Vienna sausages,
offering Jay a little grey hot dog at the Red Sox spring training camp;
never saw my mother’s toes as they squeezed
into the plastic sandals she insisted on buying at Kmart
in order to save money for the trips to Ft. Myers.
Attentive as she was to the donor sticker on my mother’s
driver’s license, the nurse didn’t think liver, kidney; she certainly
didn’t think heart. As she surveyed the body free of needle pricks,
surgical scars, amputations, bruises, and every other mark
of long-term illness, she thought skin, so easily flayed
from the body, a drape that, once released, could hang
on anyone, anywhere, perhaps in bits, perhaps in whole parts,
no longer Queen Bee, mother, wife, no longer
a tightened knot, aorta’s squeeze, fallen chambers
of the heart, the stopped rush of blood in the veins.
Now just epidermis: expansive, generous, promiscuous,
so capable of protecting the body of another.

Note: The first quote in “The Watch List” is the epigraph from Salman Rushdie’s Midnight’s Children. The second quote comes from Tony Kushner’s Angels in America: Millenium Approaches.

“Archaeology,” “The Watch List,” and “The Nurse” first appeared in My Favorite Tyrants published by the University of Wisconsin Press.

Joanne Diaz is the recipient of fellowships from the Illinois Arts Council and the National Endowment for the Arts. She is the author of My Favorite Tyrants (Winner of the Brittingham Prize, University of Wisconsin Press ) and The Lessons (Silverfish Review Press). She teaches in the English Department at Illinois Wesleyan University.