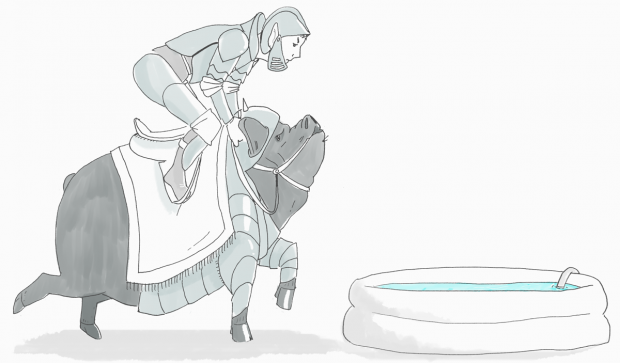 Pitiful humans compelled
by some wrinkled force
to figure who they might be,
skidding through all sorts of trials:

plummeting from skyscrapers
to find their own solid source,
studying the habits of muzhiks,
learning not to live for the belly.

One foozles golf balls into the ocean
and waits for signs to appear.

Another argued this evening
while widening his drug hole
that he knew exactly
what he used to be: an elf
who would do anything

for a belly rub,
which included wearing
a coat of armor
while riding a pig
into the swimming pool.

Of course, all trails lead to hassle
and misadventure. Doors
from which you cannot remember.
One enters where
one enters—an attic, lit on yew berries,
with spots and no memory to warn the living.

I ask myself to keep an injured eye,
to only digest the wholesome chunks;
avoid the milky lumps inside the sour soup.

As if such punishment would lend to some proof
of the Supreme Dauphin, He who to I am lost;
a line of such soft ecstasy such as “In sooth,

the bowling ball doth drive most steadily
while in the gutter of the lane.
I shall not explain.”

The minister’s glass becomes a drain
clogged with the lost who will be found,
sure enough in a groove, pissing in the rain.