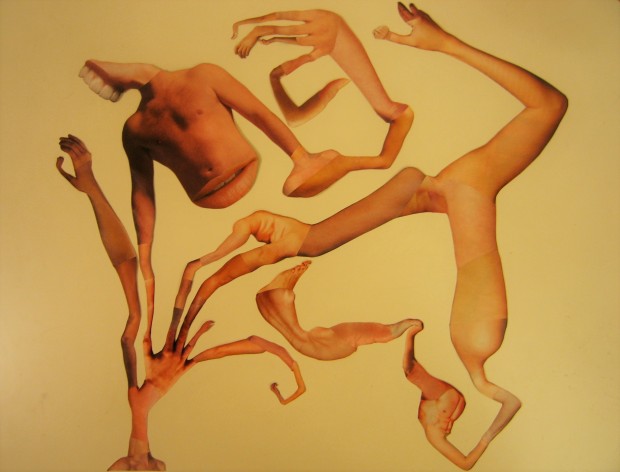 We All Fall Apart

“She stood up and left me there, covered in my own gore and staring at what I once considered a very vital piece of human anatomy floating in my bowl of French onion soup. It was May 3, 2019.”

The first time I knew I had a real problem came shortly after my rib cage snapped open and my heart crawled out of my chest. Just a geyser of blood and then plop, a human heart splashing into a bowl of soup. Surprisingly, I felt fine during the whole thing. No one nearby even paid me much attention.

It all began in a Panera Bread, where my wife of two years informed me that she wanted a divorce. I told her that she could go to hell, and a moment later the old ticker decided to vacate the mythoracic cavity. I screamed for help. She told me to quit being such a baby. Then she stood up and left me there, covered in my own gore and staring at what I once considered a very vital piece of human anatomy floating in my bowl of French onion soup. It was May 3, 2019. I was twenty-nine years old.

I assumed I had succumbed to some new and interesting form of madness. I drove myself to a psych ward the day after the incident, but as I sat in the room surrounded by people scratching at invisible ants under their skin, I decided I couldn’t justify complaining about a missing piece I didn’t even really miss. These people obviously needed help. I wasn’t sure I really did. When the receptionist called my name, I simply lowered my head and waited for her to move on down the list. Then I slunk out of the office. My eye fell out of my skull later that day.

I once read that people tend to keenly remember all the details surrounding major events in their lives. My grandfather told me how he was sitting on a rickety barstool next to an old vagabond when the news of Kennedy’s assassination broke. My father told me when the Twin Towers fell, he was hiding from his boss in the bathroom of the stale office building where he worked. Maybe one day I’ll tell my descendants about the day I started to lose myself.

I’ve slowly fallen apart every day since. The long months turned to longer years, and pieces kept dropping as the clock kept ticking. It happened often enough that my initial feelings of dread subtly eroded into a sort of absent-minded acceptance. I didn’t consider this shift in outlook a good thing. To combat my creeping indifference, I developed a system specifically aimed at keeping myself mindful of just what I was losing. I started gathering the superfluous parts, putting them in labeled jars, and placing them on a shelf in my cellar. A catalogue of what I’ve lost.

A whole pickled lifetime sat on those feeble shelves, their combined weight nearly ripping the screws loose. Reminds me of something my old shop teacher once said: no matter how sturdy the foundation, it can only bear so heavy a load. Or something. I never really paid attention.

Regardless of my meticulous record keeping, that emotional gut-punch of recollection still eludes me when I muse over my jarred collection. The memories remain, but feel far removed. A fever dream of another person from another time. But even with the apathy, I can only stand to look at them for so long. Thinking about it all at once makes my head hurt.

August 19, 2019. Jar of Fingernails. I talked my parents out of visiting me after I lost my heart and my wife. They kept emphasizing how much they wanted to make sure I was doing alright, let me know they cared. I fabricated some work commitment that conflicted with their visit. Some nonsense about deadlines. When I got off the phone, my nails, in their entirety, popped from my fingers like caps from shaken beer bottles. I swear, one flew a good twenty feet across my living room. They’ve never grown back.

April 3, 2021. Lung. Coughed that bad boy up the day I cancelled my annual hiking trip out west. I normally went once a year to clear my head, take in the sites, so on and so forth. A marijuana-smoking hippy once told me those hikes would lead me toward a deeper understanding of the void. At nineteen, his words seemed profound. Now I’m pretty sure it was just the pot.

June 22, 2022. Right Hand. For the sake of accuracy, my entire hand didn’t fall off. Just the skin and muscle. I didn’t even notice until I almost slipped on the mess walking to the bathroom at three in the morning. The flesh just quietly sloughed off. Earlier that day, I’d tossed an invitation to an old friend’s wedding in the trash. As kids we were inseparable, but time and distance pulled us apart. Plus, they chose to have the ceremony in Pittsburgh. I hate Pittsburgh. I hate it more than my ex-wife and Panera Bread and French onion soup combined.

Not a single person I’ve ever met comments on how much of me has gone by the wayside. I get none of the looks usually thrown at the grotesque. No quick glances followed by averted eyes. No subtle grimaces. Nothing. Best I can figure, every person on the planet either possesses the talents of a master thespian or genuinely doesn’t see that I lack the pieces necessary to call someone whole. I don’t mind.

I’ve endured thirty-some bizarre years of this. The time to give a damn about it has long passed. I just keep putting what I lose in the jars and hiding them in the cellar. The shelf collapsed years ago. Now all the jars lie in stacks in the corner, covered in dust and spider’s webs. I hate spiders.

Once, in a moment of supreme weakness, I ventured back into the cellar, cracked open all of the jars and attempted to jam every piece back into its rightful place. Now the idea seems stupid and desperate. There I was, well past middle age, trying to take a lifetime-worth of decay and reverse the effects in one epic moment.

I wedged the old, shriveled heart back under my sternum. Coated the lost fingernails with rubber cement and slapped them on the ends of my digits. Slid on the lost flesh on my hand like a glove, and secured it at the wrist with staples. For a second I thought I had it, if I just concentrated hard enough and didn’t make any sudden movements I might be right back where I started.

Nothing held. Those parts of me were gone for good. Maybe if I had worked them back into place earlier, they would’ve taken root again. Maybe not.

I snatched up a broom, swept every piece into a massive ball, and pushed it as far back into the cellar as I could. There weren’t any more labels or clear distinctions between parts. Just decades of mess, all jumbled and festering. I didn’t even want to know where one part ended and the next began. I smashed the light in the cellar with the broom handle, and when I got back upstairs, I nailed the basement door shut.

Now, haunted by all I’ve lost, I’ve mustered up enough courage to do to my doctor and tell him about my troubles. Sitting in his too-white exam room, I tell of my awful depth-perception and rickety hand and everything else. I tell of how I can’t get out of bed in the morning without feeling lightheaded. How I am nauseated when I look at the shambles of myself in the mirror. I went on tangents about hippies and Pittsburgh and French onion soup. I talked and I talked and I talked. When I finished, he took a deep breath and in his calmest, most understanding voice told me not to worry. Told me that I should get a check-up, but that these things happened to people all the time. That everybody loses a little something along the way. That we all fall apart.

He told me to join the club.

Corey Skatula lives in Colorado with his wonderful wife and two idiotic dogs.