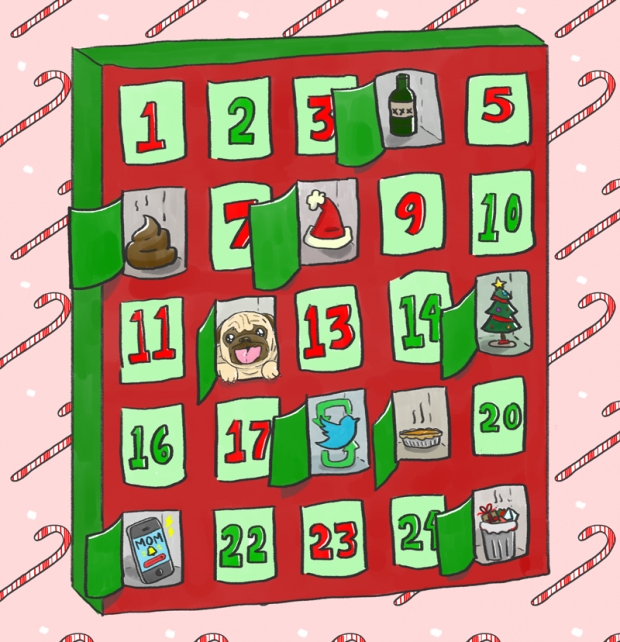 An Advent Calendar of Millennial Ennui

She invites her girlfriends over to watch White Christmas. They drink Yellow Tail Shiraz and huddle under blankets like rainy-day shoppers beneath awnings.

Dad leaves a voicemail asking if she’s settled on dates for Nebraska. Her step-niece is growing so quickly, and babies aren’t babies forever, you know.

No, nobody turned in a lost iPhone. He orders a whiskey soda and chews on the indignity of asking his parents for a new one.

The letter is from her college alumni association. She slides the envelope into the garbage without opening it.

He realizes the highlight of his day was two retweets and a favorite.

That’s right, motherfuckers. He baked a pumpkin pie. Not from scratch. But still.

A bulldog shits on the floor. His owner forgot to walk him because he was too busy composing an unsolicited rebuttal to a Gawker post.

An editorial assistant avoids eye contact with her account balance and wonders if 28 is too late for law school.

A first-year law student remembers his stint as the bassist for Brunch Davidian and wonders if $30,000 in debt is too late to drop out & tend bar.

A bartender wonders: Who are all these people getting drunk on a Tuesday?

She scans the Pitchfork Top 100, exhaling with each shimmer of recognition.

Wearing a Santa hat to work really does make her feel a little better.

A writer in Brooklyn identifies with Llewyn Davis and tells no one.

With halting keystrokes, he divulges his AmEx number to Etsy. $70 seems steep for a Grinch cardigan, but a party theme is a party theme.

The ability to stream Christmas movies from Netflix has, in itself, justified buying an Xbox.

They keep meaning to buy a tree, but honestly, they’re all going home for Christmas. All except Noah, and Noah’s usually at his girlfriend’s place anyway.

“Paulie can’t wait for you to get home!” Mom texts. She attaches a picture of a pug, its face like a Cinnabon with an unretractable tongue.

She curls up underneath her comforter and rubs her feet together—left-on-top-right-on-top—until the need to pee ruins the moment.

Mariah Carey fills the apartment and everybody squeals and sings and lets their smiling eyes linger on everyone else’s. He joins in because he’s a good sport, but he’d feel less gawky after a couple more beers.

She butters an English muffin and reminds herself that the days will only get longer from here.

Uncle Patrick reveals that the keys to gainful employment are 1) pounding the pavement, 2) pressing the flesh, and 3) keeping some irons in the fire.

He tries to remember why the hinged kneelers at St. John Neumann used to seem so exciting.

“Do you think the potato casserole would go bad?” Mom asks through the static. “Overnight mail really isn’t that expensive.”