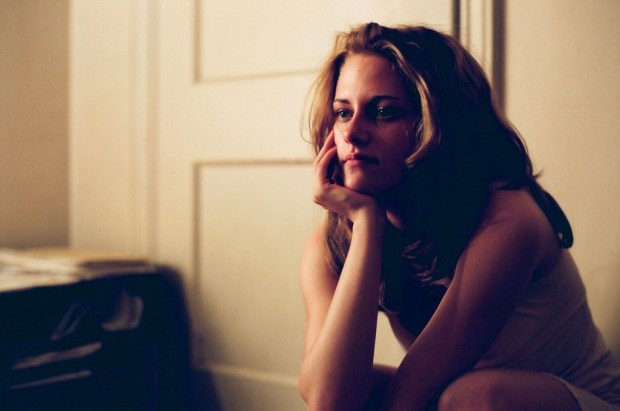 K-Stew, Kerouac, and the poetic identities of 23 year olds.

In Twilight: New Moon, Kristen Stewart and Robert Pattinson sit in the back as their high school English class watches a black and white ﬁlm version of Romeo & Juliet. The students sit eyes glazed, heads in hands. The teacher calls on Pattinson to repeat the last few lines of iambic pentameter, to prove he was paying attention. Violins swell, the camera moves up the aisle, ever closer to Pattinson’s face as he recites:

O, here
Will I set up my everlasting rest,
And shake the yoke of inauspicious stars
From this world-wearied ﬂesh. Eyes, look your last!
Arms, take your last embrace! and, lips, O you
The doors of breath, seal with a righteous kiss
A dateless bargain to engrossing death!

To many fans and detractors of Kristen Stewart, this is what poetry is.


What I knew about her before she published a poem in Marie Claire: She played Bella, the protagonist of The Twilight Saga, ﬁve movies I hadn’t seen. She was romantically linked to her co-star, Pattinson. I knew this from the Internet and going to the grocery store.


Stewart is 23 and says her favorite book is On The Road. At 23, I said the same thing.


Mainstream press attacks the poem. A headline in The Independent: “Kristen Stewart Writes Worst Poem of All Time.”


Marina Hyde of The Guardian: “Yup, it reads like a middle-class fridge door.”


In 2013, following a break-up with Pattinson due to a ﬂing with Rupert Sanders, Stewart’s director on the ﬁlm Snow White and the Huntsman, she road tripped through the Southwest, escaping, writing poetry.


In 2006, my friend Gary and I ﬂew from New York to his grandparents’ vacant one bedroom condoin Las Vegas. We drove their minivan around Nevada, Utah, Arizona, California, and Mexico for six weeks, sleeping in the van.


Watching the ﬁlm version of On The Road, in which Stewart plays Marylou, I ﬁnd it hard to watch someone else play Sal Paradise. I played Sal for years. Before I walked into a room, I would, like an actor, take a moment to remind myself to think and behave as Sal would. A rotating cast of Carlos and Deans and Marylous circled around me, chasing an approximation.


Critic Hilton Als says, “Acting has come to this: engaging less in make-believe than in making a bad carbon copy of reality.”


The Marie Claire interviewer asks Stewart about upcoming roles. More blockbusters? Go indie? She replies, “I want people to watch me ﬁnd something.”

…Your nature perforated the abrasive organ pumps
Spray painted everything known to man,
Stream rushed through and all out into
Something whilst the crackling stare down sun snuck
Through our windows boarded up
He hit your ﬂint face and it sparked.
And I bellowed and you parked
We reached Marfa.
One honest day up on this freedom pole
Devils not done digging
He’s speaking in tongues all along the pan handle…


Many horror purists accused The Twilight Saga of not adhering to traditional vampire rules. When a vampire is exposed to sunlight, it’s struck blind and/or UV rays sear its ﬂesh. In Twilight, the sun makes Pattinson’s chest glitter “like diamonds.” They deemed his vampire trivial, inauthentic. There was an established illusion, and no reason to create a new one.


Stewart and her role are inextricable. The Independent article accuses her of “doing anything she can to escape the brooding monotony of Twilight.” There are no other roles for her to play.


Is she playing her own version of Sal or Marylou in the poem? I can’t say. I don’t know her.


Years ago, my friend Cecile from Belgium was interning for The Wooster Group and wanted to stage something of her own. We wrote a script: she directed, and I played Cecile, or a character based on Cecile, and delivered a monologue about her father, a heroin addict. I never played it well. My dad was present, loving, still with my mom. When Cecile left, she invited me to Brussels to road trip. I didn’t go, but wrote a poem as if I had, a drive from Brussels to Southern Spain that never happened. I cast myself as Sal, the brooding young man, and Cecile as a female who needed a vampire.

Gloria and I board this van, fenders orange
hood and doors vacillate royal or sky blue. She tells me
her father’s on a street somewhere

a kilometer from her house: afraid
she’ll see him, he’ll ask
her for a coin, not recognize her,

she couldn’t take that. That would be it
for her. I ﬂew here because
she wanted to sell her bags

doily frills denim. Her call, ‘You can drive, no?’
I can’t stop moving. We come to towns by
morning sun, fold out the table she speaks

to the ladies, I sit, her nylon string guitar
in my lap, marjoram dries
on the dash. Evenings we lie in the van,

sweat bleaches our feet. My father
has a big wide bed in an empty room
uncreased sheets an ocean from here but as I
piss in the dirt back resting on the van I want Gloria’s father.


Hilton Als writes, “That’s the part about acting that always confused me: my intention. I have never had one, other than to be an actress.”


Sal is complicit in the action, but always a spectator, feeding off the candor and audacity of Dean. Sal catalogs, he is along for the ride.


Stewart, when asked to comment on this media blitz: “I stand by every mistake I’ve ever made, so judge away.”


I meet with one of my students. He says he never got into poetry, except for the time his girlfriend told him all about Sylvia Plath, her biography recasting each wave of syntax as a stage for the character, the celebrity.