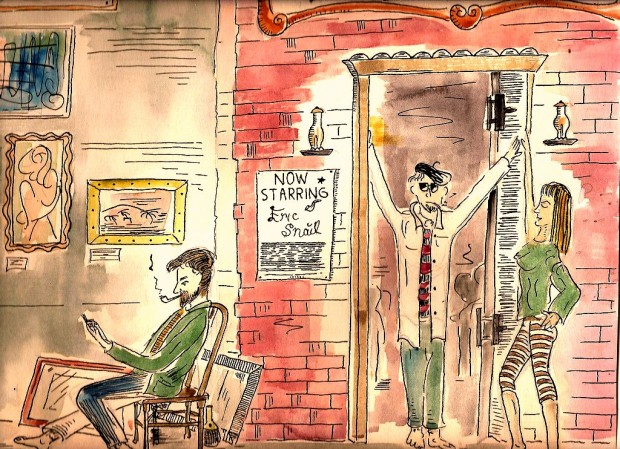 A rhythm. A generation. A showdown in the streets.

1.
Have you ever gotten in a fight?

2.
The reason I’m asking is so I can tell you that the closest I’ve come to getting in a fight was when I once kicked a guy in the shin. In hindsight, kicking him in the shin was a bad idea, but in my defense, I was young and quite intoxicated and had just gotten tossed out of a bar because a friend had been throwing up in the bathroom. She had been taking oatmeal cookie shots.

4.
No wonder she was throwing up.

5.
Anyway, that guy I kicked in the shin: He was a friend of my barfing friend. I say it was a bad idea for me to kick him (aside from the obvious violence of kicking) because he towered over me. When I think about him now, I imagine that he was twice my height, though that can’t be right: I am 5’6’’. He seemed like a giant though. The other reason it was a bad idea is that he had a temper and I didn’t trust him.

Fortunately, he did not strike back. I was nowhere close to beating him, up or otherwise.

After I kicked him, I started crying, and my barfing friend hugged me, and then I cried some more. I wasn’t sad but I was angry and frustrated and drunk. When I was that age, in my early 20s, I used to say that it wasn’t a party until someone cried. That was the first time I’d been the one crying.

7.
Things I have beaten: eggs, Bowser in Super Mario Bros., various cookie and cake batters, other people at board games (I am particularly good at Trivial Pursuit), my husband at Scrabble (though he wins more than I do), my grandmother at Gin Rummy (though I now suspect she used to let me win).

“I have this disease,” a woman told me. She’d been recently diagnosed. “It won’t kill me. It more, I guess, dictates the course of my life.”

“One of the things the disease makes you do is name your child Tammy,” she said. “And do you know what my oldest daughter’s name is?”

“Tammy Jean,” she said. She laughed. “Can you beat that?”

Of course, I could not.

12.
I haven’t ever read On the Road though I have two copies. I don’t know where either of them came from.

13.
I have beaten myself up, idiomatically speaking, for something I said or didn’t say or did or didn’t do, for things so far in the past that who even cares anymore. Except me. Have you? Beaten yourself up, I mean? It would make me feel better to know that you beat yourself up, that I’m not alone. We both know it’s not good for us to do that. We can help each other.

“Don’t beat yourself up,” I’ll tell you. Maybe you can tell me that, too.

Leslie Maxwell is a graduate of the MFA program in creative writing at George Mason University in Virginia. Her writing has appeared in The Fourth River and decomP magazinE, among other publications. She lives in Durham, N.C., where she teaches college composition and literature. Find her online at www.lesliemaxwell.com .