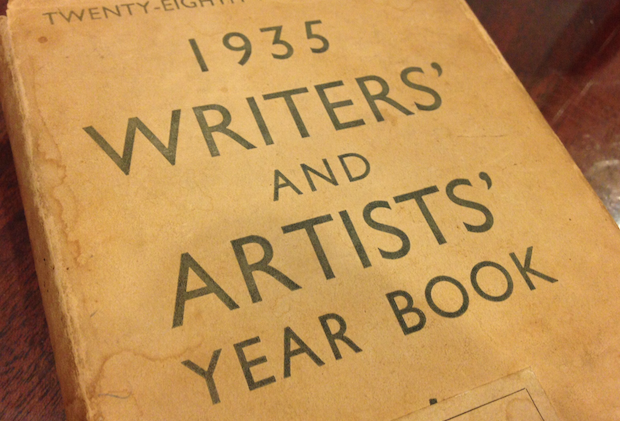 Choice Excerpts from the 1935 Writers’ and Artists’ Year Book

I found the 1935 Writers’ and Artists’ Year Book on the shelf of an antique store in Phoenicia, New York. As far as I’m concerned, it was a steal at $8. Like a newspaper, the Year Book is designed as a fleeting tool, meant to be discarded as later editions render it obsolete. The team that assembled its lists of journals and agents, that provided advice on libel law and sketched out the market conditions for different genres–they weren’t doing so for posterity, for us. They were working for the writers and artists of 1935, and the resulting take on that year’s publishing industry is as unselfconscious and perfectly preserved as the proverbial fly in amber. I’ve pulled out some of the choicest, funniest, and most revealing bits to share below.

“It is generally assumed that the market for poetry yields no profits; and, so far as the publishing world is concerned, this is largely true.”

~From “The Market for Poetry”

“Pictures of prominent people, or ephemeral mediocrities, and of places, form another group of much used material.”

~From “Photography for the Press”

Dead people live for this

“A better way of perpetuating the memory of anyone dear to us than by founding a named literary prize has yet to be devised, and it is curious that few such prizes exist.”

Maybe you’ve heard of them

Atlantic Monthly – “Work must be authoritative in manner, not necessarily American, and of distinction in form and style.”

Life – “Buys sketches, squibs, short humorous stories, and cartoons, articles of a brief and brilliant character. … Rates: very high, 5 cents a word and up, and paid on acceptance.”

The New Yorker – “Uses satirical or humorous prose, light poetry, clever couplets, and quatrains on current affairs, pictures and picture ideas, and anecdotal material for ‘Talk of the Town’ department.”

Poetry – “Both free verse and the older forms are used, providing the work seems sincere and not imitative.”

Vogue – “A semi-monthly, illustrated publication devoted to the promotion of good taste in fashions, decorations, and other subjects of interest to the smart feminine world.”

~From “American Journals and Magazines”

A Non-Political Journal, mainly devoted to the dissemination of spiritual, idealistic, and humanitarian principles.

A symposium on what the leading minds of the Race–who have freed themselves from the shackles of orthodoxy and dogmatism–really think. The word Aryan means Noble. The Aryan Path stands for that which is noble in East and West alike.

Nobody wake them up

“In the professional theatre our master dramatists have been resting, and a good number of the most successful plays have been by comparatively unknown authors.”

~From “The Market for Plays”

Your brain on art

“Years ago an artist was recognised as knowing nothing of business or advertising affairs, and was notoriously unpractical into the bargain. The advertising artist of to-day has to have an efficient brain apart from his art work, and he is expected to do his own thinking instead of relying upon others to do it for him.”

~From “Drawing for Advertisements”

Some thoughts on book wrappers

“An art school cynic in giving counsel to those about to design posters or their smaller brethren, book wrappers, might say, ‘Study those already done, and then go and do something entirely different,’ which is really excellent advice and cannot be beaten as a philosophy of attack.”

“It is a great asset to believe that you are doing something revolutionary, for that way leads to enthusiasm and consequent vitality.”

“Publishers obviously are not all responsive to the same type of design, for their preferences have changed considerably since 1914, and the pretty girl as a cover ornament has suffered most; to-day she emphatically is not wanted.”