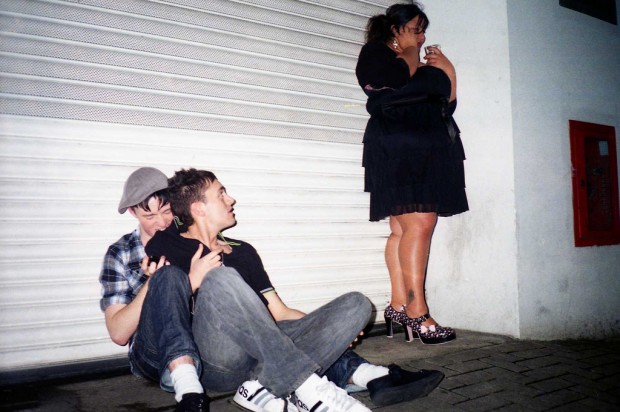 dance me to the end of night

A memory of youth on the cusp of AIDS.

Some Thursday nights, Sean and I would go to the 1270, because it was two for one beer night, and the door guy let us in without even checking our fake IDs. Downstairs the punks hung out, strung out in the dark. We’d buy drugs, and in the back room mirror, we put on eyeliner and practice jaded expressions. Fueled on bumps of coke and Rolling Rock, we shuffled in a zombie dance to Morrissey singing about the end of the world.

Up a curious flight of stairs, where furtive glances from strangers and groping occurred, the main bar was a sudden explosion of amphetamine brightness, blasted by the last dying beats of disco. The whiff of poppers made us dizzy as we twirled under a spinning mirror ball, a pack of jackal children, wild when they played that new song. “You must be my lucky star,” we’d scream, with our hands waving in the air. Sweat streamed down our faces until we cried black tears.

Eventually we’d come up sputtering for air, climb to the roof, gasping in the moonlit night sky. Lolly was in her corner, mixing drinks like an alchemist. She served up gasoline gold nectar we’d suck down until the lights flickered last call.

The club emptied out at two, and the sidewalk would be crowded with whooping drunken kids. Like lemmings we followed the flow down Boylston toward the Victory Gardens.

In the Fens, the unafraid took the darker, unlit paths. Eyes called out from the muddy reeds, where pagan boys played hide and seek and other, more dangerous games. From tall grasses, insects still sang as though summer would never end, despite a chill that crept in with the damp of the sighing swamp, and leaves that fell down like rain.

We’d sit on the picnic table under a rose trellis, Sean and I, sharing cigarettes and talking, laughing about nothing, huddled together shoulder to shoulder. Once, maybe twice, we kissed, while just outside the park, sirens and city life pulsed.

Night would wear on, until the cold gray light of another  dawn.  We dragged ourselves home in dirty soaked sneakers, silent, smoking, listening to birds rouse in the trees. We were stoned and happy, yearning for the little death of sleep, neither of us knowing then

we would never again be so young,

Norman Belanger is a nurse by day and scribbler of short stories by night. He lives in Cambridge, Massachusetts. Coming of age as a gay man at the advent of AIDS, he shares this story as a remembrance of that time, and the people we lost too soon.