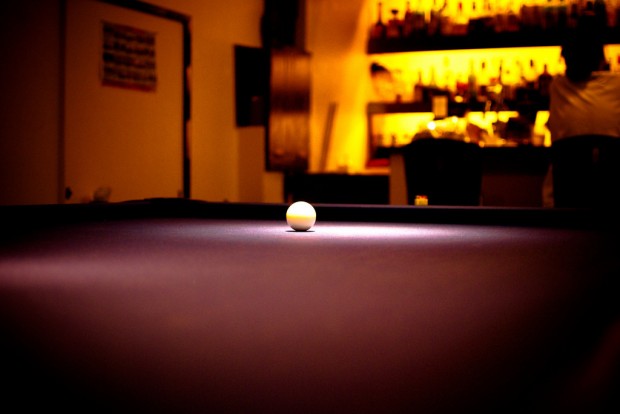 How Not to Play Pool

“My pedagogical disagreements with bartenders are a source of never-ending grief for me.”

I go to The District and have a Jack and Diet and sit at one of the wobbly cocktail tables next to the pool table where the girl I used to be friends with and the girl I’m still sort of friends with are playing with their respective men-friends. My drink is mostly ice and then mostly booze which is exactly opposite of the way I like it: I want mostly cola and some booze and a little ice and my pedagogical disagreements with bartenders are a source of never-ending grief for me. I am watching this game and drinking my drink and though I am here at The District because they invited me, they do not invite me to play pool. At some point the man-friend of the girl I used to be friends with scratches and the cue ball disappears into the maze void of the under-pool-table and the girl I used to be friends with sticks her arm into the dark opening of the ball return. She does this three times and the third time her arm gets stuck. Her man-friend tries to help her and she hollers, “Ow, ow ow ow,” and he has to shove her against the pool table to get the right angle and her knees slide under the pool table and her neck is all cricked back. I drink my drink. Her arm comes free, and she rubs it. Still there is no cue ball. The men-friends recruit some other women’s men-friends from the adjacent game and try to lift the table to shake free the cue ball, but the pool table is about a thousand pounds and they barely get any lift at all. For a second I can see the ground under where one of the legs was. While they are failing to shake the pool table I catch a glimpse of moonlight from the dark opening of the ball return. I drink my drink and then I put it down and mosey on down to the pool table and put my hand in and grab the moonlight and give them their cue ball back, and then I finish my drink and I pay my tab and then I leave. This is exactly why she is the girl who used to be my friend, and not the girl who still is.

Hilary Gan currently resides in Los Angeles, where she works with schoolchildren and dinosaurs. She received an MFA in fiction from the University of Arizona, and her work has previously appeared in Jersey Devil Press, Belletrist Coterie, The Fiddleback, and Petrichor Review. Her favorite things include dirty blues music, fluffy kittens, and egomaniacs.