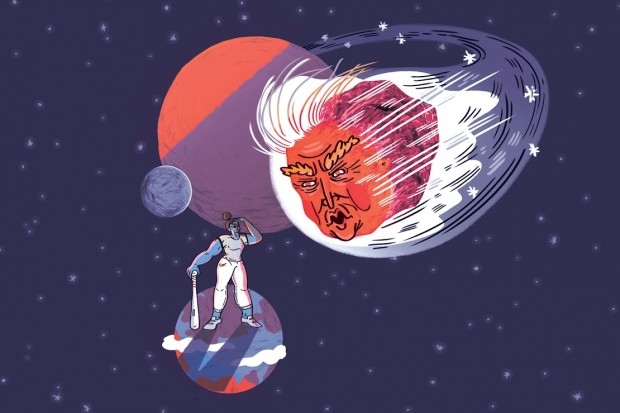 But the fight has only just begun.

Do you feel that? That despair? That rage? That dread?

I feel it. And as much as it hurts, I don’t want the sting to go away. The news networks had barely called Pennsylvania for that hate clown in a power tie before prominent voices started talking about the “healing process” and “reconciliation.” There can be no healing, no reconciliation. Not when “healing” means polite acceptance. Not when the president-elect ran a campaign predicated on the dehumanization of so many. We cannot allow the results of the election to ever feel acceptable. Life will not go back to normal.

Recriminations are already flying in left/liberal circles. Blunt honesty is important now. We have to understand what happened so that we can learn from it and do better. But it’s also important not to become so invested in sectarian squabbling that we foreclose the possibility of working together in the dark years to come. The threat that the coming presidency poses is historic, and, disagree as we might, socialists, liberals, moderates, and other anti-Trumpists will need to find it in ourselves to come together as a coalition that can effectively resist the revanchist authoritarianism that is likely in store. History will judge us harshly if we’re so busy owning each other on Twitter that we lose sight of the greater enemy.

This much is now clear: The establishment has failed, and the center did not hold. Hillary Clinton represented what the power class of the Democratic Party perceived as a “safe” candidate. Tim Kaine was the “safe” VP pick. The central thrust of their campaign was that they represented a “safe” choice in contrast to “Dangerous Donald.”

We now know that is there is no longer a way to “play it safe.” In terms of strategy, tactics, and leadership, the only choice left is boldness. Trump and the Republicans that enabled him must be fought tooth and nail, in the streets and in the legislature. This means obstruction. This means protest. This means a total war on all fronts—political, social, cultural. There can be no “coming together” with this regime. There can be no search for the “common ground” that the establishment valorizes, some mysterious place further right that is never found. We should not “give him a chance” or “wait and see.” We have already seen. He spent his entire campaign detailing his contempt not only for our values, but for entire swaths of humanity.

At the same time, we can’t let this anger serve only as catharsis. We must articulate our beliefs in a way that can appeal to some of those who supported Trump while simultaneously maintaining our bedrock rejection of racism, sexism, homophobia, transphobia, ableism, and every other flavor of hate this campaign stirred up. This will be trying. These are, after all, people for whom the grotesqueries of the president-to-be were appealing, or at the very least not disqualifying. However, the results of the election demonstrate that such work is a political necessity. To people whose frustration with the status quo meant that they were willing to risk Trump just to shake things up, who believed that a zero-sum race war explained their condition, we need to present a compelling alternate narrative. To a country that has lost all hope of common progress, we need to present a positive vision.

Some would have us think that this is white supremacy’s last gasp, and that it’s only a matter of time before a rising progressive generation and changing demographics will wash away all that’s ugly. But people have been saying this for years. Baby boomers once thought of themselves as harbingers of the Age of Aquarius, and, lo and behold, they brought us the Age of Trump. We have to work with the electorate that we have, not await one that we assume will be better for us.  Trump voters who are convertible must be converted. Some of them can be converted—just look at the districts in the industrial Midwest that went to Trump after breaking twice for a black man. But that won’t be done by patting them on the head and assuring them that everything is actually all right. It won’t be done through sneering condescension and self-congratulation for already having the right beliefs. Walking this knife’s edge of reaching out without compromising will require a new language of empathy and conviction. If it can be done at all, it will be done by acknowledging legitimate suffering and directing the existing anger at targets that deserve it.

At Blunderbuss, we are committed to serving the movement that is to come. This magazine has always had politics, but our print issue marks a pivot toward a more explicitly political orientation. In the months and years to come, expect us to double down on that commitment. Literature and art are beautiful, important things, but they are not enough. As writers and artists, we can’t be fooled into thinking our political and social obligations are fulfilled by simply practicing our craft. Kurt Vonnegut put it mordantly: “During the Vietnam War, which lasted longer than any war we’ve ever been in—and which we lost—every respectable artist in this country was against the war. It was like a laser beam. We were all aimed in the same direction. The power of this weapon turns out to be that of a custard pie dropped from a step ladder six feet high.” And in our own publication, Isaac Butler has pointed to the tenuous connection between art and democracy. “If art strengthens democracy, or makes us better citizens,” he argues, “it is only by accident, a side effect of this need, this hunger we have to transmute the world through a mysterious alchemy from the base metals of sensory experience into something strange, indescribable, more alive than life itself.”

Blunderbuss will not abandon our practice of this mysterious alchemy—the hope and insight that art can provide will help us to endure. But we also pledge to become better activists, to serve as a venue for reportage and analysis, to more closely align ourselves with activist networks, and to constantly seek out ways in which our small magazine can be useful as this horror show begins to play out.

Catch your breath, then summon the strength to get up off that mat. This fight needs all of us.