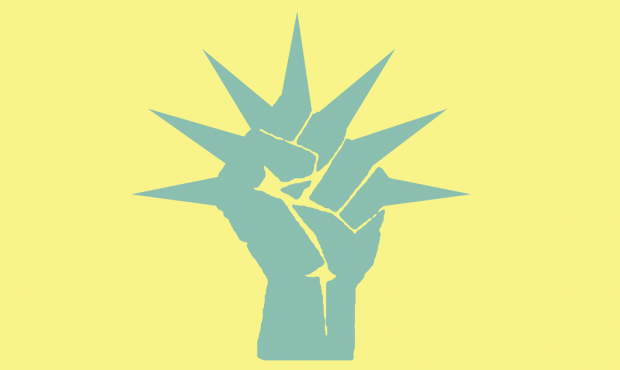 A weekly guide to action.

The times may be dark, but they’re not hopeless. We have the power to join together and fight back. Now more than ever, we need to shore up our bonds of community, activate our networks, and make our voices heard. To this end, Blunderbuss will begin compiling a weekly roundup of events in our hometown of New York City that offer a chance to push back against the rising tide of hate and authoritarianism. Don’t expect this list to be exhaustive – this city is too full of energy and activism for us to be on top of everything. But if you’ve got an event you’d like to see listed, feel free to hit up Travis at tmushett@gmail.com. All descriptions are authored by event organizers unless otherwise noted.

The ninth in a series of film screenings, dinners and discussions happening every Friday evening through December 17th at Decolonize This Place. This week Colloquium for Popular Culture and MTL + present Punishment Park (1971).

In this fictional documentary, U.S. prisons are at capacity, and President Nixon declares a state of emergency. All new prisoners, most of whom are connected to the antiwar movement, are now given the choice of jail time or spending three days in Punishment Park, where they will be hunted for sport by federal authorities. The prisoners invariably choose the latter option, but learn that, between the desert heat and the brutal police officers, their chances of survival are slim.

El Salón writes in regards to this Friday:

More than ever we stand by the mission of these potlucks and conversations at El Salón. These dinners are loosely curated and welcome emerging and working artists of color to present on their practices in an open and safe platform which aims to contextualize socio-political systems, materiality, and cultural exchange.

Decolonize This Place has extended our network, our conversations, and has magnified our agency as organizers, artists, and activists.

Again, we encourage you to bring food, drinks, and friends!

If you’d like to take the stage to speak about a current project, please send us some info via e-mail so we can anticipate your presentation needs.

We are honored to be part of the series of actions and conversations for Decolonize This Place.

Check the calendar for WEEKLY UPDATES & EVENTS on Decolonize This Place.

Designed as an action-oriented space, Decolonize This Place will challenge the dynamics of white supremacy and colonial dispossession that continue to underlie the landscape of the art system–and the world at large.  #DecolonizeThisPlace

It’s time to start protesting specific issues that we can change. Donald would like to appoint Steve Bannon, a known racist, anti-semite demagogue, as one of his chief advisors. Even as Trump urges his followers not to commit acts of violence, he goes and appoints a known racist agitator.

We need to put an end to this before it becomes official. Steve Bannon has got to go. He has no place in the America we believe in.

We’ll hear from a few speakers, and depending on how many people are present, we’ll march uptown.

November 20, 2016 will mark 2 years since our brother Akai Gurley was murdered by former NYPD officer Peter Liang, in the Pink Houses. November 20th will also mark 2 years that we having fighting for justice for Akai! And what has happened along this journey has been extraordinary!

We have built relationships with fighters of all backgrounds, from all cities. We have worked with ally organizations, ally spaces and political figures. We have worked with police brutality families, families who we equally fight for. We have most importantly, brought empowerment to each other and Akai’s family, through this struggle. We will continue to fight for Akai but let us, on November 19th, celebrate what we have done in solidarity and love with one another!

The program will include speakers from police brutality family members, Akai’s family and allied organizations.

Dress in what makes you feel best! Dinner will start at 6PM sharp. See you there!

The news of the last week has left many shell shocked at the outright acceptance of racism and bigotry in the mainstream american public. The news is disheartening, but it is certainly not time to despair.

What a Trump presidency proves is that a substantial portion of the voters in this country not only accept racism, bigotry, and misogyny, but also that the governing institutions in america are to be organized explicitly along those lines. It is no coincidence that the KKK is celebrating this election with public marches.

We have a unique opportunity at this juncture: to make a break with racist and hegemonic mentality of the state structure and form grassroots organs for self-governance and self defense.

We call this emergency meeting to reach out to all those to refuse to live in the world Trump is proposing and are committed to liberation.

There will be a short presentation and break out groups to get involved in specific projects.

This is a rally/march to oppose Trumpism and all the policies of hate that it will mean for everyday Americans. All are welcome to this event.

***THIS WILL BE A PEACEFULL RALLY/PROTEST/MARCH***

We will meet in Washington Square Park and let people speak about why they oppose Trump and his agenda, all parties welcome, before marching toward Trump Tower or possibly other sites in the city to show the world we will not let Trump represent or speak for us. Trump is not our voice and does not represent the best of America. His campaign’s hateful rhetoric does not speak for us.

Trump does not have a mandate, he lost the popular vote and we will reject the hateful parts of his agenda that involve deporting millions of people and allowing for discrimiantion against all marginalized peoples.

Trumpism must be stopped and we must show solidarity against hate. But we must channel our anger against our President-Elect into change and resistance.

Besides using your right to protest, organize to resist, join resistant organizations, and join the boycott against Trump and those who have fueled him at https://www.thedjtr.com/ and The Injustice Boycott which starts December 5th. http://www.injusticeboycott.com/

Say it loud, say it clear:

If Trump’s people – Bannon, Danon, Adelson – came to your town, what would you do?

This Sunday, November 20, you will have the chance to find out, as the anti-Semitic, Islamophobic, white supremacist Alt Right is embraced by the “Jewish” Right.

Join Muslim-Jewish Anti-Fascist Action – a new network of Muslim and Jewish activists, agitators, and educators – as we shut down Steven Bannon, former editor of Breitbart and Chief Strategist for Donald Trump, who will be speaking at the Zionist Organization of America.

We will fight the fascists and, side by side, we will defeat them.

We are calling for an Art Action Assembly at Decolonize This Place at 6pm on Sunday, November 20th. This assembly will bring together artists, organizers and activists citywide to connect, mobilize, and escalate.

For some, the election of Trump has been a shocking wake-up call. For others, this represents the consolidation of structural forces that grassroots movements have long been working to combat, from Black Lives Matter to Standing Rock to the Anti-ICE campaigns. This work has been led by people of color, and this must remain true of mobilizations against Trump––this event will center queer, trans, black, brown, Palestinian, immigrant, Indigenous and global perspectives.

Artists have come out over the past week, joining marches, walkouts, and the emerging campus sanctuary movement. Now is the time to act together. In the process, we must rethink the role of our cultural institutions, whether as infrastructures of organizing or, if necessary, as targets of intervention in their own right. Join us this Sunday.

Many of us are experiencing an external reality that feels less and less real every day, yet we also understand how urgently we need to transcend these cognitive dissonances to — first and foremost —protect the lives of those most immediately at risk and then — secondly — halt the rapid consumption/destruction of the home we 7 billion humans share with innumerable other beings.

In an effort to begin to understand the origins of this #surrealbutsoreal situation we have thus far allowed, Adjua Gargi Nzinga Greaves will host a screening and discussion of Adam Curtis’ 2016 film *HyperNormalisation* (BBC) at Wendy’s Subway.

See you there, loves.

“HyperNormalisation wades through the culmination of forces that have driven this culture into mass uncertainty, confusion, spectacle and simulation. Where events keep happening that seem crazy, inexplicable and out of control—from Donald Trump to Brexit, to the War in Syria, mass immigration, extreme disparity in wealth, and increasing bomb attacks in the West—this film shows a basis to not only why these chaotic events are happening, but also why we, as well as those in power, may not understand them. We have retreated into a simplified, and often completely fake version of the world. And because it is reflected all around us, ubiquitous, we accept it as normal. This epic narrative of how we got here spans over 40 years, with an extraordinary cast of characters—the Assad dynasty, Donald Trump, Henry Kissinger, Patti Smith, early performance artists in New York, President Putin, Japanese gangsters, suicide bombers, Colonel Gaddafi and the Internet. HyperNormalisation weaves these historical narratives back together to show how today’s fake and hollow world was created and is sustained. This shows that a new kind of resistance must be imagined and actioned, as well as an unprecedented reawakening in a time where it matters like never before.”
—Adam Curtis, filmmaker

After Bernie Sanders, we need to think seriously about what it would take to form a democratic organization rooted in the working class. Join Jacobin as we celebrate the release of Issue #23 with a discussion of Seth Ackerman’s article, “A Blueprint for a New Party.”

Join us for a short discussion and then beer and smooth tunes afterwards.

Seth Ackerman is on the editorial board of Jacobin and a doctoral candidate in history at Cornell.

Nicole M. Aschoff is the managing editor at Jacobin and the author of The New Prophets of Capital.

Have you recently joined the Democratic Socialists of America but still not quite sure what they are or what they do? Maybe you have some basic questions about the concept and want to tell others, but you’re not sure how? Most people who join are not experts in Marx but we should all know the basics and get on the same page!

Despite the election results, we were always going to continue teaching the virtues of socialist ideals but it’s more important than ever that we confront the neoliberal ideology that made our current situation possible.