A weekly investigation of gender, race, and sexuality in media & entertainment.

I can’t recall a TV series with a better premise.

Masters of Sex, Showtime’s latest hour-long, Sunday night series (which premiered three Sundays ago on Sept. 29, when most of us were absorbed in the last hour of AMC’s glorious meth opera) takes on the true tale of Dr. William Masters and Virginia Johnson, who together carried out some of the preeminent biological research on human sexual response, beginning at Washington University in St. Louis in 1957. The pair ended up falling in love while working together, which gives the Masters of Sex writers a no-brainer/double-whammy of a plot structure. Masters and Johnson: partners…and partners. And they’re researching the sex—the taboo that never gets old or boring—in a decade that was horrified of sex. It’s the Hollywood Holy Grail.

This wouldn’t work if it weren’t true. And for the most part, Masters of Sex works rather well. The show has received nearly universal praise from critics. I, for one, have been a bit disappointed with the series, mostly because I don’t think it’s all that funny. Which is odd, because I usually find Lizzy Caplan (who plays Masters) brilliantly funny. You may recognize Caplan from Mean Girls (Janis Ian!!!!), Bachelorette, Cloverfield, or (my personal favorite) Party Down, among many, many other supporting roles she’s rocked since 1999, when she had a bit part in Freaks and Geeks. Yes, she is that awesome, and yes, I am very, very happy that someone finally cast her as a leading lady. (Put it this way: upon passing one of the show’s teaser posters in the NYC subway a few months ago, I halted my mad-fast subway shuffle, smiled as wide as a billboard, and made an involuntary noise that I can only describe as an awkward mashing of “awww!” and “yay!” This was so weirdly loving you would think Caplan was my child. She’s three years older than I am. Like I said, I am very happy for Lizzy Caplan.) She’s the best part of Masters of Sex, even if I think the writers have, thus far, actually underused her comic talents.

Despite Caplan, the most pressing issue I have with Masters is a Hollywood-wide issue, but the show has taken the longtime double-standard to such an extreme I find it not only annoying but truly discomforting. Put simply: Masters is full of female nudity and very little male nudity. Most of show’s female actors with a speaking role appear topless rather quickly and rather often, but given the mysterious TV-MA standards, we won’t be seeing a dick anytime soon. This is par for the course. That doesn’t make it right, or even logical. And c’mon, we got to see Peter Sarsgaard’s penis in Kinsey…

The TV parental guidelines (TV-MA, TV-14, etc.) are not necessarily something that the premium cable networks (HBO, Showtime, Cinemax) are all that worried about. The guidelines were created in late 1996, and the most “adult” rank is a TV-MA, or “Mature: This program is specifically designed to be viewed by adults and therefore may be unsuitable for children under 17.” A decade into our golden age of decidedly adult programming, pretty much anything on these premium channels will have enough suggestive dialogue, coarse language, sexual content, and/or violence to earn a “Mature” tag. I don’t notice the little black squares at all anymore, although now that I’m thinking about it, I can’t recall a time when I did.

The TV guidelines are even more trivial than the Motion Picture Association of America (MPAA) movie ratings, if only because so few theaters in the U.S. will show unrated or NC-17-rated films; those ratings do, therefore, matter to the filmmakers, and many an artistic decision has been made to avoid an NC-17 or R rating. This is very depressing and confounding, especially since the MPAA has proven itself erratic, biased, sexist, and flagrantly unethical for decades now. This is always depressing, but especially so this year, when one the best films I’ve seen, France’s Blue is the Warmest Color—which is what I’ll be writing about next week!—has been stamped with the dreaded death sentence of an NC-17. But I digress. The TV guidelines are based on the MPAA rankings…except for the NC-17 category. Here’s the breakdown: 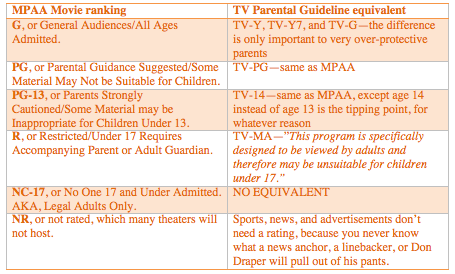 Okay, then. So why are we just seeing lots of tits on Masters of Sex? Masters and Johnson are studying the female and male genitalia. And it’s nothing we adults haven’t seen before—even the virginal adults among us, because plenty of other great shows have shown nudity below the waist. I don’t want genitals flying all over the place, but I think we’re past the point of clever camera angles, or chereographed body part placement, or carefully draped sheets, especially in a series about researchers who helped demystify the human anatomy. And it seems woefully misogynistic that with all this careful prudity down below, breasts are bursting from every brassiere up above.

I can only conclude that it’s some sort of unspoken, unofficial carryover from the arbitrary laws of the MPAA, where a full woman naked gets an R but more than three solid seconds of a flaccid penis, or even a glimpse of a throbbing erection, gets an automatic NC-17. This is not a real rule—it’s an approximate guess for filmmakers, made by other filmmakers, because the MPAA mysteriously and pointlessly refuses to outline their standards used for rating. But why is Masters of Sex conforming to it, anyway? Are the show’s creators or producers to blame? Is it Showtime? Or do audiences only want to see a vagina or a penis in their porn and a handful of art house movies? And when will we have enough male actors disrobe to fill a “We Saw Your Dick” musical number at the Academy Awards?!

Masters of Sex is a show about two things: studying the biology of sex, and a true love story seemingly scripted for Hollywood. Won’t it be awkward we have a sex scene where only Lizzy Caplan gets undressed?

Meredith Fraser is a Contributing Editor for Blunderbuss. She received her MFA in creative writing from the University of North Carolina Wilmington in 2013. She lives in Brooklyn, where she is working on her first novel. She is a blonde in real life.