Writing is misery. Thank god for the egotism and obsession that make it possible.

The air was filthy with August. It was one of those Manhattan summer days where the A/C unit in your bedroom window can’t do much for you besides whine out an electric apology for its uselessness. I shut my laptop and shuffled into the living room. Brice—the subletter I was trying and failing to hide from neighbors—looked up from his book.

“Are you okay?” he asked, appropriately concerned by the slack, dead-eyed expression I must’ve been wearing.

I nodded solemnly and walked out the door onto Morningside Drive.

I was stunned dumb. I’d spent a year and a half writing that novel, a coming-of-age story of class, war, and drug dealing in the Bush-era South. (Think Friday Night Lights meets Breaking Bad meets A People’s History, is what I like to tell people.) The grad student lifestyle had allowed me write nearly full-time in the summers, and during the academic year, I’d squirreled away whatever hours I could to work on the manuscript. I was, and am, a PhD student in communications, but literature was the ambition that predated all others. If you peeled back calluses that had built up over the years, what I hoped you’d find was Writer, Bold & Triumphant. And finally, I’d written something—something long, and something that I was proud of.

The thing was, I wasn’t finished. I was nowhere fucking close.

Last week—two years and three months after my grand triumph—I finished another draft of that same novel, my second complete reworking since I’d let myself be moved to tears by a finality that was so far from final. Dumb luck had once helped me find an agent with almost no effort on my part. She promptly left the industry, and I watched my manuscript slip through the cracks of her agency. Despite a few nibbles, I’m still unrepresented. Nobody who doesn’t know me personally has read my book. I’m about to start spamming literary agents with this fresh version of an old project, so I decided to bask (wallow?) in sentiment, pick up a new tall boy, and return to the same rock where I got weepy the last time I felt finished.

Writing a novel is an insane thing to do. Think about it: a first-time novelist will spend years working on a book without any assurances anybody will want to read it, let alone pay her actual dollars for it. Imagine that you spend four years bagging organic kale and Peruvian goat cheese at Whole Foods hoping that you’ll eventually get a paycheck, and then your manager stiffs you, pays Lena Dunham $3.5 million, and sends you a letter that says, “While we appreciate your spare, unrelenting checkout style, your use of paper bags is derivative and your treatment of butternut squash lacks nuance.” This is the gamble a writer takes in choosing to write a novel.

It’s obvious, then, that the thousands of us pouring our best years into novel-writing aren’t doing this out of some rational, economic calculation. And while we might sometimes convince ourselves that we’re devoting our lives to the service of capital-L Literature, I don’t know if that’s the case either. Yes, we believe in the transformative power of art and the beauty of articulating our subjectivities, but we’re not genuflecting to these holy abstractions when we pour our coffee every morning. What keeps us writing in the face of ridiculous odds is more likely an admixture of obsession and egotism. The obsession turns writing into a bodily function, something we believe we have to do to keep on existing, and the egotism convinces us to think whatever we shit out has meaning.

The relative proportions of these traits differ from writer to writer. Emily Dickinson, who wrote 1,800 poems but only published a dozen of them anonymously, was probably more obsessive than egotistical. Norman Mailer was up to his dick in both qualities: he had the work ethic to churn out 12 novels, 16 books of nonfiction, and 40,000 letters, and the self-regard to run for mayor of New York City.  The twin derangements of obsession and egotism are probably useful to getting ahead in most professions. There’s a reason so many sociopaths are in positions of power. But for those of us trying to break into the fiction game—or into other hyper-competitive dream professions (artists, actors, NBA power forwards, etc.)—they can be the only things that keep us working day after goddamn day. There’s no consistent paycheck or 401k to put life on cruise control, and most of the time writing is no fun at all. Sure, every once in awhile the words flow like sweet, sweet language nectar, but more often you’re trying to run triage on a sentence that trips over its own prepositions or a paragraph that’s withered by callowness.

And to put the depressing cherry on top of the miserable fucking sundae, unless you’re an established name, no one gives a shit about the misery you’re putting yourself through. As far as the world is concerned, you’re that creepy guy who spends every spare moment in the basement with his model train set. Many writers have toiled in obscurity for way longer than I have. They’ve written novel after unpublished novel, seen their mailboxes stuffed with rejection letters, and found themselves waiting tables for assholes from college whose eyes are full of pity and awkwardness. I haven’t (yet) slogged through that kind of adversity, but sometimes I think, Christ, Travis! You’re 28 and today you’re gonna spend five hours playing make believe alone at your desk? For zero dollars? And then I’m like, Yes, because apparently I’m the kind of arrogant obsessive who just won’t let this shit go.

When I was brash and 22 and still recovering from the influence of the Beat Generation, I might’ve found this irrational commitment admirable, even virtuous. I don’t think I do anymore. Right now I’m working on this column while my girlfriend sits three feet away on the couch. I should be talking to her, hearing about her day. Instead, it’s you, me, and the text, baby. Then I think of all the hours I spent on this novel—this still-unpublished novel—whether actually writing it or working through its scenes while pretend to listen to what a friend is talking about over beers. What could these hours have added up to if I’d used them to mentor underprivileged kids?

The literary life is no kind of sainthood. The obsession and ego that drive it aren’t virtues, but they might be prerequisites for making art. And if we want to live in a world with art, we might need a tolerance for the ugly forces gurgling all under the skin of even the most sweet-natured artists. That’s how I rationalize it, anyway. We’ve got to believe in what we’re making all the way to the edge of delirium, or it won’t get made. For the individual novelist, though, seized by anxiety at her word processor, these macro theories aren’t any comfort. She has to—I have to—hope that the obsession will pay off and 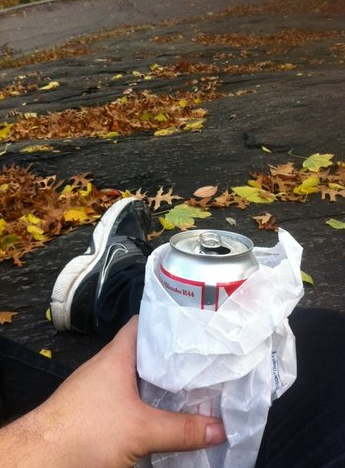 So I’m back on that rock in Morningside Park. It’s accented with autumn leaves now. I crack open my beer and put Arcade Fire on my iPod. This time I don’t cry. It’s not that I don’t feel proud. I do. Maybe even more proud than last time, given that I’ve made it another two years without getting shaken off course. This time, though, as near to finished as I feel, I realize that I might not be anywhere close to done, or worse, that this book might never claw its way out of the circle of friends who are kind enough to spend some time on it with their red pens and words of encouragement. But virtuous or not, I can take a little bit of comfort in the fact that after almost four years, I seem like the kind of arrogant obsessive who won’t let this shit go.