Six-story brick buildings run right into each other with no alleys to separate them, and the front-facing fire escapes cling to the facades like permanent construction scaffolding. The street is a narrow one, too, meaning it’s almost always cast in dreary shadows except for a short midday reprieve when the sun is directly overhead. The name “Orchard Street” sounds bucolic. The place Orchard Street is not, and it hasn’t been for a very long time. The namesake orchard belonged to James De Lancey of the Delancey Street De Lanceys. James had trouble picking a side during the American Revolution, assuring both the Sons of Liberty and the royalists of his loyalty, but when the shit hit the fan, he broke British and left New York in 1775. He never came back, and the State of New York auctioned off the orchard along with his other possessions in 1787. By the time Orchard Street became a major artery in the immigrant-heavy Lower East Side in mid-to-late 19th century, the actual orchard was long gone. Tenements sprouted to replace the trees, and the name of the street must have seemed like doublespeak on the level of Dubya’s Clear Skies Act. 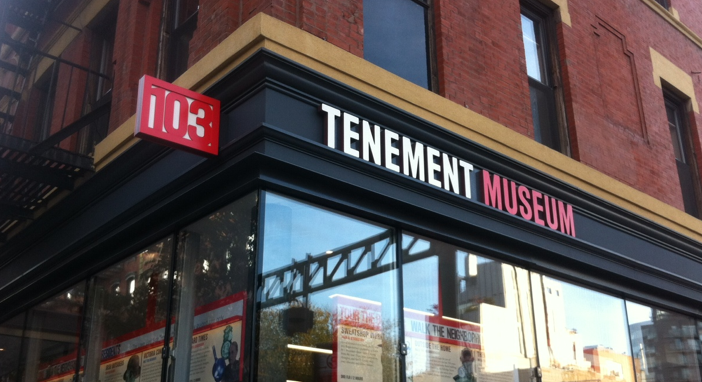 The Tenement Museum is at 97 Orchard. It’s the kind of place where they try to revive worlds rather than preserve artifacts. Different tenement apartments are mocked up to look like they’re from different eras of working class misery. Depending on your tour, you may have a Q&A with a Sephardic Jew from the 1890s. I forget what her name was—it’s been a few years since I was there—but I remember her being fixated on shooing away my tour group out before her family got home. It gave the voyeur aspect of the place an appropriate sense of clandestine urgency. The reenactor answered our questions patiently enough, but she made us feel like we really shouldn’t be there. It might be this Peeping Tom verisimilitude that makes the place attractive to teachers whose students are inclined to forget history consists of lives that real people lived, not litany of forgone conclusions. During my first semester at NYU, I thought I might study urban anthropology and I chose my courses accordingly. Two of these courses had fieldtrips to the Tenement Museum and the third’s professor admitted he’d considered taking us. 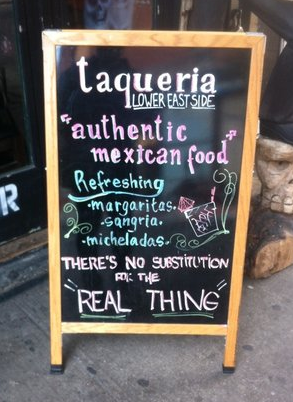 As is the way with New York and with many other cities, what was once gritty becomes hip, then money pours into cool and washes it away. Either nobody notices or they decide to like the sheen it leaves behind. Especially up at Orchard’s northern tip at Houston Street, you find the bars, boutiques, and restaurants that signal the confluence of chic and money. The hipness that brings the wealth is grounded in a poverty that is endlessly replayed, whether at the Tenement Museum or just in the mythic baggage that the LES carries with it, always present if only subconscious. A sign at the Taqueria Lower East Side at 198 Orchard summarizes the situation, throwing quotes around “authentic mexican food” and the “REAL THING.” Maybe the manager has read Baudrillard, or maybe it’s just a lack of punctuational acumen that’s cast the whole project of authenticity in doubt. I’ve written a book about the politics of authenticity, and now I’m worried this sign has a better handle on the postmodern condition than I do. 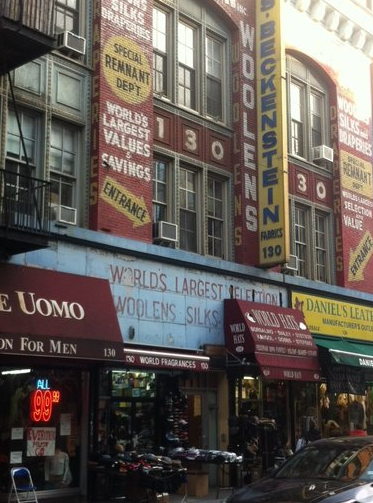 The further south you get on Orchard, though, the fewer quotation marks you see. The irony fades below Delancey Street. Warehouses hock discount fabrics, and cheap clothing and suitcases are cheaply advertised. It’s interesting how the things that seem the most authentic—even just the authentically naked pursuit of profit—doesn’t see the need to advertise itself as such. The authentic don’t think much about their authenticity, and maybe those who strive the hardest to be their authentic selves while eating authentic food in authentic neighborhoods are those who worry that a thick film of something—mediation? psychological distance? expectations?—separates them from the real world that really surrounds them. I think a lot about authenticity. I wonder what that really means.