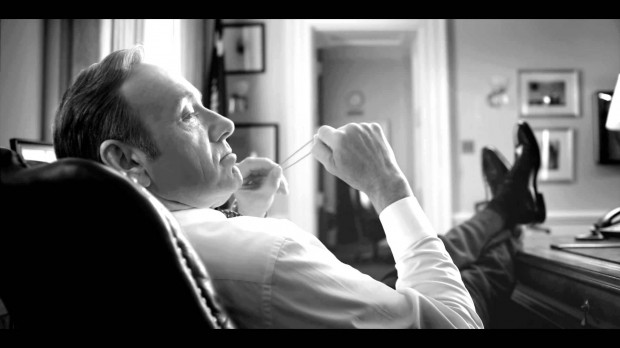 Saved by the Bell

Transfer student Frank Underwood charms his way into the gang’s good graces with his southern drawl and folksy witticisms. Jessie is so taken with him that she readily accepts an invitation to hang out at his place and discuss her upcoming campaign for student body president. Excusing himself to use the bathroom, Frank leaves Jessie alone in the kitchen with his dad’s espresso machine. An hour later, Jessie arrives at The Max for an interview with the Bayside Breeze. Her teeth-grinding, knee-bouncing, and repeated mention of “a nasty case of the mud butt” prompt the reporter to ask if she’s back on caffeine. The ensuing scandal leaves Jessie’s campaign in tatters, and Frank uses the opportunity to get himself elected.

Ricky hires Frank Underwood as the new saxophonist for his band. Lucy uncovers his plot to depose Ricky as bandleader, but Ricky is so taken with Frank’s laconic matter and professional competence that he refuses to believe her. Lucy sets out to find some hard evidence. Sadly, her sleuthing style involves regular infusions of physical comedy that—while executed with a spunk and joie de vivre that will delight TV fans for generations to come—are broad enough to tip off Underwood to her plot. Frank throws Lucy in front of a train, turns to the camera, and wryly explains, “Perhaps she had some ‘splainin to do, but a hunter hardly offers its prey the opportunity to ‘splain itself.”

The office is abuzz over a new prospective client: Underwood Peaches. Pete Campbell, still in the doghouse for crashing a car in front of a group of Chevy execs, is tasked with winning over company owner and CEO Frank Underwood. “Do whatever it takes,” Don instructs. “If the man takes a shit, I want you there with warm towelette and a smile on your face.” After a boozy dinner at Le Cirque, Pete joins Frank and his wife Claire for scotch in their luxury suite. Frank raises a glass. “To Campbell,” he says. “Yes,” Claire agrees, “to Peter.” They engage in awkward three-way sex that makes little narrative sense but provides a “holy shit” moment for viewers at home.

While investigating the murder of Laura Palmer, Agent Dale Cooper dreams that a giant in suspenders lifts the corner of a lumber pallet and insistently points beneath it. A startled Cooper sits bolt upright in bed and shouts, “Underwood!” After pursuing clues that include a dancing dwarf, the diaries of a reclusive horticulturist, and a known prostitute hitching a ride with Doug Stamper, Cooper deduces that City Councilman Frank Underwood killed Laura Palmer to cover up his financial interests in the casino/brothel One-Eyed Jacks. Angry that his jail cell doesn’t come equipped with an Xbox, a rabid Underwood beats his head bloody on the cinderblock wall. With Frank dying in his arms, Cooper asks him why he killed Laura. Underwood utters one word—“power”—and dies. Flummoxed by his accent, Cooper and his colleagues decide that Pow-Wah is demonic entity sent from the Black Lodge to prey on human happiness.

The White House staff is working around the clock to shepherd Social Security reform through Congress, but Minority Whip Frank Underwood has proven a worthy adversary. The wily Underwood believes that defeating the bill will weaken his rival Matt Santos, a handsome young congressman from Texas with aspirations of high office. President Josiah Bartlet invites Underwood for a private meeting in the Oval Office. They play chess while Bartlet pontificates on Hamlet, the Battle of Thermopylae, and the better angels of our nature. A deeply confused Underwood looks up at Bartlet. “Mr. President,” he asks, “what is the wet stuff leaking from my eye sockets?” Bartlet smiles gently and replies, “The tears of a man strong enough to put country above self.” Underwood leaves the White House punch-drunk and half-crazed, perplexed at how he stumbled into a universe where soaring idealism and erudite dialogue is enough to redeem a deeply corrupted system.

Mike and Jesse are both retiring from the criminal life, and Walter White is in need of a new partner to handle the distribution of his famed blue meth. Attorney Saul Goodman introduces him to Frank Underwood, a well-connected local politician with a reputation for ruthless pragmatism. We are treated to a montage of the new pals skipping hand-in-hand, clotheslining old ladies, and using Lil Bub as a hacky sack. Their business grows as their friendship deepens. When Walt’s cancer returns, Frank sits with him through his chemo sessions, holding his hand and tripping nurses to cheer him up. They talk about love and villainy, and about what their empire amounts to in the grand sweep of human history. Frank quotes Percy Shelley:

Nothing beside remains. Round the decay
Of that colossal wreck, boundless and bare
The lone and level sands stretch far away.

Finally, the inevitable. Frank stabs Walt in the eye, drops a dime on Skyler, and runs off to Cuba with everybody’s money.