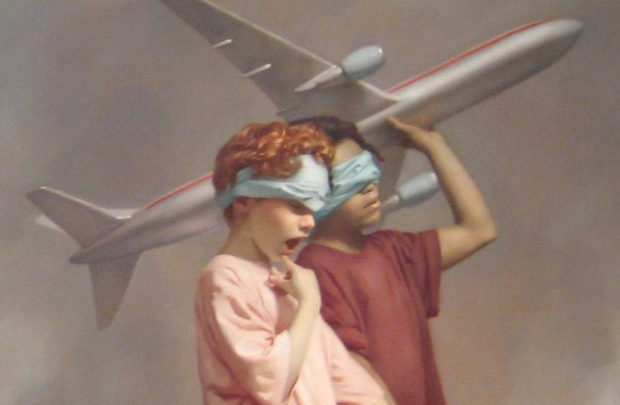 Thirteen Ways of (Not) Looking at a Crime Scene

Celebrity nudes. Decapitated journalists. Beatings on elevators. When should we look, and when should we avert our eyes?

I haven’t watched Steven Sotloff die. I haven’t watched James Foley or David Haines die either. The news showed me screenshots from the moments before execution. Each man was dressed in Guantanamo orange, and each executioner—the same executioner?—is terrifying and ridiculous, a grown psychopath in a little boy’s ninja costume. How bloody was it? I wonder, but I don’t wonder enough to hunt down the full video. Maybe you know how bloody it was. We live in a world where some humans saw off the heads of other humans. I won’t blame you for staring. But I don’t know what the glint of a blade or the last sweat rivulet of a doomed journalist is supposed to help me understand. It’s a few minutes of tape torn from the time-axis of causality and the space-axis of geopolitics. It’s pain. It’s death. It’s a fact. But does seeing the blood help us know what it means?

Susan Sontag didn’t want us to look at suffering until she did. In 1977’s On Photography, she argues that too many pictures of too many horrors make us care too little about any of them. We become chronic voyeurs. By the time she published Regarding the Pain of Others in 2003, Sontag had reconsidered the value of such images. A constant stream of tragedy can numb our capacity to feel it, but as watered down and deceptive as they may be, troubling images can provide a visceral, if imperfect, point of contact with the suffering of strangers. Besides, she writes, “No Committee of Guardians is going to ration horror, to keep fresh its ability to shock. And the horrors themselves are not going to abate.”

Janay Rice, posting to her Instagram page after the “elevator video” became public:

No one knows the pain that [the] media & unwanted options from the public has caused my family. To make us relive a moment in our lives that we regret everyday is a horrible thing. […] If your intentions were to hurt us, embarrass us, make us feel alone, take all happiness away, you’ve succeeded on so many levels.

Yes, but right now she’s terrified and at some point she’ll see her husband for the monster he is.

Yes, but the tape exposed a league’s lies.

Yes, but the NFL is one of the country’s most powerful cultural institutions, and now we know how little it cares about women’s lives.

Yes, but the incident has inspired a nationwide discussion about domestic violence.

Yes, but without this tape a man would receive a slap on the wrist for the brutal assault of a woman.

Yes, but we need to expose the systematic efforts of a multi-billion dollar corporation and a DA’s office to minimize and obscure that assault.

When we look at an image, we change its meaning. Take a picture of your body. Send it to a lover. It’s a gift. It’s beautiful. It’s playful, pleasurable. But when it’s pried loose from your relationship and sent tumbling into the universe, the eyes of the crowd can transform it into a document of humiliation.

Jennifer Lawrence’s face is washed out. The photo honestly possesses the lo-fi amateurism that American Apparel ads and Terry Richardson snapshots pretend to. Respectable Media stay respectable by cutting her off at the shoulders. They show her face, though, with her eyes wide, her finger to her mouth. The expression is sexy, intimate, all the more so because it wasn’t performed for our benefit. The expression is stolen, hijacked, no more meant for us than her bare chest.

If you don’t do anything you’re ashamed of, then you have nothing to hide. If you don’t want it seen, don’t make it. Images, video clips, tweets, quotes are torn from their moments of origin. We force them to represent their subjects and speakers in all contexts. I don’t want to be the same at dinner with my parents as I am drinking whiskey at the Levee as I am delivering a lecture on Eugene Debs as I am lying in bed with my girlfriend as I am alone writing. I’m not ashamed of any of these versions of me, but I’m none of them with everyone. Different people and different situations tease out different parts of ourselves. This isn’t inauthenticity; it’s complexity. When we claim the right to stare at each other from all angles, we implicitly demand that everyone always act as one-size-fits-all people, people for all contexts, homogenized people. That is, we demand that people not act like people at all.

Images allow viewers to experience the emotional sensation of understanding, an unearned sense of comprehension that feels for all the world like the real thing. Eddie Adams won a Pulitzer Prize for his photograph of Nguyễn Ngoc Loan executing a Vietcong operative. The photo is the shard of a moment. It doesn’t tell us that the man with the gun to his head was believed to be the commander of a death squad. It doesn’t explain the hubris that drew the US into Vietnam and that kept it there for years, bleeding and drawing blood. The picture didn’t make the public understand, but it made them feel. Fuck this war. The act of looking turns a condemned man—Nguyễn Văn Lém—into a blunt instrument of American outrage and disgust. But when you’re trying to end a war, it’s better to wield a blunt instrument than show up empty handed.

Writer & activist Nick Mirzoeff has theorized the right to look:

It begins at a personal level with the look into someone else’s eyes to express friendship, trust, solidarity or love. That look must be mutual, each inventing the other, or it fails. As such, it is unrepresentable. The right to look claims autonomy, not individualism or voyeurism, but the claim to a political subjectivity and collectivity.

Ray punches Janay on the elevator. A whole nation watches. Men on ESPN shake their heads and talk about pasting the faces of women they love onto her body. Through the transitive property, the men decide the video shows something sinister. I click the play arrow on TMZ’s website and I can’t fully explain why. Even only within myself, I don’t know how to untangle solidarity with a battered woman from a prurient voyeurism. We looked. She didn’t look back.

Remember the Iraq War? Remember the pictures of dead soldiers? The blood and flesh and busted bone? The cost of war? Me neither. We never looked. A survey conducted at the height of the war showed “that over a six-month period, no images of dead American troops appeared in the New York Times, Washington Post, Los Angeles Times, St. Louis Post-Dispatch, Atlanta Journal-Constitution, Time or Newsweek.” When you’re trying to end a war, it’s better to wield a blunt instrument than show up empty handed.

Show a severed limb. Show a woman’s nipple. Show the word “shit.” A gang of Helen Lovejoys will rise up, gnashing teeth and barking to the heavens: “Won’t somebody please think of the children?!” They demand that we conduct discussions of the adult world’s adult problems in terms that won’t frighten a toddler. Baby might look, so no one can see.

Images are better at capturing specific instances than complex systems and shifting climates. After decades of global warming activism, we’re still recycling the same clips of polar bears on ice drifts. 400,000 people take to the streets of Manhattan, and it’s powerful, but the images are interchangeable with any other big protest march. The nation barely looks. We’ve seen this one before. The Sunday talk shows talk about other things. Everyone is too busy opining on videos of women beaten, on pictures of women without clothes, on how best to annihilate the purveyors of desert snuff films.

I want to know who the NSA is watching. I want to read secret memos that implicate corporations. I want to see a thousand, a million, a billion tweets launched against dictatorships and empires. I admire Anonymous. But it’s no coincidence that those cyber guerrillas for social justice first organized themselves on 4chan, the pipeline of stolen celebrity nudes. Together they’re the Janus-faced distillation of a certain digital tendency, an ideology that claims we in the shadows are entitled to look at you in the spotlight. The you can be an oppressive government, scheming against its population. The you can be a young actress, naked in her bedroom.

Give me rules. Give me guidelines. Give me a test—simple criteria, cleanly applied—that tells me when my gaze is ethical and when it’s not. Give me a nudge when I’m oblivious, when not looking blinkers me. Give me an elbow when I’m voyeuristic, when staring implicates me. Give me context. Give me understanding. Let me see. Let me close my eyes. Or don’t. No Committee of Guardians is going to ration horror. You’re not the boss of me. I’m not your responsibility. It’s 3am. My apartment is dark. The internet glows. Look, or don’t. Look. Or don’t.

Featured image: Detail from Graydon Parrish’s “The Cycle of Terror and Tragedy.”