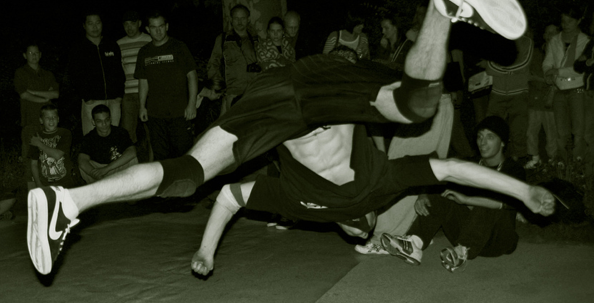 Three Scenes from a Better Universe

[A large cardboard shipping box is unceremoniously hurled onto the porch from off-screen. It collides with the front door. Immediately, The Kid swings the door open, looks down at the box.]

[The Kid lifts the box into his arms with some effort and carries it into the house.]

[The Kid drops the box on the hardwood floor, runs off screen for a moment, returns with a pizza cutter in hand. He cuts the packing seal on the box with the pizza cutter, tosses the cutter aside, tears open the box. Blue styrofoam packing peanuts spill everywhere. He thrusts his hands into the box.]

THE KID:
(staring into the box with awe) It’s finally here…

[The Kid looks into the camera, smiles, lifts a bloody, rotted-out human ribcage from the box with both hands. Packing peanuts and a thing of meat fall out of the chest cavity and into the box.]

[The Kid freezes in that pose, staring into the camera. Still smiling, he stares into the camera continuously. Nothing moves. After three minutes, the camera slowly zooms in, very slowly. The camera zooms into The Kid’s face, his eyes, his right eye, his iris. An image comes into focus: It is the silent, screaming face of The Kid, reflected against the surface of the eye. His reflection is screaming something unintelligible into the camera, as if to warn the viewer. He can’t be heard.]

[Weekly meeting of the B-Boy crew. Four dudes standing around a large cardboard flap and a boombox. They take turns dancing, trying to one-up each other with elaborate breakdancing routines. Legs Lemmon spins on his head, goes up on one hand, comes out of the spin on his heels.]

PROFESSOR RUNGLE:
Fucking weak, son. Show him how we play it, Q.

[Dizzy Q starts his routine with some footwork, goes low, spins on his head with his arms crossed over his chest. The spin goes on for three full minutes. The other three breakers watch, faces blank. Professor Rungle nods occasionally. Dizzy stands up like nothing happened, holds up his hands.]

BAWDY BOMB:
How you gunna top that, boy? Huh?

LEGS LEMMON:
Peep it ya’ll. I’m about to pray for death.

[Legs Lemmon gets down on one knee, clasps his hands together in prayer, bows his head in silence. His friends chuckle nervously, look at each other, shrug.]

DIZZY Q:
This ain’t Sunday School. The fuck you about, Legs?

[Bawdy Bomb checks his watch, twists up one corner of his mouth. A bolt of lightning from the clear sky strikes the praying Legs Lemmon right in the top of his gourd, blowing his skull open and laying him out on the cardboard. His exposed brain is on fire. He is very dead.]

PROFESSOR RUNGLE:
(Calm) Okay. Pause for a second. (Pointing to the corpse of Legs) Ain’t never seen shit like that.

DIZZY Q:
Oh I’m up out of this bitch.

“The Inexorable Heat Death of the Universe”

[The borderless expanse of outer space. Ten million stars shining in the dark. From that field of lights emerges an indistinct shape. It tumbles very slowly, end over end, toward the camera. As the object approaches the viewer, it comes into focus: It is the unmoving body of elderly Orson Welles. He’s wearing a tuxedo.]

ORSON WELLES:
(Muttering) Mmaaaah yess, the French Champagne. It has always been celebrated for its excellence.

[Orson Welles drifts near the rings of Saturn, hopeless and very dead.]

ORSON WELLES:
There is… a California Champagne by Paul Masson, inspired by that same French excellence.

[Orson Welles plunges into the outermost border of the Rings of Saturn, scattering dust and leaving a silicate contrail in his wake.]

ORSON WELLES:
It is fermented in the bottle, and like the best French Champagne, it’s vintage dated…

[His monologue is interrupted by the nearby collision of two mansion-sized space rocks. He watches, clearly unimpressed, facial expression unchanged. Tiny shards of rock and ice bounce harmlessly off of his face.]

[The view of Titan in orbit is utterly wasted on his dead eyes.]

Parke Cooper is a second-year MFA candidate in Fiction at the University of Arizona. He is the winner of the 2013 Tucson Festival of Books Literary Award in Fiction. When he's not writing, he's screaming, and when he's not screaming, he's teaching.