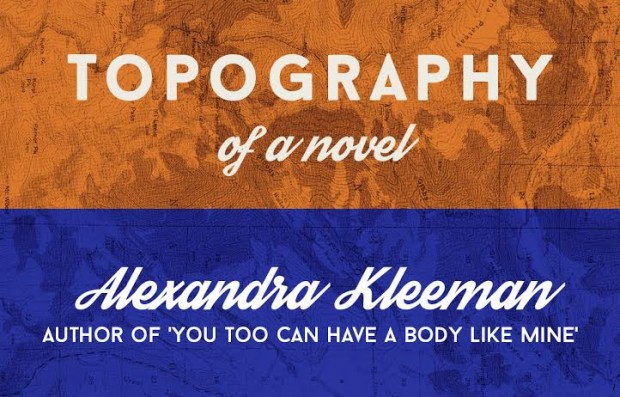 Topography of a Novel: You Too Can Have a Body Like Mine

Eggo waffles, Pac-Man, and other fuel for literature.

Every book has its own texture, materiality, and topography. This is not only metaphorical; the process of creating a novel produces all sorts of flotsam–notes, sketches, research, drafts–and sifting through this detritus can provide insight both into the architecture of a work and into the practice of writing. In this series, Blunderbuss asks writers to select and assemble the artifacts of a book in a way that they find meaningful and revealing. For our second installment, Alexandra Kleeman shares some of the spaces, notebooks, and waffles that fueled the creation of her debut novel You Too Can Have a Body Like Mine, released today by HarperCollins.

In You Too Can Have a Body Like Mine, a woman known only as A lives in an unnamed American city with her roommate, B, and boyfriend, C, who wants her to join him on a reality dating show called That’s My Partner! A eats mostly popsicles and oranges, watches endless amounts of television, often just for the commercials, and models herself on a standard of beauty that exists only in such advertising. YTCHABLM has been hailed as a resonant exploration of “the essential creepiness of living in human skin” (Emily Gould), and is already drawing comparisons to White Noise and The Crying of Lot 49. 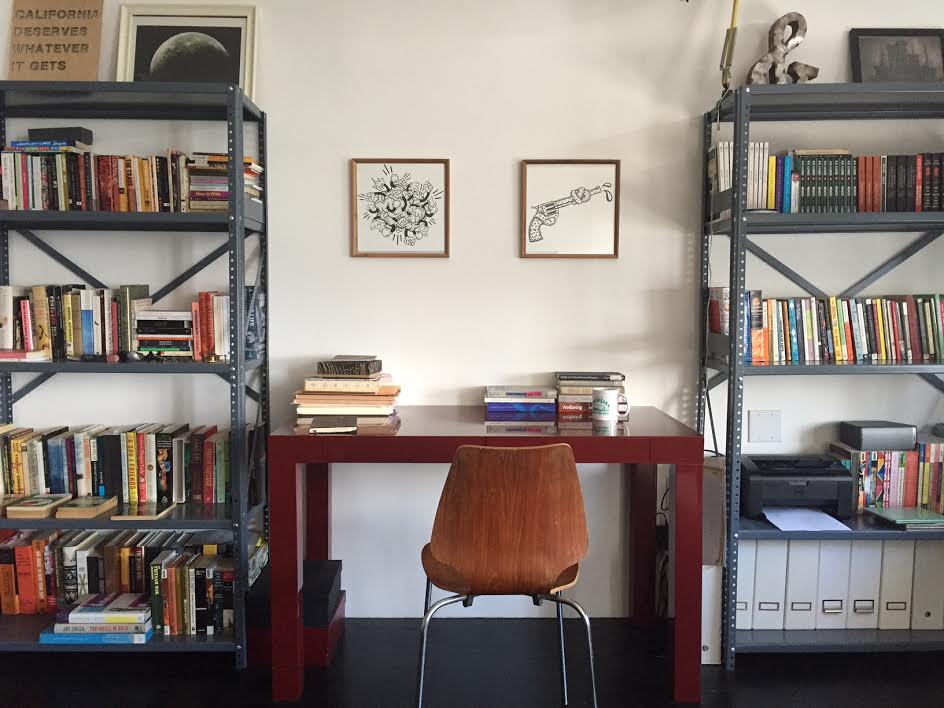 ​This is the day desk–all through the final edits I worked here, at the sunny end of our apartment in Staten Island.  Working here makes you feel connected to the world in small but significant ways–you can see light change as time passes, there are human sounds, some small slivers of sunlight reach your skin and aid in the production of vitamin D.  But at night, working at this desk would keep my partner up, and I tend to work best at the hours when nobody e-mails you–from midnight until the first junk mail starts coming in at 5:30 a.m.  So at night I write at the kitchen table, where it feels like it is always 1 a.m. 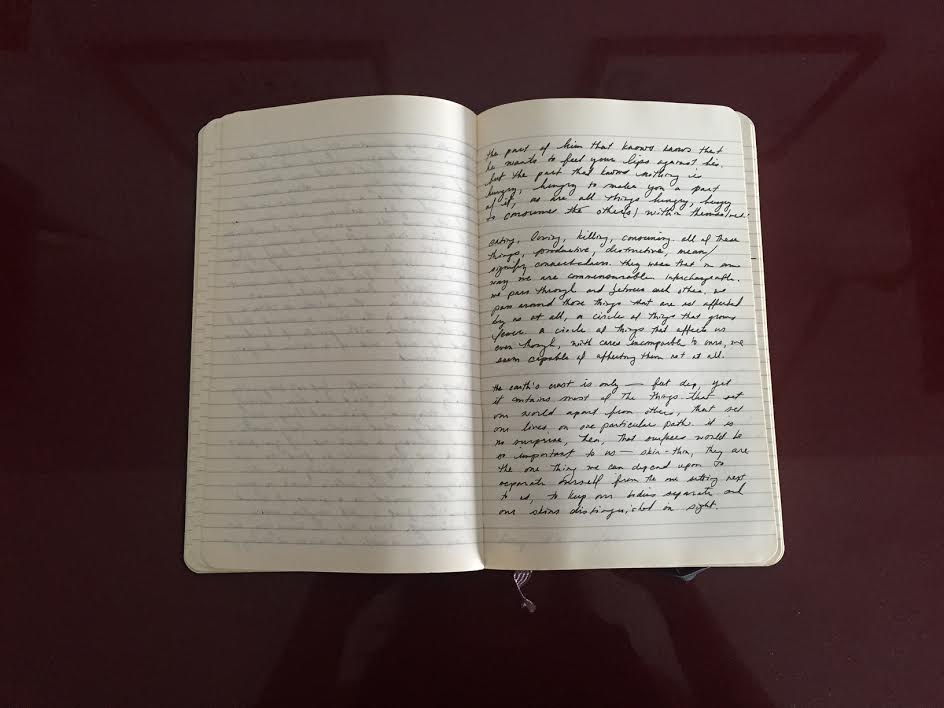 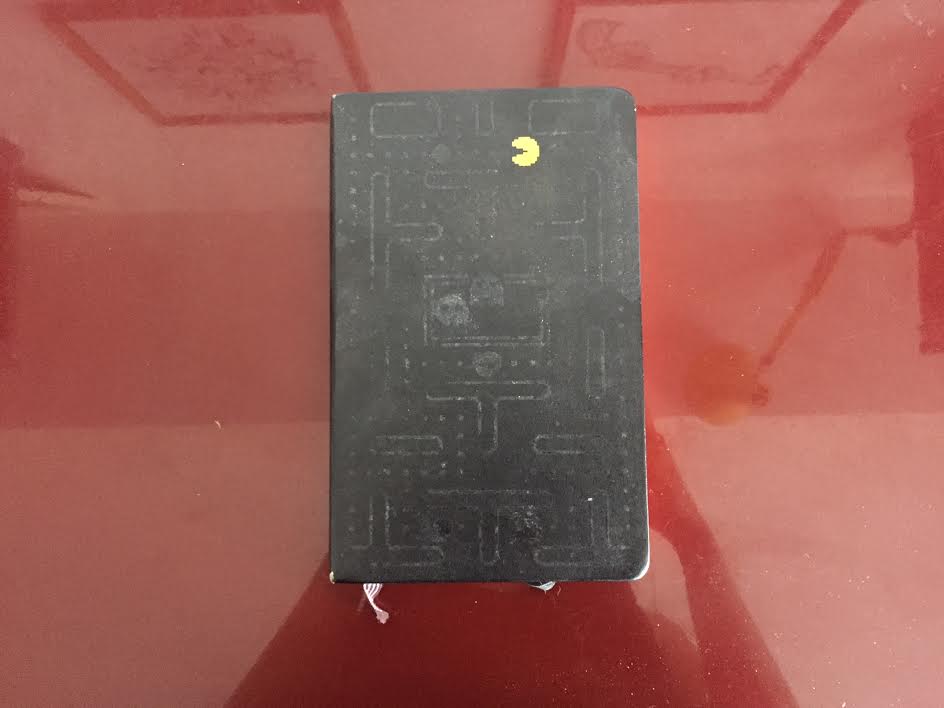 My writing process always begins on paper, and moves onto the computer as I build finished sentences.  I wrote all ideas and idea-scraps down in this notebook, and was surprised when I looked back through it at how many bits made it intact into the novel.  The bit about the earth’s crust appears in the last pages of the book.  Writing in a notebook doesn’t have the same pressure for me that writing on the computer screen does–but it also never feels “finished” to me when it’s handwritten.  I set down directions the story could take in my notebook, so there’s a branching and self-contradictory plot written down in these, like a sloppy choose-your-own-adventure novel. 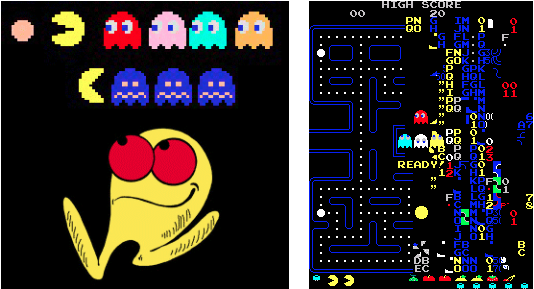 ​The notebook is from the Pac-Man themed Moleskine collection that came out a few years ago. Pac-Man was one of my biggest influences when I was writing, but didn’t end up making it into the final text at all. I see him the way I see Wile E. Coyote–a Beckettian character trapped in a stripped down world where the action is defined solely by his singular desire (to consume the Roadrunner/to consume all the dots), and the way in which the world serves as obstacle to that desire. The difference between the two is that Pac-Man is actually in some sort of harmonious or balanced relationship with his surroundings–the ghosts are kept in check by the power-dots (not their technical name), predator can become prey. Some experienced players have even claimed that at higher levels of the game, the ghosts are not enemies, and can actually be controlled by Pac-man’s movements. And then there’s the legend of the 256th level–Pac-Man was originally designed to be a game without end, but a glitch in the program prevents users from passing beyond this level, which is split-screened: the left hand of the screen is normally navigable, while the right half attempts to draw 256 fruits. Which I take to mean something like: the individual within capitalistic society can transcend that society only by merging with it wholly, and destroying themselves. 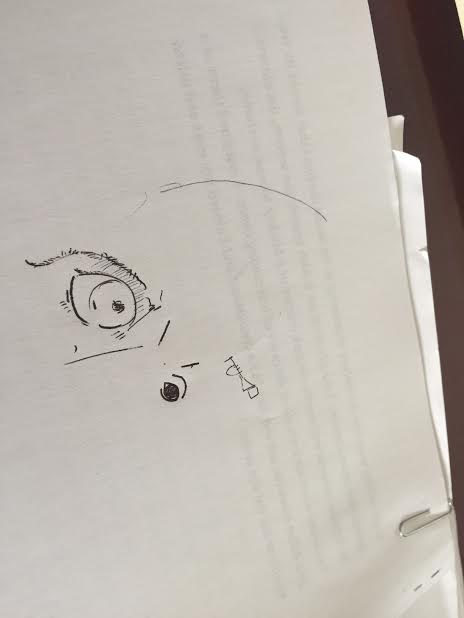 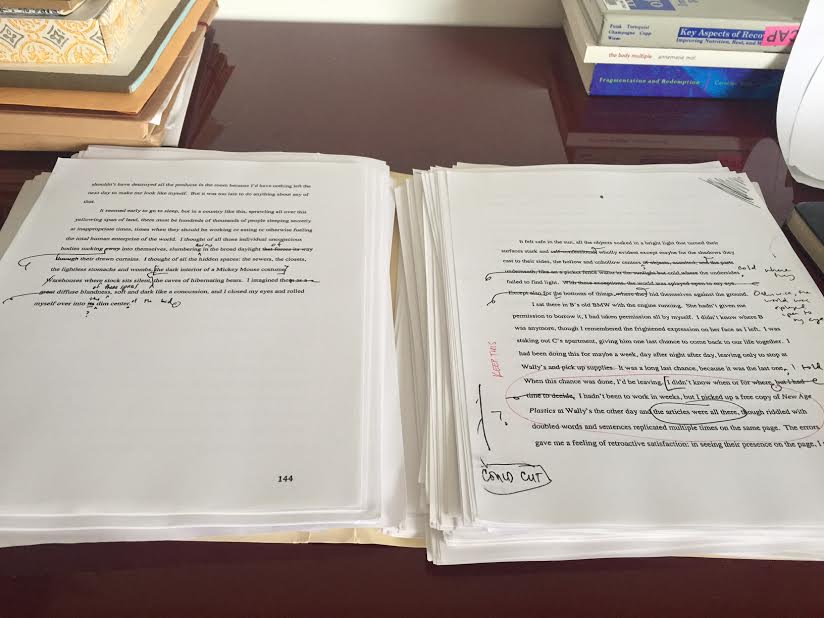 ​A sketch from the back of one of the workshopped chapters that I’ve kept in my files, and a couple pages of proofs that my editor sent me and I then marked up. As you can see, he thought that I COULD CUT one of these paragraphs but I decided that I should KEEP THIS. 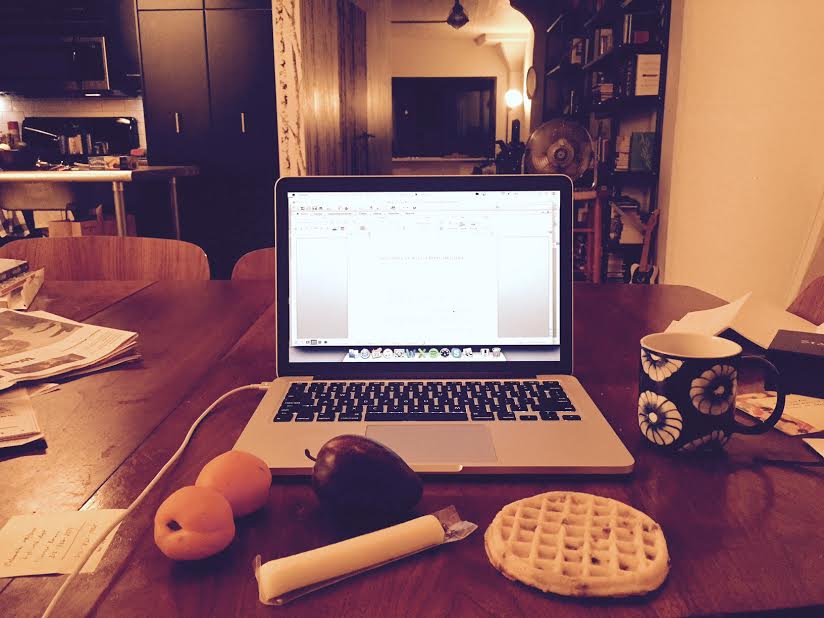 After my boyfriend goes to sleep I move to my night desk, the kitchen table, and start working. This location is ideal because it’s far from natural light that would tell you how much time you’ve wasted, and it’s close to the snacks. My main snacks when I work are fast, round (or semi-round), and repetitive. I like not making a new choice, just using the old choice again. I will eat five chocolate chip Eggo waffles in a night sometimes, slathered in peanut butter and honey. When I do this I feel like Pac-Man. At the end of the night I walk to the window, where the sun is rising and there are cruise ships sliding lazy through the harbor. 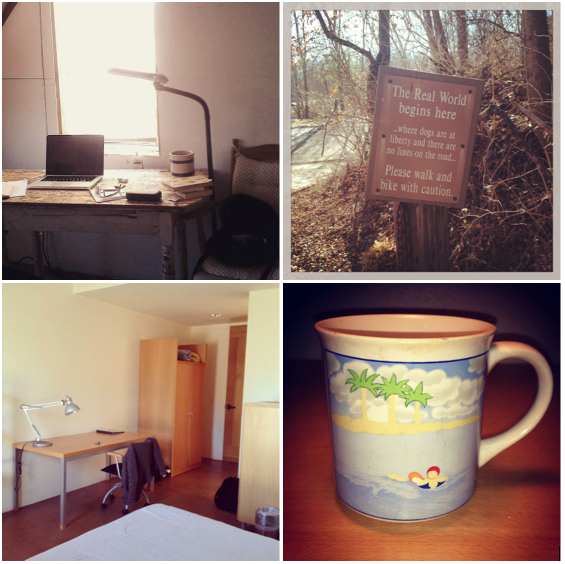 Some of the other desks I worked at, and coffee cups I used, at residencies at ArtFarm Nebraska, the Santa Fe Art Institute, and the Virginia Center for Creative Arts. I like this coffee cup because it seems to tell a story, a scary story about someone drowning off-shore and being saved by a clown.

Alexandra Kleeman is the author of the debut novel You Too Can Have A Body Like Mine (Harper, 2015) and Intimations (Harper, 2016), a short story collection. Her fiction has been published in The Paris Review, Zoetrope: All-Story, Conjunctions, Guernica, and BOMB, among others. Nonfiction essays and reportage have appeared in Tin House, n+1, and The Guardian. She is based in Staten Island.