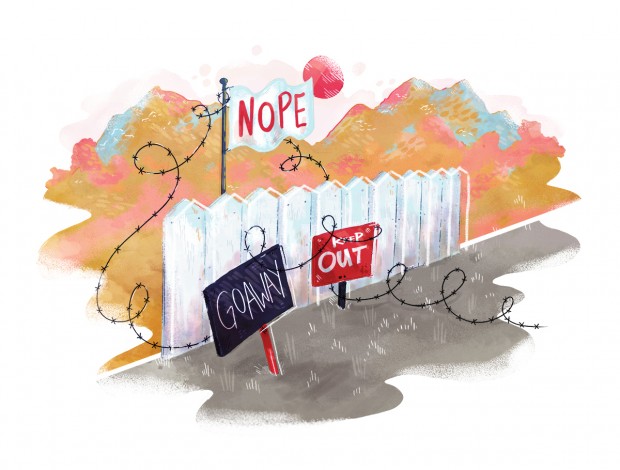 Eight or ten years ago, I found myself spending a lot of time reading about secession in America. It began as research for my novel, The Gospel of Anarchy, but quickly took on a life of its own. When, a little while later, Sarah Palin emerged as a national political figure, and her involvement with the Alaska Independence Party made headlines and stoked outrage, I felt myself to be at the forefront of current affairs and thought to capitalize on my prescience by writing a nonfiction book proposal for a history of the subject. I began making notes, and had some casual conversations about my project with a few friends, my agent at the time, at least one interested editor, and my mom. Despite near-unanimous encouragement (my mom was especially excited) it gradually became clear that reading two books in a row about the Whiskey Rebellion does not qualify one as a historian, so I quit. But when Blunderbuss invited me to contribute something unconventional to their magazine, I thought of this first and could not dislodge it with any other idea that came to mind. I still don’t plan to write this book, though if you are a publisher or editor reading this and have a mind to convince me otherwise, you are welcome to contact my agent, Noah Ballard, at the Curtis Brown agency. Certainly I am better-equipped—more seasoned as a nonfiction writer, more disciplined in general—to take on such a project now than I would have been in my mid-twenties, when I dreamed it up. Otherwise, and probably for the best, the below is offered as an artifact, permanently provisional and half-thought out, a road to nowhere—which is itself a decent precis of the story of American secession and separatist movements.

Until recently, I was like most people in that when I thought of “secession” I thought primarily of the Civil War. While this is obviously the most important and best-known instance of secession in American history, it’s far from the only one. I’ve begun to research other American secession movements from 1776 to the present, and I’ve found a ton.

As far as I can tell, no popular or comprehensive history of secession in America has ever been written. I’d like to write a book that will tell the stories of the most interesting, lesser-known secessions in American history, from our own founding to the present. Obviously, the focus is historical, but it will be pop-history in the manner of, say, William Hogeland’s The Whiskey Rebellion or Les Standiford’s Meet You in Hell. The book will also balance its historical focus with contemporary journalism: I’ll meet and speak with contemporary secessionists, visit historic secession-related sites, and hopefully attend at least one North American Secessionist Convention (an annual gathering). Individual chapters from the book will be of a length and style appropriate for publication as essays.

In terms of style and tone, I’d like the book to be accessible and fun. I’ll give background on the idea of secession, and how it has been variously understood and embraced or rejected over the years, but what I’m really interested in is story-telling, and bringing historical and contemporary voices to light. I’m not interested in championing or denigrating any causes: it will be self-evident, I think, who has a justified grievance, and who is just a racist, fascist, or otherwise insane. What will be interesting in each case is the specific contours of the conflict, the personalities that shaped it, and how the determination was made that secession was the best or only recourse. Some models that come to my mind include Sarah Vowell’s Assassination Vacation and J.C. Hallman’s The Devil is a Gentleman. I’m open to suggestion and discussion regarding the scope, length, and other aspects of the project. What follows is a long list of noteworthy secessions from my preliminary research. The descriptions are summary and paraphrase, just to give you a taste of the variety of ideologies and locales I could potentially write about. More extensive research, travel, and reporting will in time reveal whose stories are the most compelling, and these factors will ultimately shape the book.

SECESSION MOVEMENTS BEFORE THE CIVIL WAR

The Revolutionary War (1776) – We seceded from the British Empire.

The Whiskey Rebellion (1794) – Poor rural whiskey distillers’ attempts to resist taxation by the Hamilton government eventually lead to talk of an independent republic at the Forks of the Ohio, and an armed insurrection suppressed by the U.S. Army.

The South Carolina Exposition and Protest (1828) – Written by Vice President John C. Calhoun while he was in office, this document explained that if the Tariff of 1828 was not repealed, South Carolina intended to secede from the Union.

The Bear Flag Revolt (1846) – A short-lived idea, it involved the storming of a fort and lasted just a few months, but the current California state flag is based on the flag they used.

The Independent Republic of Texas (1835-1846) – A unique case in American history. Texas seceded from Mexico and was its own country for eleven years. It was annexed into the U.S. at its own request, but negotiated some very generous terms for itself (having to do with state ownership of oil and land rights) that are still in effect today.

Obviously the best-known case of secession in American history, I wouldn’t want to spend a lot of time re-treading this ground. However, some of the lesser known aspects of the War might be worth investigating: West Virginia’s secession from Virginia, which of course outlasted the War itself. Also, there’s the case of Jones County, Mississippi, which was widely believed (falsely, it turns out) to have seceded from the Confederacy when the rest of Mississippi joined it. The region was referred to as The Free State of Jones. I’m sure there are many other interesting, little-known bits of Civil War-era secession lore, which will be discovered upon further research.

SECESSION MOVEMENTS AFTER THE CIVIL WAR

After the Civil War, it would be a long time before anyone tried seriously to secede from the Union again, and no secessionist movement has ever gained enough attention or traction to be within even shouting distance of realizing its aims. In the modern era, therefore, we turn our focus to a wider variety of mostly smaller-scale secession attempts:

Absaroka (1939) – Proposed state which would have been formed out of Northern Wyoming plus parts of Montana and South Dakota.

Manhattan – Attempts to make New York City into a city-state were considered but not acted upon during the Civil War. In the 1960s, Norman Mailer ran for mayor on a secessionist ticket. As recently as January of this year [NOTE: now several years ago], a piece of secessionist legislation has been pushed by City Council member Peter Vallone Jr., who represents Queens.

The Lakota Nation – The Lakota Nation, citing a string of treaties broken by the U.S. government, announced their “unilateral withdrawal” from the Union in late 2007. The history of American Indians and especially of The American Indian Movement involves any number of instances of proposed or declared autonomy. Further research will doubtless bear plenty of fruit.

Conch Republic – A joke secession staged as a genuine protest in 1982, Key West celebrates its own Independence Day (April 23rd) with a week of celebrations. The Conch Republic exists mostly as tourist kitsch, but occasionally makes headlines for other reasons, such as the Great Invasions of 1995, when the US Army Reserve staged a mock invasion of the island but forgot to warn Key West officials, so the Conch Republic “mobilized” for war with water cannons and stale bread, and even convinced the 478th Public Affairs Battalion to participate in a “surrender ceremony” two days later. Wikipedia also reports hijinks during the 1995 government shutdown (the Conch Republic attempted to invade Fort Jefferson and re-open it for tourism) and the annexation of a span of the 7-Mile Bridge.

The North American Secessionist Convention – The annual gathering met for the second time in 2007. Two of the most active contemporary secession movements are the Second Vermont Republic and the League of the South, a neo-Confederate group. Both groups attended the Convention, and leaders from the two groups (who, other than a taste for secession, share nothing in common) appeared cordially side by side on an episode of the Glen Beck show. The Second Vermont Republic is especially interesting, because it was founded by Thomas Naylor, a former Duke University economics professor and the author of a number of well-regarded books. His newest book, Secession: How Vermont and all the Other States can Save Themselves from the Empire (Feral House, 2008), features a foreword by the journalist and author Kirkpatrick Sale, who himself is occasionally identified as one of the architects of the Vermont secession program. The book, I should note, is terrible.

The Hawaiian Sovereignty Movement – A group which represents a range of other groups, all of which you can learn about online (either via Wikipedia or their own websites). They all seem interested in some kind of sovereignty or autonomy for Hawaii, but are not all necessarily secessionists. Other fun facts: In 1983, the Native Hawaiian Study Commission of the US Congress issued findings that it owed no reparations to Native Hawaiians. In 1993, Bill Clinton issued an apology for the US government’s role in the overthrow of the Hawaiian monarchy.

Alaskan Independence Party – Founded by the late Joe Vogler, mostly known to the rest of the world because of Sarah Palin’s association with it.

Other Minor Secession Movements and Notions – There are a variety of these and they’re not all very interesting. The Cascadia Republic would be carved out of the Northwest; the city of Killington, Vermont has threatened repeatedly to secede from Vermont and join New Hampshire; Upper Michigan has proposed itself as a 51st state called “Superior,” and some versions of this plan include parts of Wisconsin and Minnesota in the new state; Martha’s Vineyard and Nantucket have tried to secede from both Massachusetts and the US; Suffolk County, Long Island occasionally proposes that Long Island secede from New York state (most recently, March 2008); the State of Franklin (a failed effort in the 1780s for a region of the Tennessee Valley to break off from North Carolina and become the 14th state); and so on.
______________
Art by Hayley Thorton-Kennedy.

Justin Taylor is the author of three books of fiction (and zero books of nonfiction). His most recent collection, Flings, was published last year and will appear in paperback in August 2015. He is in the midst of relocating across the country but can always be found at http://www.justindtaylor.net/ and @my19thcentury.