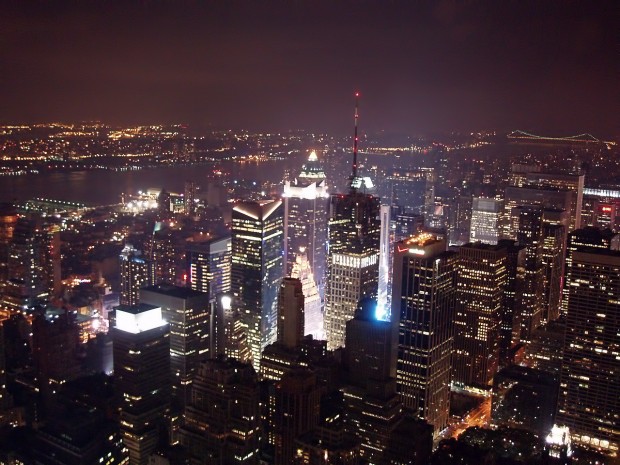 You, Too, Dislike It: City High

In New York from a rooftop in Chinatown
one can see the sci-fi bridges and aisles
of buildings where there are more miles
of shortcuts and alternative takes than
there are Miles Davis alternative takes.
There is a white girl who looks hi-
jacked with feeling in her glittering jacket
and her boots that look made of dinosaur
skin and R is saying to her I love you
again and again. On a Chinatown rooftop
in New York anything can happen.
Someone says “abattoir” is such a pretty word
for “slaughterhouse.” Someone says
mermaids are just fish ladies. I am so
fucking vain I cannot believe anyone
is threatened by me. In New York
not everyone is forgiven. Dear New York,
dear girl with a bar code tattooed
on the side of your face, and everyone
writing poems about and inside and outside
the subways, dear people underground
in New York, on the sci-fi bridges and aisles
of New York, on the rooftops of Chinatown
where Miles Davis is pumping in,
and someone is telling me about contranymns,
how “cleave” and “cleave” are the same word
looking in opposite directions. I now know
“bolt” is to lock and “bolt” is to run away.
That’s how I think of New York. Someone
jonesing for Grace Jones at the party,
and someone jonesing for grace.

Hayes captures the head rush of being in New York when everything is going right.

Words repeat throughout the poem—”alternative takes,” “Miles Davis,” “sci-fi bridges,” “New York,” “jonesing”—adding to a sense of dizziness. I’ve never thought of the city’s bridges as “sci-fi,” but at night, New York can look more like a fantasy than a physical place.

While the diction is informal, selective use of rhyme and half-rhyme heightens the poem’s musicality: “aisles […] miles”; “dinosaur / skin […] again and again”; “pumping in […] contranymns.” (After the latter pairing, “directions” even seems to rhyme.)

Hayes creates a beguiling semi-intimacy with a semi-anonymous quotation: “R is saying I love you.” Classic R. Maybe it’s my raging FOMO being exploited, but with that line, I actually feel like I’m at the party. (This trick is reminiscent of one of the greatest poets of New York, Frank O’Hara.)

The poem is mostly concerned with the external: sensory details, other people. The subject is the city. That said, Hayes gives us one big, juicy slice of interiority: “I am so / fucking vain I cannot believe anyone / is threatened by me.”

The sentiment is both charming and off-putting. Just as the city is intoxicating when you’re on a winning streak, it can be nightmarish when things go wrong. The other side of the coin is visible through the poem’s details, like a train through a sidewalk grate: “abattoir,” the violent denotation of “cleave,” both meanings of “bolt.”

Hayes’ New York is the city I know: bright lights, big egos, verbosity. By the end, when Hayes drops an audacious name-dropping pun, I’m in love with him and with the city, all over again.