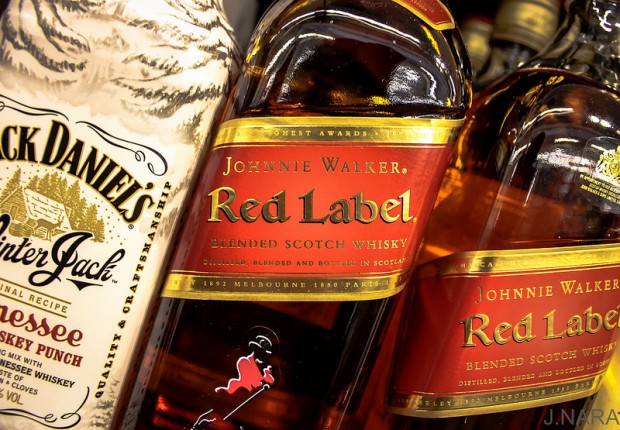 You, Too, Dislike It: Dogs, Whiskey

A weekly poem selected for likability.

This week I’ve chosen “Don’t Do That” by Stephen Dunn, first published in the New Yorker.

It was bring-your-own if you wanted anything
hard, so I brought Johnnie Walker Red
along with some resentment I’d held in
for a few weeks, which was not helped
by the sight of little nameless things
pierced with toothpicks on the tables,
or by talk that promised to be nothing
if not small. But I’d consented to come,
and I knew what part of the house
their animals would be sequestered,
whose company I loved. What else can I say,
except that old retainer of slights and wrongs,
that bad boy I hadn’t quite outgrown—
I’d brought him along, too. I was out
to cultivate a mood. My hosts greeted me,
but did not ask about my soul, which was when
I was invited by Johnnie Walker Red
to find the right kind of glass, and pour.
I toasted the air. I said hello to the wall,
then walked past a group of women
dressed to be seen, undressing them
one by one, and went up the stairs to where
the Rottweilers were, Rosie and Tom,
and got down with them on all fours.
They licked the face I offered them,
and I proceeded to slick back my hair
with their saliva, and before long
I felt like a wild thing, ready to mess up
the party, scarf the hors d’oeuvres.
But the dogs said, No, don’t do that,
calm down, after a while they open the door
and let you out, they pet your head, and everything
you might have held against them is gone,
and you’re good friends again. Stay, they said.

Whiskey, dogs, partying, and alienation—what more could you want?

I am still surprised, sometimes, by the fact that poems can tell stories. Something deep in my brain expects not to understand a new poem at all. If I do understand it, the dark anticipator certainly doesn’t expect to identify with the poem, as I do here.

Those musty old poets from high school are still burned in my memory; if a poem tells a story, doesn’t tradition dictate that it be a tale of weeping by a brook, or a modest realization in a grove?

No. Stephen Dunn, Pulitzer Prize winner/badass, wants to use his poem to tell us about going to a party where everyone sucks, deciding to drink by oneself, and being calmed—as if by magic—by animals. And then the New Yorker published it!

On a formal level, I’d say the line breaks sharpen the resentful mood, especially in the first stanza. The poem makes me wonder how Dunn imagines “that old retainer of slights and wrongs”—which can feel, physically, like its own compartment in the gut.

“I was out / to cultivate a mood.” BEEN THERE, STEPHEN. RIGHT there with you.

Finally: Aspects of the described action are “unrealistic” in a way we might have to grapple with in a short story. But no hand-wringing necessary here; being a poem, the fiction-ness is frictionless.

Thanks to Stephen Dunn and W.W. Norton for permission to share this poem!  Buy the book.

“You, Too, Dislike It” appears every Thursday.