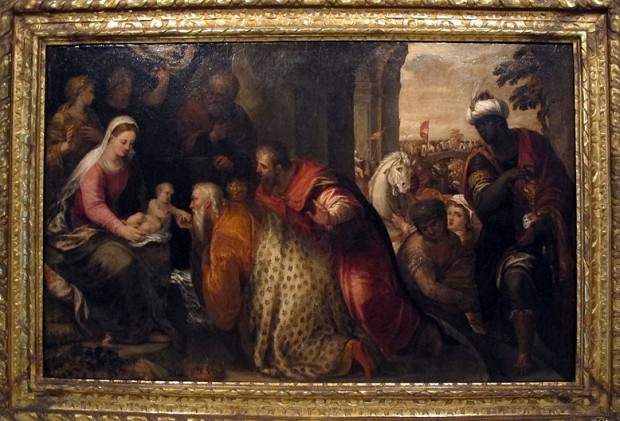 You, Too, Dislike It: Post-Christmas Misery

This week I’ve chosen “The Journey of the Magi” by T.S. Eliot.

The Journey of the Magi

‘A cold coming we had of it,
Just the worst time of the year
For a journey, and such a long journey:
The ways deep and the weather sharp,
The very dead of winter.’
And the camels galled, sorefooted, refractory,
Lying down in the melting snow.
There were times we regretted
The summer palaces on slopes, the terraces,
And the silken girls bringing sherbet.
Then the camel men cursing and grumbling
and running away, and wanting their liquor and women,
And the night-fires going out, and the lack of shelters,
And the cities hostile and the towns unfriendly
And the villages dirty and charging high prices:
A hard time we had of it.
At the end we preferred to travel all night,
Sleeping in snatches,
With the voices singing in our ears, saying
That this was all folly.

Then at dawn we came down to a temperate valley,
Wet, below the snow line, smelling of vegetation;
With a running stream and a water-mill beating the darkness,
And three trees on the low sky,
And an old white horse galloped away in the meadow.
Then we came to a tavern with vine-leaves over the lintel,
Six hands at an open door dicing for pieces of silver,
And feet kicking the empty wine-skins.
But there was no information, and so we continued
And arrived at evening, not a moment too soon
Finding the place; it was (you might say) satisfactory.

All this was a long time ago, I remember,
And I would do it again, but set down
This set down
This: were we led all that way for
Birth or Death? There was a Birth, certainly
We had evidence and no doubt. I had seen birth and death,
But had thought they were different; this Birth was
Hard and bitter agony for us, like Death, our death.
We returned to our places, these Kingdoms,
But no longer at ease here, in the old dispensation,
With an alien people clutching their gods.
I should be glad of another death.

Merry Christmas. I had a hard time finding a non-terrible Christmas poem; the nearly hilarious darkness of this one ended my search instantly.

Reading this poem forced me to brush up on my Jesus. The magi aka wise men aka kings—traditionally three of them, although they are unnumbered in the Bible—were traveling toward the Messiah, led by a star. The entire Biblical saga of the magi takes up about 300 words; the bit about gold, frankincense, and myrrh is by far the most granular detail in the narrative.

Eliot fills in the blanks, giving voice to an extremely cranky magus. Carousing camel men! Refractory camels! Villages “charging high prices”!!  I have to wonder if Eliot is having fun here. It’s easy to read him with a deadly seriousness, but there are many anecdotes of Eliot reading poems to the raucous laughter of his friends. (On the other hand, Eliot converted to Anglicanism as an adult; maybe the complaints of the magus can be read as ironic contrast to Jesus’ actual suffering.)

“Journey of the Magi” reminds me of a McSweeney’s “Short Imagined Monologue.” I’d never considered his perspective, but the guy has a right to be upset: with one mangy birth, all the old gods are dead, the whole world upended—and the guy who will lead them out of the darkness is still pre-verbal.

But as the narrator says, his journey was “a long time ago”—and he’s still in a terrible mood. The wearying, amoral setting of the first two stanzas is the world we know. Arguably, that is the poem’s bleakest irony: The birth of the savior didn’t brighten earthly life.

There are several things in the poem I am puzzled by: “death” versus “Death,” for example. (I assume the capitalized “Birth” is Christ’s birth.) That said, the poem is pleasantly digestible for a poet as supposedly difficult as Eliot.

Quick notes: at the beginning, I am amused to no end by how contemporary “Just the worst” sounds.

Also: “Wet, below the snow line, smelling of vegetation”—for whatever reason, this is the most Eliot-y line I’ve ever read. It is reminiscent of the cruel April of “The Waste Land,” with its lilacs from “the dead land”: a description of plant life that conjures human malaise.

Final thought on the misery of the magus: maybe he is pitiable from an Anglican perspective, dying before the advent of the Church—somewhat like the ancient pagan poets in Dante’s Inferno, stuck in Limbo.

Shouts to my mom and my brother for alerting me to this gem.

Photo (of a painting by Bonifazio Veronese) via sailko on Wikimedia Commons.