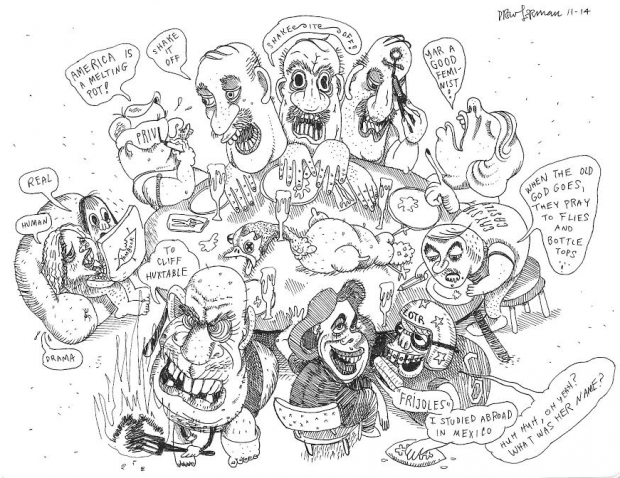 A surreal journey into the internet’s jabbering maw.

This is how to talk to your racist uncle about immigration reform: You use your favorite color Sharpie to scrawl “PRIVILEGE” across one of Grandma’s linen napkins and wrap it around your head like a blindfold. Tell him yams are from Africa. Tell him football is rugby for coddled American dweebs. Tell him that turkeys are from Turkey. Tell him haha no of course turkeys aren’t from Turkey idiot. Tell him that you studied abroad in Mexico and that’s why you can say frijoles like a boss. Smear stuffing on your pumpkin pie and garnish with green bean casserole. Chew it up, spit it into your hand, hold it aloft. Tell him America is a melting pot.

Mom distributes champagne flutes filled with gravy. Dad clears his throat. Shake it off, he says. We all sip. Shake it off, he admonishes us. We sip again. His pupils dilate. His breath quickens. Shake it off. We drain our flutes and gravy globs onto the residue of Movember mustaches. Dad closes his eyes, removes a stick of bright red lipstick from his breast pocket, and, hand shaking, draws a ♀ onto his forehead. You are a good feminist, we tell him, and we smile as his face unclenches.

You got stuck sitting next to your 23-year-old self. He gnaws on cornbread and croaks about Crystal Castles and Don DeLillo. He just got a cool music blogging gig in Brooklyn. It doesn’t pay anything but y’know it’s great exposure. He talks with food in his mouth and thinks he could realistically have a novel written and published before he turns 26. You snort a little and say oh no it’s nothing just the wine went down the wrong pipe. For the rest of the meal he mostly stares at his plate like a dumb sulky millennial.

14 Easy Side Dishes That, While Tasty, Will Not Make You Comfortable in Your Own Skin. 8 Days of Work as Usual Punctuated by Obligatory Dinners Back on Long Island. 6 Lies You’ve Told Your Family with Such Conviction That You’re On the Verge of Believing Them Yourself. 23 Tactics for Squaring Your Politics with Gifts Produced by Slave Labor.

Sasha and Malia won’t decorate the tree because they hate God. They won’t hang their stockings because they’re too busy spitting on veterans. Michelle taught them to hock good loogies from way in the back of their throats. I hear Sasha summoned Baphomet in the Lincoln Bedroom and they swapped verses from Bad Feminist. People say that Malia is working on a pilot with Lena Dunham, a dramedy about flawed but relatable black bloc anarchists. Sasha and Malia stay up late giggling at your Facebook pictures because who the hell do you think you’re kidding, and then they paint each other’s nails and ennumerate all the reasons why you don’t deserve love.

A good writer mines all the angles. Let’s see. Ivy. Holly. Green. Red—Redskins! Gotta get rid of that mascot y’all. It’s 2014 y’all. This is what a good ally looks like y’all. I think we’re ready to pitch to Salon.

Grandpa is stripped to the waist, burning his Cosby sweaters in the fire pit out back. We bring him a mug of Jell-O pudding. He pours it onto the frost-kissed lawn. To Cliff Huxtable, Grandpa says. He looks at us with pleading eyes but we don’t understand. To Coach Taylor, he says, and we decide that we know.

10,000 Rust Cohles ignore their children and key their laptops into Reddit. The kids say let’s go see The Hunger Games: Mockingjay –Part 1! Rust says Free Adnan. The kids say we hear that Steve Carell took a chilling Oscar-worthy turn with his performance in the psychological thriller Foxcatcher! Rust says There’s something Jay’s not telling us. The kids say we need to form an opinion about Interstellar because soon there will be no market for our hot takes! Rust says Real. Human. Drama.

I’m barricaded in the bathroom because Mom doesn’t even know that Twitter topples dictatorships. I sit on the toilet and try figure out if we’re in the lash or the backlash. That person from that thing died. Hahaha Niral’s cat got into the cranberry sauce! Fave! SOMEBODY is getting FIRED for that TWEET. Martin Freeman is 5’6” and Benedict Cumberbatch is 6’. The Thinking Woman’s Crumpet. #Ferguson. #DroneStrikes. #HipsterBooks. “Honey, are you okay in there?” “Fine, Mom.” Sweet electric communion! We understand OURSELVES by responding to the CONSTANT stream of CULTURE. This is what DISCOURSE looks like. “Is there enough Charmin left in there?” “Yes, Mom.” My skin grows taut, and then hot. The corners of my mouth pull into a smile, and I feel a seam split my cheeks. My mouth-hole opens all the way back to my ears. “You sure I can’t get you anything?” “FRESH VIRAL CONTENT. NEW LOOKS. ORIGINAL VOICES.” I see sparks. I see glowing green code. Face flesh melts like paraffin wax revealing the cyborg terminator skull below. This is it. This is it. This is it.