Digital meets the physical in one artist’s notion of utopias: lands both beholden to and acutely critical of technological potential.

“Utopia” can easily be used to describe any number of theoretical departures from the plane of ordinary existence. But if we were to actually envision it, what would it look like? Benjamin Edwards’ recent exhibition, System, provides us with a possible idea—alien, yet affording the uncanny feeling of having not traveled far at all. The Washington, D.C.–based painter has long been exploring the relationship between the realms of the real and imagined. When examined through the lens of technology especially, Edwards’ utopian landscapes—digital conceptions borne into physical existence—are at once dreamlike yet concretely familiar. 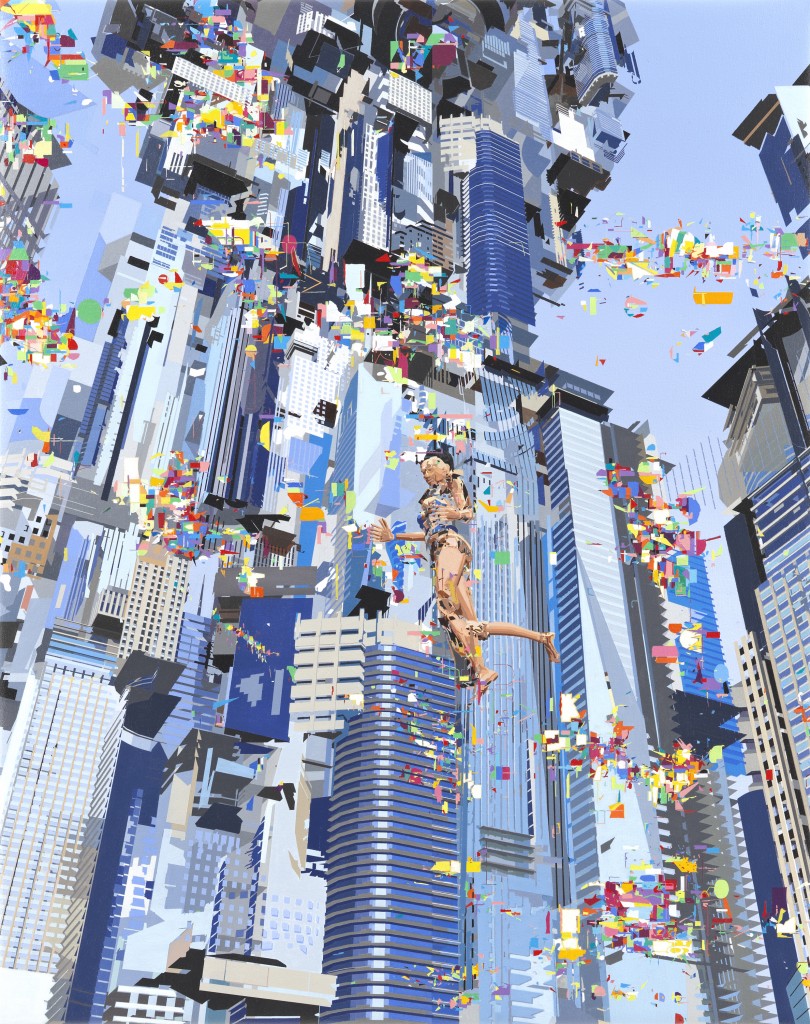 Edwards’ work has become notable for the harmonious way it both reveres and interrogates the relationship between the physical and digital. Originally from the Bay Area, he grew up in San Jose alongside the burgeoning high-tech computer companies of the 1970s. “I very early on had this merging of urbanism and suburbanism and the digital world,” he says. The idea that architecture and space could possess both physical and digital qualities deeply influenced Edwards’ development as an artist—fittingly, he was enamored of SimCity. “There was something about playing SimCity that was just magical for me,” he admits. This freedom to perfect and develop entire virtual environments inspired him to pursue the necessary technology to more fully merge the physical and digital worlds.

After completing his MFA at Rhode Island School of Design in 1997, Edwards taught himself 3-D modeling with the intent to digitally model his canvases, incorporating the technological process that would become central to his later work. “Doing work in 3-D virtual space really changed my mindset,” he says. “It’s a different way of imaging how to make paintings. You have this gray, default Cartesian gridded space and you can put anything in there…it’s thought up in this kind of vacuum.” 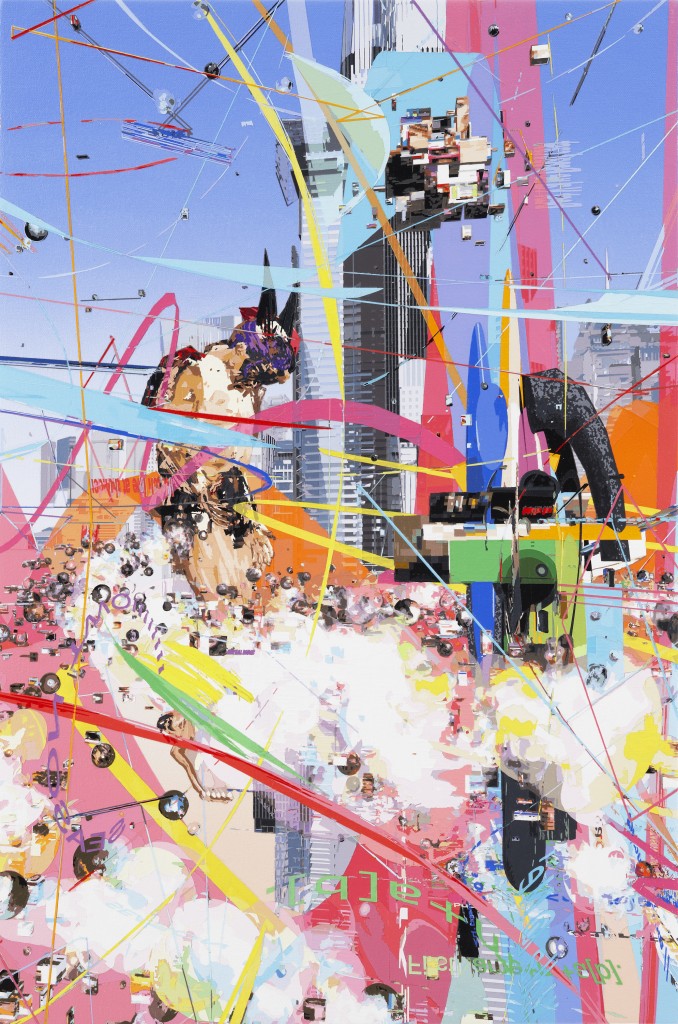 It is in this response that we may begin to understand Edwards’ treatment of the term “utopia.” At a first glance, it’s natural to see his work as a parallel idyll, devoid of human debasements and viscera, a two-dimensional alternative to the desecrations of our imperfect, 3-D world. But this notion may suffer from oversimplification: Edwards’ utopias are perhaps better understood along the axis of time, rather than space. The currency of his silent, underpopulated, over-saturated, tech-driven dream cities is potentiality itself. They are likely the places we envision when we discuss the future, that discrete timeframe designated for beautiful, technologically perfected solutions for use only by strangers in a distant land.

But while Edwards’ work produces a version of what a technological future could be, it is as much a nuanced critique of the processes that would deliver us unto it. Situated at the interstice of the physical and the digital, his paintings magnify that moment between present and future, reality and possibility, the mortal and immortal. His transformation of technological tools into the tactile tradition of painting forces us to consider how digital progress influences our physical and psychological experiences. “You can go out and take a walk in the woods, and have this physical experience of nature,” he says, “and yet there’s this other channel, this parallel world going on online. If you read Greek mythology, like in the Odyssey or in the Iliad, these heroes and characters—these mortals—are going about their lives, but the presence of the gods and the goddesses is always around. Sometimes they make themselves apparent to people, and sometimes they don’t. I find that similarity between mythological ideas and technological ideas to be interesting.” 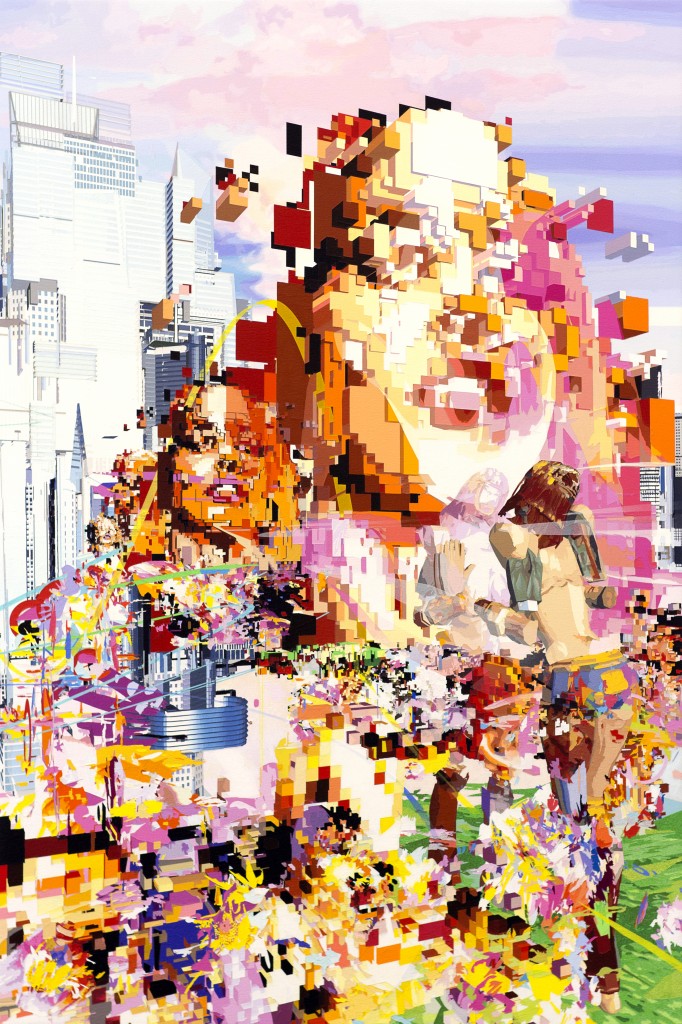 Edwards’ deification of the technological world may be unique to his early development alongside 1970s Silicon Valley start-ups, as someone who—unlike most millennials of only a generation later—was not born de facto into the strata of Facebook or Twitter. But his approach also touches on the grotesque, especially in his treatment of the human figure. Edwards’ digital modeling paradigm enables him to collect source material from a variety of online or software sources—World of Warcraft, Second Life, or Sims, for example—and amalgamate these “found” parts to create a human form. “I developed these scripts in the 3-D modeling software that would allow me to hit a button to give me a random compilation of body parts and textures, and instantly create a new character.”

His treatment of the human form as a random event of digital mysticism gives us pause to assess our own mortality, the arbitrariness of our bodies, their interactions in real space and time. “I see these figures as being somewhat confused as to their identity. Perhaps it’s a mixture of avatar and maybe trying to be human; maybe it’s more of a mythological presence or a technological presence.” It is strangely natural to empathize with these script-generated forms. “To be able to address issues of technology and psychology,” he adds, “any anxiety or emotional factors that we might feel about these things—I felt like you needed to have some sort of a human presence.”

Recombinant virtual characters aside, there is much to consider in the literal human presence within Edwards’ artistic process itself. Despite the technological tools he employs, the product is still very much a traditional painting: tactile, dimensional, imposing. His acrylic pieces are squarely thresholded between the physical and digital realms. The digital processes implemented—3-D model to vector image, vector image to vinyl stencil, vinyl stencil to canvas—enable intricate masking, rich and detailed color layering, and a very precise, near-exact transcription of his computer plan to the painting. “I’m a very detailed perfectionist sort of person, so that was a natural talent.” 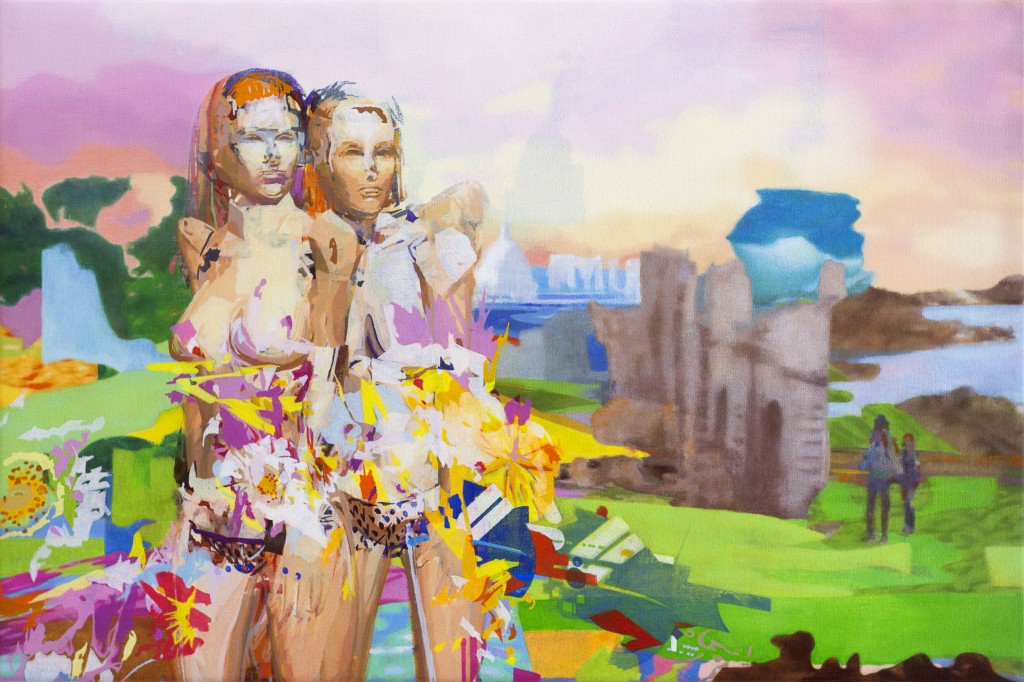 But, possibly made somewhat listless by these processes, Edwards recently shifted to oils, which demand a more natural, less perfectionistic style. “I’ve always preferred oil paint and the painterly qualities you can get,” he says, describing the shift as a motion toward “reinserting the artistic role.” By more strongly asserting the physicality of applying paint to canvas, he has created a different vantage point from which to assess the nature of the information age. “To address technological issues with technological media perhaps isn’t critical enough,” he says, “and risks embracing the ideology of using technology in the first place.”

In System, Edwards manages to create a utopia that is at once beholden to the technological advancement that can transport us there, but that is still acutely critical of the vehicle itself. “Constructing a painting is a visceral, human activity,” he says. “People need to have activities that anchor them in some kind of physical aesthetic experience, that’s not just digital surface. I think that my choice of aesthetic is related to that.”

System debuted at Kravets|Wehby gallery in New York, April 13–May 11. All images courtesy of the artist. All rights reserved.

Lauren E. Wool is a Ph.D. candidate in neuroscience, studying color vision and perception. She is also a photographer, examining Homo sapiens’ knack for the outré. She tweets about art, science, and their sometimes-interstice at @laurenewool. For more of her work, check out www.laurenwool.com. She lives in Brooklyn.